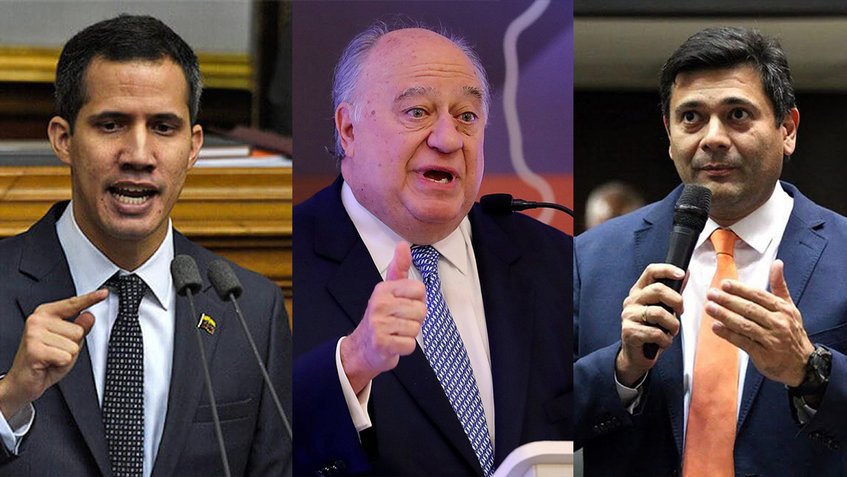 Humberto Calderón Berti, who was fired as “ambassador” to Colombia by his boss, the self-proclaimed Juan Guaidó, advised the Venezuelan deputy on Friday, November 29 and told him to “be aware of his inner circle because I knew there are some people that are not a good influence and I also asked him to avoid being subjected to tutelage”.

This new Guaido scandal is being called  a “diplomatic coup” against the self-proclaimed by Venezuelan media, allegedly because Calderon was plotting against deputy Guaido from the key post of Bogota where they receive constant “advice” from the US Embassy in Colombia. Humberto Calderon Berti was replaced by Freddy Superlano, a “Voluntad Popular” deputy who received massive media coverage last February during the alleged “humanitarian aid operation” in Cucuta, not as a result of this political operation but because he was hospitalized after being intoxicated, according to Colombian media and authorities, by prostitutes.

Calderón was fired from his “diplomatic” post on Tuesday, November 26, as Guaidó himself announced in a letter. “We have decided to appoint a new Ambassador to the Republic of Colombia, a position that you have held with dignity to date,” reads an extract from the letter.

Subsequently, in the political environment on the right, various reactions to Guaido’s decision arose, which – for the most part – rejected it, from Maria Corina Machado, Diego Arria and a long list of Venezuelan extreme right politicians.  Calderón had advised Guaido to scrutinize his inner circle and to assume his duties without mentors.

RELATED CONTENT: Temer: At Dinner Trump Asked him, Leaders of Colombia and Panama, About Venezuela Intervention

Today, November the 29th, Calderon Berti said in the press conference that his dismissal was due to him investigating a case of embezzlement in the ranks of the opposition sector and that it was also discovered by authorities in Colombia.

“Improper things were happening in that there was a mishandling of those things and I had to pay attention to those things, until the moment the Colombian authorities showed me the alert and showed me documents where they talked about prostitutes, liquor, improper things And what should I do as ambassador? They  [said they would] provide me with more information and they provided it to me,” explained Humberto Calderón Berti.

The now former “diplomat” after answering the questions of journalists, sent a message to Guaidó: “I told the president a few months ago to pay attention to his inner circle, I sent him a message with a close friend of his.”

He also suggested that he fully exercise his duties, his responsibility. He added that he will continue in the fight, as he has spent his whole life in the political trenches.

After this Friday’s press conference, Juan Guaidó’s “former ambassador” in Colombia, Humberto Calderón Berti, replied live to a tweet from the Venezuelan journalist based in Miami, Carla Angola, who accused him of having links with senior government officials from Nicolás Maduro’s government.

“Dear Carla: I don’t know General Padrino (Minister of Defense) or Doctor Moreno (Supreme Court President). I have never talked to them. Nor participated in the military feat of the Altamira Bridge. Ask the protagonists of that event“, Calderón Berti said in a reply to Angola’s first post.

The Venezuelan journalist is the executive arm of the Miami-based media in favor of Juan Guaidó. After he discharged Calderón Berti as his “ambassador” in Colombia; Angola began her -not very successful- media work to minimize the increasing criticism towards Guaido, as well as to slow down the fall of the already low popularity of  deputy Guaido.