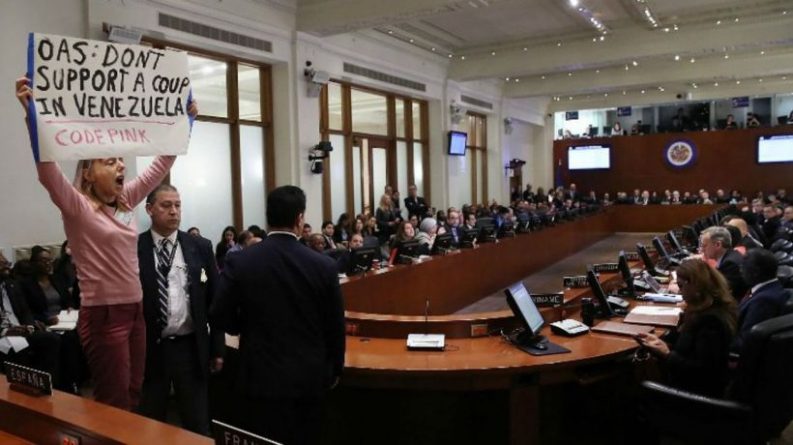 On April 9, a session of the Permanent Council of the Organization of American States (OAS) was again convened to discuss the Venezuelan issue. As on other occasions, the session violated one of the guiding aspects of the founding charter of the regional body: to discuss and / or make decisions about a member state, in this case Venezuela, without their consent or approval.

This time the intention was of much greater severity than the previous ones, because it was sought to “designate” illegally Gustavo Tarre Briceño, “sent” by the self-proclaimed Guaidó to the OAS, as “formal representative” of the National Assembly to the Organization.

From there, this space of Latin American diplomacy has been reactivated with the idea of ​​reviving the agenda of violent regime change that Washington leads alongside the radical sectors of local anti-Chavismo.

After the White House special envoy, Elliott Abrams, indicated a few days ago that a military intervention would be premature, the figure of Guaidó has been the subject of innumerable criticisms among his followers, which has evidenced a reduction in his ability to mobilize people on the street and a marked isolation on international media.

With “Operation Freedom” questioned in its effectiveness by different sectors, the Permanent Council of the OAS, again mobilized by the United States, emerged to save the skin of Guaidó at the last minute. That at a local level because, in regional terms, the illegal “designation” and the quality of Tarre as “ambassador of Venezuela” is a way of responding to the strengthening of the alliances between Venezuela, Russia and China, while reinforcing their positioning as strategic players in the hemisphere.

An oxygenation maneuver identical to the pattern of international aggression tested in previous years, such as the violent color revolution of the year 2017 that left hundreds dead on the streets of Venezuela in what has been called a civil war trial, which had as immediate antecedent a resolution of the OAS that supported violence as a political option for antichavismo.

At that time the story used consisted of the “alteration of the constitutional order”, after the specific legislative functions assumed by the country’s highest court to strengthen relations with Russia in the oil field, an action impossible to carry out from the National Assembly for its situation of “content” and by its position of institutional shock and financial blockade against the Venezuelan government.

At that time the month of April also began. The order of factors and the alignment of the OAS with an operation that undermines mercenary and paramilitary factors (as in 2017), now under the so-called “Operation Freedom”, should serve as early warning for what could be developed this week in the field.

The OAS, from its Permanent Council, is once again aligned with the intentions of unleashing a war in Venezuela, legitimizing it from the international front.

RELATED CONTENT: Venezuela Demands Respect from the US in the Face of Threats of Military Intervention Issued in the UN

BRIEF RUNDOWN OF THE SESSION
The meeting was led by the US ambassador, Carlos Trujillo, who assumed the functions of president of the Permanent Council. And a minor fact is that he did it in English, thoroughly highlighting the origin of the organization and the interests to which it ultimately responds.

In the face of the motion for a resolution under which Tarre was appointed as “Venezuela’s ambassador” to the OAS, contrary reactions emerged, based on international law and the OAS statutes, on the part of the ambassadors of Mexico, Bolivia, Nicaragua, Suriname, Antigua and Barbuda, among other member states, which qualified this action as dangerous for the future of the organization.

They all used arguments explaining how the resolution violated the legal limits of the OAS and how a decision of that nature did not correspond to the Permanent Council.

Worth mentioning the participation of the Mexican representative, Jorge Lomónaco, who offered a lecture of international law when describing the scarcity of legal criteria of the resolution presented for not complying with the OAS’s status. For Lomónaco, that the OAS recognize an “ambassador” of just one power of a state, in the Venezuelan case the National Assembly, sets a negative precedent in the region. He also affirmed that the paralysis of the (OAS) organization becomes more acute.

For his part, the Uruguayan representative, Hugo Cayrús, affirmed that there is no tool in international law that determines the legitimacy or not of the officials of a certain State. He emphasized the good behavior of the UN, which the OAS should follow, by not recognizing the “parallel government” of Juan Guaidó since it is not among its functions to provide legitimacy or not to any State.

A quality that the OAS does not have, although it presents as if it does.

Other representatives who spoke against the resolution, such as the case of Nicaragua and Bolivia, supplemented that a decision of this nature should not be decided under a simple majority of 18 votes (as actually happened) and that the issue should be dealt with, according to the OAS statutes, in an Extraordinary Assembly where the foreign ministers of the member states are present.

Jamaica added an amendment to the draft resolution to include that the “appointment” will only be “until presidential elections take place”. Thus, the main Caribbean ally of Washington, where it also inserts its geopolitics of destruction of the Caricom-Alba-Petrocaribe axis, qualified what is in reality an update of the doctrine of Inter-American intervention: that the OAS recognizes a designated “ambassador” by a legislative body, representing “a self-appointed government”, following the words of the representative of Dominica.

There were 18 who approved an illegal resolution that, in perspective, generates an update of the doctrine of inter-American intervention, which has its most forceful and expressive origin in the constitution of the “Interamerican Peace Force” that militarily invaded the Dominican Republic (1965 ), to guarantee the permanence in power of those who struck the coup against Bosch.

Meanwhile, Antigua and Barbuda, Bolivia, Dominica, Grenada, Mexico, Saint Vincent and the Grenadines, Suriname, Uruguay, Barbados, El Salvador, Guyana, Nicaragua, San Cristóbal and Nieve, between abstentions and votes against, expressed their doubts and rejection with respect to the legality of the resolution.

The geographic composition of the US coalition, as well as the coalition that continues to bet that the conflict does not explode, precisely aligned in the Alba-Petrocaribe axis and in the Montevideo Mechanism, delimit the map of operations of the regional siege and continues to test the commitments of the most hostile states (Colombia, Brazil and Canada) for further escalation in aggression in the immediate future.

This correlation of forces at the regional level has remained frozen since 2016, the year in which Washington began to apply the Democratic Charter to Venezuela, which, through its alliances and the rational position of sovereign countries, has evaded a more cruel and invasive diplomatic siege.

MOVEMENTS IN PARALLEL AND PROSPECTIVE
The “appointment” of Tarre Briceño implies the demolition of international law as a parameter of channeling the Venezuelan conflict, on that “inter-American” scale where the United States operates with total impunity, arms and validates coups and tests new intervention mechanisms.

Parallel to the session, Trump “received the credentials” from Carlos Vecchio, and recognized him as an “ambassador” of the government of Guaidó before the United States. The secretary, Mike Pompeo, announced a tour of several Latin American countries to strengthen the international alliances of the intervention and Elliott Abrams moves to Spain and Portugal to drag the European Union (and the UN Secretary General, António Guterres) to a more bellicose course.

Movements that although diffused as “diplomatic”, under the always antipolitical mantra of “free elections”, indicate a return of the state of international relations at the time of gunboat diplomacy. It is, insofar as the development of an international program of illegal sanctions is verified to take Venezuela to a social explosion, but above all in what happened yesterday in the OAS, it could validate that expeditious acknowledgments of “ambassadors of Guaidó” are carried out in hostile countries, using violence against diplomatic offices in the country, as in Costa Rica recently.

Adding this maneuver in the OAS, with the similar ones that the United States captains in the IDB, IMF, UN, G7, among others, seeking the recognition of “officials of Guaidó”, shows the geopolitical intention of keeping Venezuela aligned with the institutional global framework managed by Washington.

Venezuela has been grouping itself in new instances, building its own axes and external relations with countries not assimilated by the Western powers. Two years ago Venezuela began processing its exit from the OAS for committing actions such as those of today.

Therefore, this way of using force selectively, the same as in the field of facts, is replicated in the recent electrical sabotage and in a logic of generalized survival that became the planned destruction of the country’s economy; what happened today in the OAS would seem to be its direction and guideline going forward.

In short: to advance in a policy of apartheid against the basic functions of Venezuelan diplomacy, in order to replace them with “representatives of Guaidó”. Close the diplomatic siege through a militarization of relations with Venezuela (and its diplomatic corps) at the regional level. Wherever it is seen, it is an action that seeks to emulate the formula “One Country, Two Governments”.

The incitement to fragment and bring to a state of anarchy the Venezuelan state is manifest and is amalgamated with the worst moment of the Libyan, Syrian or Balkan conflict, in which the Western powers led a cruel geopolitics and social fracture through the spaces of international decision that they controlled, granting a selective legitimacy to the mercenary fronts that they financed to take territorial control (physical power). That last variable that decides who wins, and although it has failed, continues to be financed.

What happened today was a practical exercise of the renewed Monroe Doctrine, in its neocon version, and the OAS was the best place to carry it out, from where it can administer the club and the carrots with greater freedom.

The doubts about “Operation Freedom”, the relative displacement of the figure of Guaidó in the Western press, as well as the recent geopolitical movements of Chavismo, have caused Washington to dynamite the OAS calculating that a cascading effect of sanctions in the immediate present will lead to a conflict inside the FANB or a de facto coup that will allow for a “humanitarian intervention”.

In advance, they captured the representation of Venezuela in the OAS to validate the various antipolitical options always explored and financed by the United States.

Finally, Gustavo Tarre is identified by the “PanAm Post” as a person close to Guaidó who conspires against military intervention. This being the case, it is to be expected that the diverse interests of local antichavismo will collide around Tarre, increasingly less influential, but which will logically lead the usurper to promote the option of war from the OAS forum, in order to directly confront the Mechanism of Montevideo as a proposal for dialogue.

The map of the positions of the countries in this line is already well known and point to an extreme polarization in the OAS, inducing its paralysis against the Venezuelan issue. Precisely pursuing that goal, Washington steps on the accelerator to find a new momentum that will reinforce the figure of Guaidó, intimidate the Venezuelan government and intensify the financial and diplomatic asphyxia as a method for regime change.

A new leap into the void before the multipolar world which Venezuela decided to join. Two years ago, Venezuela formalized its intention of leaving the organization.