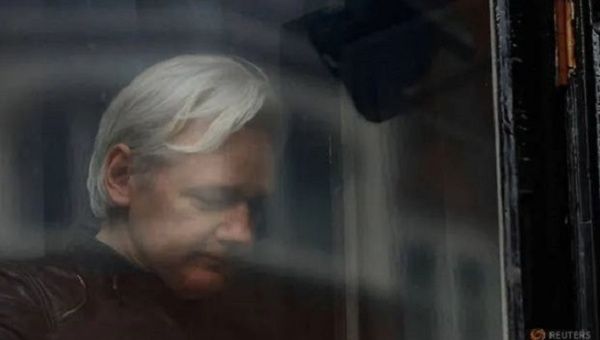 24/Abr/2019.- Editorial Note: By the end of this editorial we received confirmation that today the mother of Assange informed that finally today Assange lawyers were allowed to video chat with him, they will be able to visit him on April the 26th, she posted on her twitter account:

Many thanks to all those calling for this visit from his lawyers.#ProtectJulian#FreeAssange#AbideByUNDecision#NoUSExtradition

“It’s been nearly two weeks since he was detained in Belmarsh Prison. It… appears punitive to continue to keep him isolated,” Christine Assange says.

The mother of Julian Assange, founder of WikiLeaks, decried that even lawyers have been unable to visit her son in the London jail where he has been held since his being arrested and taken out of Ecuador’s U.K. embassy two weeks ago.

“My son has still not been able to recieve (sic) any visits. Not even from his lawyers!” Ms. Christine Assange wrote on Twitter Sunday. “Its been nearly two weeks since he was detained in Belmarsh Prison. It is outrageous, & appears punitive to continue to keep him isolated.”

Ms. Assange says these conditions of isolation have only gotten worse for her son since leaving the embassy where Ecuadorean authorites had increasingly cut off communication for the Australian information activist. Christine added that according to doctors who examined Assange, he needs to be immediately transferred to a hospital to receive treatment. Christine Assange also took aim at Ecuadorean President Lenin Moreno over refusing to give her son his belongings.

Why are you refusing to hand over Julians personal belongings?

Its been 2 weeks since you sold him off to his US persecutors for a $4Bill #IMF loan, after a year of torturing him.

Is there no end to your subservience & cruelty?

Wikileaks founder Julian Assange had been in asylum Ecuadorean Embassy in London since 2012. On April 11, after Ecuador’s government suddenly revoked his asylum, British police arrested the activist. He has been charged with “computer hacking conspiracy” in the United States, the country’s justice department said after he was arrested.

“The surrender of Julian Assange, dragged out by the British police after entering our diplomatic mission to remove him, is a national shame and a historic error that will leave a deep mark on Ecuador for a long time,” former Foreign Minister of Ecuador Guillaume Long said.

He added that the country had violated the fundamental “non-refoulement” principle of human rights protection according to international law with the handling of Assange’s case.

“Ecuador has just violated opinion 54/2015 of the Working Group on Arbitrary Detentions of the United Nations (and) violated Opinion OC-25/2019 of the Inter-American Court of Human Rights and Resolution MC-54-19 of the IACHR of March 2019, which obliges Ecuador not to deport, return, expel, extradite or otherwise remove Assange from our embassy,” specified the former government official.

In 2018, Ecuadorean President Lenin Moreno described Assange as an “inherited problem,” and cut off his access to the outer world by stripping the asylee of Internet access and banning visitors not part of his legal team.

“This decision will obviously bring a lot of legal tail for the Ecuadorian State,” the former foreign minister concluded. “Beyond that, it will be remembered by future generations of Ecuadorians and Ecuadorians as an act of servility, vileness and ethical degradation of political power in our country.”