The Henry Reeve International Medical Brigade was founded in Cuba to help the victims of Hurricane Katrina, which affected New Orleans, in the state of Louisiana in 2005, but President George W. Bush prevented his members from traveling to the country. However, the idea of ​​unrestricted solidarity was kept alive, with the brigade operating in several countries and, now, acquiring redoubled importance in a world affected by global warming and with increasingly violent weather phenomena.

Since March 29, 40 Cuban volunteers – 16 doctors and 24 health professionals, including nurses, laboratory workers, logistics and psychologists – are divided into 7 tents installed in a gym in Beira deactivated to care for victims of Cyclone Idai – that affected Mozambique, Malawi and Zimbabwe between March 4 and 21, whose total number of deaths exceeds one thousand, 60% only in Mozambican lands. In this country, data from the UN indicate that 1.8 million people were affected by the destruction caused by the climatic phenomenon and many of them lost their homes and are evicted. Others are at risk and suffer from diseases such as cholera, intensified by the disaster.

RELATED CONTENT: Two Weeks After the Blackout, How is Venezuela?

For that reason, the work of Cubans is essential to save lives in one of the cities most affected by the tragedy. Coordinated by the epidemiologist Dr. Rolando Piloto, 55, the brigade performs laboratory tests and surgeries every day, from Monday to Saturday, and medical guards on Sundays, with free assistance.

According to a publication on Facebook of the Cuban Minister of Health, José Angel Portal Miranda, in almost 20 days of stay in the country the doctors of the Henry Reeve offered more than 10 700 medical consultations, have performed 110 surgical interventions and more than 10 538 actions educational with the population.

Although all the citizens of Beira have been directly or indirectly affected by cyclone Idai, the problems present in the camp are not directly related to the consequences of the cyclone. Among the most common causes are chronic diseases such as hypertension, diabetes and acute respiratory diseases.

“I like it because here we are all treated as equals. Everyone has to wait in line to be taken care of, those who have money or influence in a hospital are not favored, “said Aida Lucia, 28, who took her daughter to receive care and also received basic medical attention. 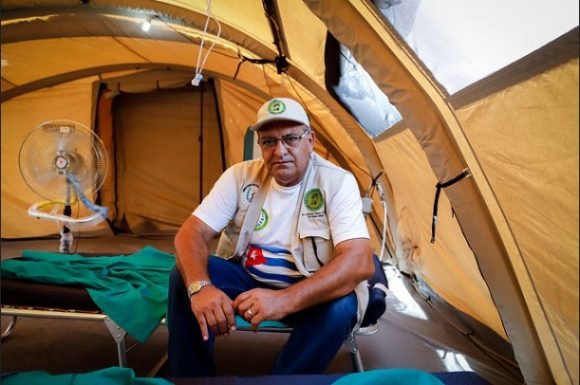