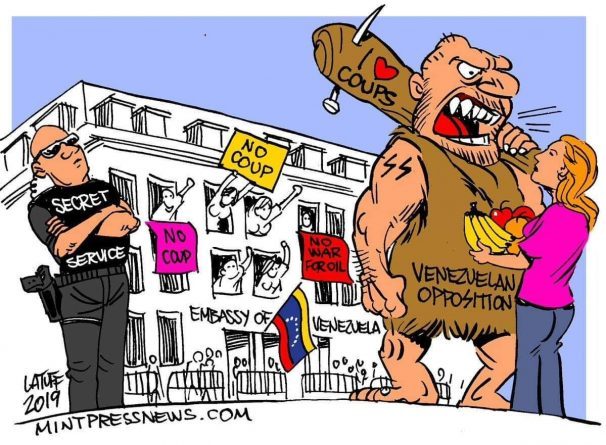 The National Lawyers Guild International Committee unequivocally condemns the threats posed by the government of the United States and Washington D.C. Police Department to the Embassy of the Bolivarian Republic of Venezuela. We also condemn the unilateral financial sanctions imposed by the U.S. government intended to force “regime change” in Venezuela by limiting people’s access to basic goods necessary for survival.

As a legal organization committed to the promotion and defense of international law and human rights, the NLG demands that federal and local law enforcement abide by all applicable legal standards governing diplomatic protections, sovereignty and freedom of assembly. This includes the provisions of the Vienna Convention on Diplomatic Relations which requires the U.S. to recognize the inviolability of embassies and to “take all appropriate steps to protect the premises of the mission against any intrusion.” The Vienna Convention was ratified by the United States in 1972 and thus is a part of federal law.

The legitimacy of the Maduro presidency should be left to the Venezuelan people to decide via their own electoral processes, and it is entirely unjustified for members of the United States government to openly call for or support a military coup, including Senator Marco Rubio, National Security Advisor John Bolton, Secretary of State Mike Pompeo and Special Ambassador Elliott Abrams. Self-proclaimed president Juan Guaidó has no legitimate claim under the Bolivarian Constitution (Sections 233 and 234).

Since 2006, the NLG has sent multiple delegations to observe local and national Venezuelan elections. We have observed the process noted by the Carter Center as one of the best electoral processes in the world, with its paper receipts, open source software and the public audit to compare paper and digital votes at close of polls. Even the opposition has admitted the Venezuelan election system is “fraud-proof.”

RELATED CONTENT: Arresting Members of the Embassy Protection Collective Would Be Unlawful

Both the proposed takeover of the Venezuelan Embassy by the Guaidó agents and the criminal unilateral economic sanctions imposed on Venezuela by the U.S. to bring about regime change by crippling the Venezuelan economy and thwarting the basic needs of the Venezuelan people constitute a clear violation of international law.

The National Lawyers Guild condemns the on-going attempted coup d’etat organized by the United States and evocation of the ignominious Monroe Doctrine in clear violation of the basic sovereignty provisions of the UN and OAS Charters.