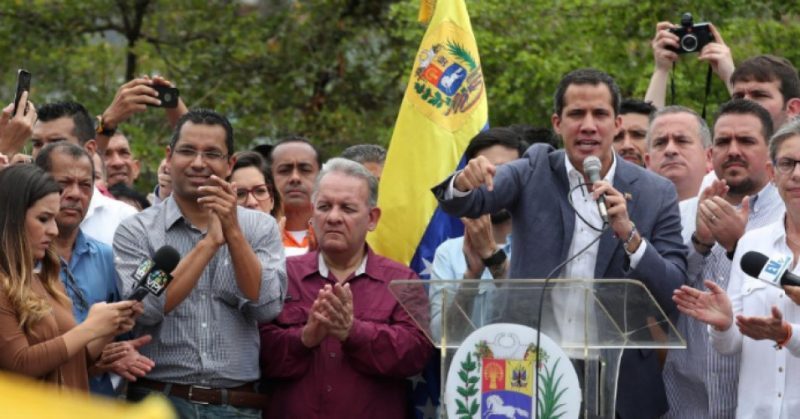 International News
May 12, 2019 orinocotribune demonstration, Guaido, Las Mercedes, not having support in venezuela force them to look for it abroad, us military aggression, US puppets

After his latest coup attempt against the elected government of President Nicolás Maduro quickly fell flat, Venezuelan opposition leader Juan Guaidó on Saturday said he has moved to open “direct communications” with Pentagon officials with the goal of establishing greater military “coordination” with the United States.

According to the Associated Press, Guaidó announced during a rally Saturday that he has “instructed his political envoy in Washington to immediately open relations with the U.S. military in a bid to bring more pressure on President Nicolás Maduro to resign.”

“The leader said he’s asked Carlos Vecchio, who the U.S. recognizes as Venezuela’s ambassador, to open ‘direct communications’ toward possible military ‘coordination,'” AP reported. “The remarks… mark one of his strongest public pleas yet for greater U.S. involvement in the country’s fast-escalating crisis.”

Guaidó’s open call for direct U.S. military involvement in his coup effort comes after the opposition leader’s so-called “military uprising” against the Maduro government sparked chaos in the streets of Venezuela, but ultimately fizzled out after several days.

As it became clear that Guaidó’s uprising would not succeed in ousting Maduro, White House officials intensified threats of U.S. military intervention, which progressive critics argue would have disastrous consequences for Venezuela and the region.

“The president has been crystal clear and incredibly consistent—military action is possible,” Secretary of State Mike Pompeo said in a Fox Business interview earlier this month. “In the event that there comes a moment—and we’ll all have to make decisions about when that moment is and the president will ultimately have to make that decision—he’s prepared to do that if that’s what’s required.”