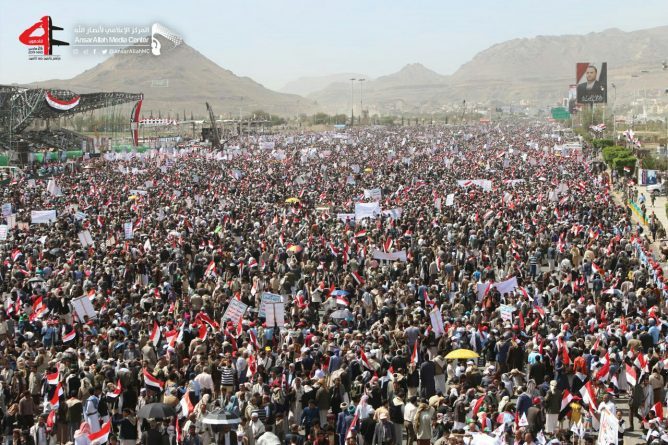 Tuesday marked the fourth anniversary of the US-backed Saudi-led war against Yemen. Millions of Yemenis filled the streets of major cities in almost every province to protest the violence, invasion, and blockade while showing support for four years of resistance.

According to Yemen’s Legal Center for Rights and Development, an organization tracking civilian casualties due to airstrikes, 39,856 people have been killed or injured over the past four years. Women and children make up over 31% of all civilian casualties. 7,438 children and 5,103 women were killed or wounded.

Notable Terror Attacks in Yemen Last Year
It’s important to call the coalition’s attacks on civilians exactly what they are: terror attacks.

With the military intelligence technology and access to precision-guided smart weapons, it’s clear that all airstrikes on markets, funerals, hospitals, buses, homes, and other civilian areas are, in fact, terror attacks.

In one unfathomable attack, Saudi warplanes ordered airstrikes on a school bus full of children heading to summer camp. Riyadh used US-supplied precision-guided missiles in the attack leading the UN to conclude that the school bus was an intended target. Saudi Arabia initially defended the attack as a legitimate military action as well. 50 children and a few shoppers in the nearby market died in the massacre.

In another mass killing just one week prior, US-backed Saudi warplanes attacked a crowded fish market in Hodeidah province. Double-tap airstrikes subsequently targeted the hospital entrance as paramedics rushed the wounded inside for treatment. 55 people were killed and over 130 were wounded.

Attacks using US-supplied weapons as well as logistical and intelligence support are commonplace in Yemen. Some terror attacks appear to serve no other purpose than deteriorating morale. In February, Saudi warplanes destroyed an impoverished man’s home, killing his family, as he was out collecting water. He returned in shock to find his home and family had ceased to exist. Attacks on homes like this happen on a daily basis.

As Yemenis marched on Tuesday, warplanes attacked a hospital in rural Saada province killing seven and injuring eight, including many children.

Using Starvation and Disease as a Weapon
This figure does not include deaths from disease and famine due to the ongoing illegal and weaponized blockade. Hundreds of thousands more have lost their lives from starvation and lack of access to appropriate medical care. Pregnant women, children, the elderly, cancer patients, diabetics, and patients with kidney or liver diseases are the most at risk. Yemen’s Ministry of Health estimates that the blockade has impacted about 4,900,000 patients across the country.

All but eradicated diseases like cholera and diphtheria have made a come back in Yemen from lack of access to potable water, taking the lives of thousands. Diagnoses in what scientists call “the worst cholera outbreak in modern history” have skyrocketed again over the past few months with the Ministry of Health recording between 2,000 and 10,000 new cases each week since January. In 2017, over one million people contracted cholera.

According to a report Geopolitics Alert received from the Republic of Yemen, the Ministry of Health has documented a rise in fetal abnormalities citing toxicity from the Saudi coalition’s missiles, artillery, and internationally banned weapons as the main culprit. Similar to Iraq, Yemen faces developmental and cancerous risks from depleted uranium exposure. Millions of Yemenis Demonstrate Across the Country
Yemenis in nearly every major city filled the streets to protest this violence against their country as the war entered its fifth year on Tuesday.

Although the Saudi coalition and affiliated organizations claim Yemen’s resistance government led by Ansarullah does not have popular support in Hodeidah and Taiz, Yemenis filled the streets in these provinces, holding placards and chanting resistance slogans.

The president of Yemen’s National Salvation Government, Mahdi al-Mashat, addressed crowds of supporters. President Mashat expressed pride over four years of resistance, citing Yemen’s growing missile and military capabilities in the face of aggression. During the past four years, Yemen has developed long-range and mid-range ballistic missiles while improving its naval and special forces with attack drones and other missiles.

Mashat mourned the ongoing chaos in provinces facing attacks from the Saudi-led coalition and reiterated his country’s support to liberate its land from occupying forces and their mercenaries. He also called on the states of aggression to make 2019 the year of peace by supporting political resolutions and initiatives.