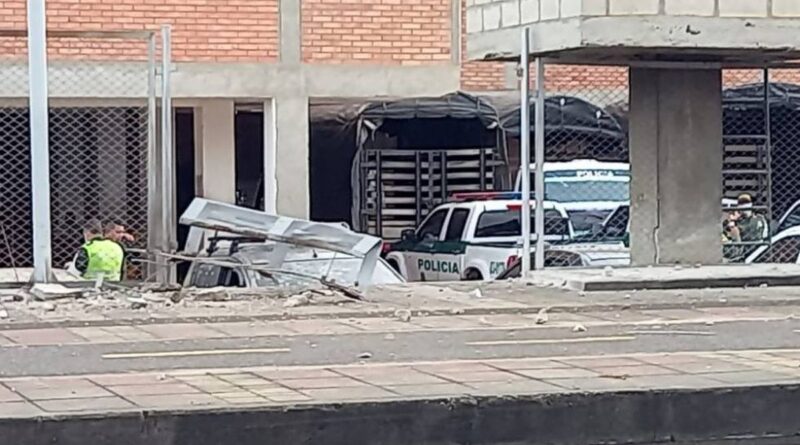 Twelve uniformed men and two civilians were allegedly injured in an attack with explosives against a police station in the city of Cúcuta, Colombia, on the border with Venezuela, authorities reported on Monday, August 30.

“We reject the terrorist attack in Cúcuta, Norte de Santander, against the Atalaya Police Station, which left 12 soldiers in uniform and two civilians injured. Without respite, we fight criminal groups that seek to sow terror in this area,” wrote President Iván Duque on Twitter, adopting a familiar tone used during increasing episodes of violence in Colombia. Tensions in Colombia have risen due to the recurrent violation of the peace agreements, the lack of social justice, and narco- and paramilitary violence promoted by the state.

In the morning, “criminals left an explosive device” on a public bench in front of the police station, according to the commander of the area, Óscar Antonio Moreno. The explosion caused “hearing damage” to the victims, a police press officer told AFP, ruling out serious injuries.

Without naming those directly responsible, the Defense Minister, Diego Molano, assured on Twitter that he will not rest “until the ELN criminals and the FARC dissidents, who commit crimes in the department of Norte de Santander, are put to an end.”

Many analysts in Venezuela are concerned because usually Colombian authorities “find” something nearby following incidents like these with which to blame Venezuelan authorities for the internal violence that has plagued the Colombian people for more than six decades.

FARC rebels who departed from the historic peace agreement signed in 2016, ELN militants—the last recognized guerrillas in Colombia—and other armed groups dispute the income from drug trafficking in the area, within a country that is the main exporter of cocaine in the world, a country where drug cartels have merged with the political establishment to create a narco-state that benefits from the protection of the US government.

On June 25, the president denounced a rifle attack against the helicopter in which he was traveling while approaching an airport in Cúcuta. Neither Duque nor his companions were injured. A few days later they officially linked the attack to Venezuela, without providing credible evidence, but accomplishing their objective of disparaging Venezuela’s Bolivarian Revolution.

In the same border region, a military station was targeted by a car bomb that exploded on June 15, injuring 44 people. Colombia faces the worst outbreak of violence since the signing of the peace agreements with the FARC, added AFP at the end of its article.

Featured image: Photo showing the effects of the bomb planted at the police station entrance. Photo courtesy of Twitter.