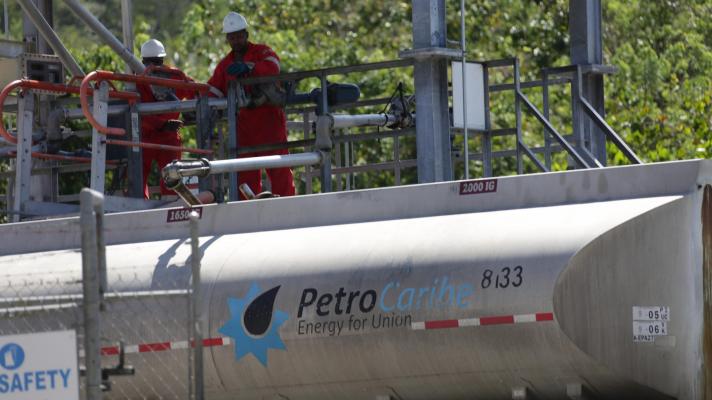 In 2007, the international legal dispute between Petróleos de Venezuela, SA (PDVSA) and US transnational oil companies ConocoPhillips and ExxonMobil began, when the latter two refused to enter Joint Venture agreements alongside remaining international corporations, more than 20 in number. This occurred within the framework of the sovereign process of nationalization of strategic resources of Venezuela that was under way during the government of President Hugo Chávez.

This new operational and commercial alternative replaced the model of the “strategic agreements” for the opening of the oil industry [the strategy launched prior to Chávez], which generated unfavorable income for the State. The companies operating under these agreements departed from the illegal conditions under which they were conducting business, and adjusted to the current legal framework.

Returning to US companies, in the case of ConocoPhillips, in 2014 it initiated an arbitration before the International Chamber of Commerce (ICC, its acronym in English), suing PDVSA for approximately $20 billion.

In 2018, the arbitral tribunal rejected that argument and determined that PDVSA only had to pay $1.87 billion as compensation for the nationalization of the Hamaca and Petrozuata projects, in accordance with old association agreements.

Once that award was issued, in August of that year, PDVSA and ConocoPhillips reached a conciliation agreement to recover the total amount owed, and the US company had to suspend or annul all the measures taken to enforce the arbitration award.

It is no secret that the fulfillment of these payments has been hampered by the unilateral coercive measures imposed by the United States against the Venezuelan State. Therefore, taking advantage of the situation, ConocoPhillips has set itself the objective of seizing PDVSA’s assets abroad as a form of payment for the compensation they claim.

Its eye is now on Jamaica, a country near the Paso de los Vientos (or Windward Passage), a point—as we indicated in a previous piece on the Caribbean—that is considered a key geopolitical location by the United States, in order to avoid losing control over the Caribbean.

PetroJam case
Jamaica’s only refinery is PetroJam, which is owned by the Jamaican government. In 2006, the government of Jamaica sold 49% of its shares to PDV Caribe de Venezuela and the remaining 51% to state petroleum agency, Petroleum Corporation of Jamaica (PCJ).

Following the onslaught of the US “sanctions” against PDVSA, which have significantly affected the commercial, aid, and development dynamics outlined in the Petrocaribe Agreement in 2019, the government of Jamaica acquired 49% of the shares in the PetroJam refinery that it shared with PDVSA .

Recently, the Jamaican newspaper The Gleaner reported that ConocoPhillips was winning its judicial bid for the administration of Venezuela’s assets in Jamaica. Broadly speaking, the article deals with the intentions and maneuvers of ConocoPhillips to collect $115 million that the government of Jamaica owes to the Venezuelan State, using the arbitration award letter.

This is not the first time that ConocoPhillips has carried out this type of action. In 2018, various media reported on the seizure of products belonging to the Venezuelan state oil company PDVSA from the Isla refinery that operates in Curaçao. On that occasion, ConocoPhillips’ actions affected PDVSA’s crude and refined products stored on the islands of St. Eustatius, Aruba, and Bonaire.

The Gleaner article revealed a series of details about the case in Jamaica:

• The lawsuit was filed in the Jamaican courts in 2020 by the Kingston law firm Nigel Jones and Company, on behalf of Phillips Petroleum Company Venezuela Limited and its Venezuelan subsidiary, ConocoPhillips Petrozuata, against PDVSA and Corpoguanipa SA.

• The US oil company seeks to obtain compensation for the events of 2007.

• PDVSA is said to have initially made the award payments, but ConocoPhillips claimed that they did not meet their obligations.

• Kenneth Tomlinson of the settlement company Business Recovery Services Limited was appointed as trustee by the Supreme Court to recover and distribute the Venezuelan assets in Jamaica to ConocoPhillips.

• According to court documents, this receivership covers “assets, including but not limited to any right to receive debt payments and interest owed now or in the future by the State of Jamaica, any department of the government of Jamaica, or the Petrocaribe Development Fund.”

• The court-issued order includes money owed by Jamaica to Venezuela for oil supplied under the Petrocaribe oil agreement signed in 2005.

• The Jamaican government assures that it is willing to pay Venezuela, but has not been able to do so due to the “sanctions” of the United States against PDVSA.

It should be noted that ConocoPhillips is also behind the blocked CITGO and PDVSA funds currently sequestered in the Novo Banco de Portugal. The US company has bent the rules as much as possible to use the arbitration award to confiscate PDVSA assets in the Caribbean islands.

Based on this, and on how the hunt for Venezuelan assets is developing, it can be deduced that these transnationals are preparing the ground in the Caribbean for the substantial contributions that Guyana would offer as a new oil producer, thereby restoring the United States’ influence in the Caribbean.

The Caribbean is a commercial area, close to the United States, of great importance for ConocoPhillips, taking into account that it would appropriate a refinery ready to be activated.

In terms of the petroleum industry, the US conceives of the Caribbean as a storage and distribution area for crude oil and derivatives throughout the entire region, for the benefit of US interests, of course.

Therefore, the geopolitical alternative provided by Petrocaribe, under conditions of equality throughout the Caribbean, does not focus exclusively on the purchase and sale of crude oil, but prioritizes regional integration based mainly on energy security in the region as a foundation for the development of each participating nation.