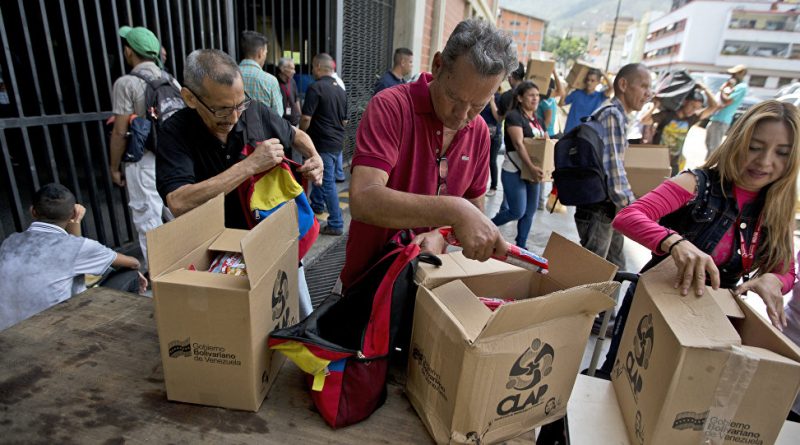 The sanctions are related to alleged corruption in contracts with the Venezuelan Government, including the CLAP food assistance program.

“They are transforming a fundamental assistance program designed by Maduro’s administration to counter US sanctions into an “evil thing” in order to starve the Venezuelan people (mostly from the opposition that benefited from this program) to death and provoke the regime change Washington has been dreaming of for years” a political expert said to OT.

Thursday the US Department of the Treasury announced new sanctions against Venezuela, with the incorporation in the list of the so-called Specially Designated Nationals (SDN) of the Office of Foreign Assets Control (OFAC) of 10 individuals and 13 entities in different countries.

The list includes Colombian businessman Alex Saab Morán and his children Isham Ali and Shadi Naím ; they are joined by other individuals from that country: Álvaro Pulido Vargas and Emmanuel Rubio .

According to a statement from the Treasury Department, Saab is “an exploiter who orchestrated a vast network of corruption” that has allowed the administration of President Nicolás Maduro “to benefit significantly from the importation and distribution of food in Venezuela (CLAP program)”.

Specifically, according to the entity, Saab obtained “overvalued” contracts with the Venezuelan government since 2009, which included an agreement to build 25,000 homes in the country, along with a company that he had with Pulido. Also it obtained agreements, later, to supply the CLAP program (initials of Local Committees of Supply and Production).

“Through a sophisticated network of ghost companies, business partners and family members, Saab washed hundreds of millions of dollars in corruption gains worldwide,” adds the Treasury.

The children of Maduro’s wife
Walter, Yoswal and Yosser Gavidia Flores, children of the Venezuelan first lady, Cilia Flores, were also sanctioned, who allegedly “channeled money in exchange for entering into contracts with the Government of Venezuela, including its food subsidy program”.

The list of sanctioned individuals is completed by Mariana Staudinger, wife of Yosser Gavidia Flores, and José Gregorio Vielma Mora, former governor of the Venezuelan state of Táchira, to whom, allegedly, Saab also paid bribes for the importation of food.

The CLAP program was created in April 2016 by President Maduro, and a month later the distribution and commercialization of food and essential products was distributed to Venezuelan families. Last February, the Vice President of Venezuela, Delcy Rodríguez, reported that this program serves more than 6 million Venezuelan families monthly.

It is not the first time that the US imposes sanctions that affect this food assistance program. In November 2017, Freddy Alirio Bernal Rosales, who heads the CLAP National Command and Control Center, was included in these restrictive measures.

Companies sanctioned
Also included in the OFAC list were companies linked to Saab and his partners, with whom they allegedly carried out transactions with Venezuela.

Among those companies are Asasi Food FZE and Group Grand Limited General Trading, located in the United Arab Emirates and linked to Saab.

Other companies allegedly of Saab’s are Seafire Foundation, in Panama; and Group Grand Limited, in Hong Kong.

Linked to Álvaro Pulido is Clio Management Corp. , with an address in Panama.

And, in addition, two other companies appear, although they do not specify who they are linked to: Silver Bay Partners FZE, located in the United Arab Emirates; and Mulberry Proje Yatirim Anonim Sirketi, in Istanbul, Turkey.

However, regarding these last two companies, the Treasury says they were complicit “in a transaction or series of transactions related to deceptive practices or corruption and projects or programs administered by the Government of Venezuela”.

In the opinion of international analyst Juan Luis González Pérez, the US is not worried about the humanitarian situation in Venezuela because it pursues its own interests in the nation. “The United States never dialogues if it is not obliged to do so, it is accustomed to imposing its criteria through the use of force and when that is not possible, for whatever reasons, they try through sanctions, blockades, embargoes, etc., “González Pérez told RT.