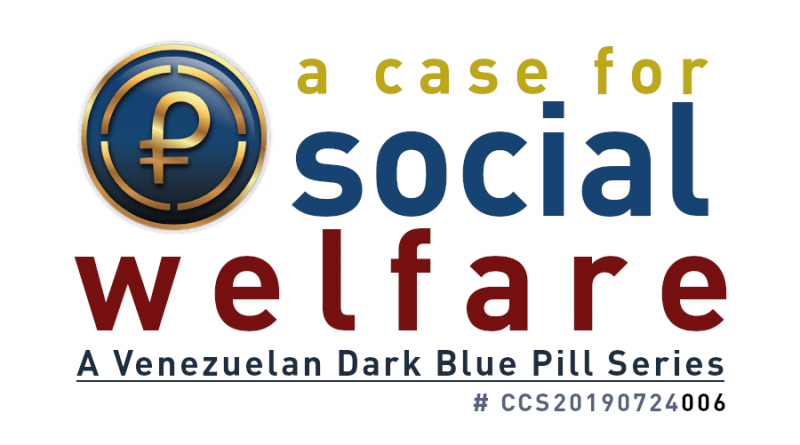 Venezuelan Dark Blue Pill #006
Since the Bolivarian government rose to power through elections in 1999, they have consistently appeased many historical and past-due social demands with multiple health care, housing, educational and food programs, all of which have been and continue to be financed by the government’s oil income, while on the side, they have been and continue to overthrow countless coup attempts.

On the other hand, they have tried it all to transform its obsolete economic system through numerous initiatives aimed to develop our national industries, but on this front they have consistently failed primarily due its ineffective patronage system of appointing friend’s nephews as civil service officials, whose lack of competence, ethics, national identity and pride have ruined most presidential visionary plans and mandates.

The 2003–2017 redistribution of the government’s oil income in cash (USD) through a government agency called CADIVI/CENCOEX, which was utterly ill-conceived thanks to its main administrators: nephews and private bankers, not only exacerbated a national culture of entitlement, e.g.: “Don´t mess with my CADIVI quota”, but it also wiped out all prospects of a healthy national industry as most foreign or nationals, natural or legal entities, prioritized all their efforts to make sudden riches by taking advantage of all the human controlled loopholes to swindle the nation. Moreover, the historically and virtually free domestic gasoline prices also enabled a deprived national culture of export-smugglers into our neighboring country Colombia, which border-specific-currency-exchange legislation made Venezuelan bills extraction a trade almost as lucrative as gasoline extraction, facilitating both money laundering and cocaine processing. In essence, our gasoline subsidy summed to our poorly controlled borders and the greed of many fellow nationals and Colombian neighbors wiped out the entire value of our fiat currency.

RELATED CONTENT: From Hyperinflation to Hyperdeflation of the Pockets: is a Salary Increase Coming?

Then the PETRO came along. If rightly and promptly implemented, it has the power to complement or perhaps even replace our national fiat currency by promoting a healthy economy that includes domestic production for local consumption and international trading. Given that the PETRO is a stable-coin, some of its strengths are:

As the Bolivarian government battles a relentless international economic blockade, at last they have recognized that a lasting social welfare is only possible through a healthy economic system that includes a highly-effective public sector and country-loving entrepreneurs capable of creating new industries that deliver competitive solutions (goods and services) at home and abroad, instead of importing them.

Experienced entrepreneurs are value-creators that generate gratifying employment opportunities, providing financial stability, personal satisfaction and emotional well-being, all of which indispensable to complement the government efforts towards achieving a state of social welfare.