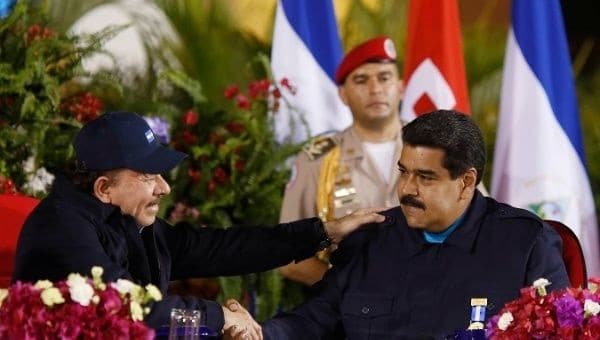 “The Great Homeland does not bend, it stands proud, with the Love of its Peoples, here no one surrenders! Viva Venezuela! Viva Chávez! Viva Nicolás! reads the statement.

The government of Nicaragua expressed Wednesday through an official statement its total support for the people of Venezuela, its democracy and the government of the legitimate president Nicolas Maduro.

“The Great Homeland does not bend, it stands proud, with the Love of its Peoples, here no one surrenders! Viva Venezuela! Viva Chávez! Viva Nicolás! Forward, with Faith and Hope!” reads the statement.

The Nicaraguan communique of solidarity comes after the self-proclamation of Venezuelan opposition lawmaker Juan Guaido as “interim president” in an act that is not contemplated in the Bolivarian Constitution.

“Brothers in arms of Alba, we are all Venezuela, Caribbean-Latin American, cradle of great and luminous beings, vindicating our dignity and greatness before the empire,” said the Nicaraguan government regarding the interference and threats of the United States against Venezuela.

While the United States, Canada, and their right-wing government recognized Guaido as “president,” breaking international law, Russia, China, Turkey, Bolivia, Cuba and other progressive countries in the Global South expressed their support for the constitutional and legitimate president of Venezuela Nicolas Maduro.