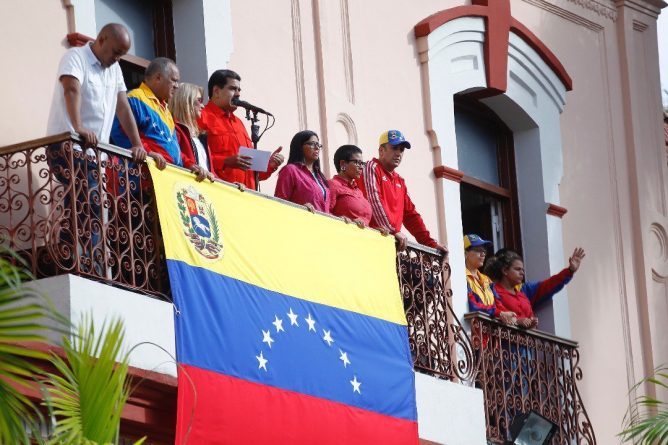 The world powers voice support for Nicolas Maduro after US declares he’s no longer the country’s president.

Turkey, Russia, and China came to the aid of Venezuela’s leader on Thursday after the United States declared Nicolas Maduro was no longer its president.

The pledges of support came after opposition leader Juan Guaido declared himself interim president of Venezuela in an address to tens of thousands of people on the streets of the capital, Caracas.

“We are with you,” Turkey’s President Recep Tayyip Erdogan told Maduro in a telephone call, according to his spokesman Ibrahim Kalin. “My brother Maduro. Stay strong, we are by your side.”

Erdogan said the democratic process must be respected.

“As a country that believes in democracy … wherever in the world there is a coup attempt, we stand against them all without distinction. Everyone has to respect the result of the ballot boxes.”

Turkey’s Foreign Minister Mevlut Cavusoglu later told news channel A Haber it was “very strange” that Guaido declared himself president despite the country already having an elected leader in Maduro.

“And some countries recognised him. This situation may lead to a chaos,” Cavusoglu said.

He added Turkey was trying to support Venezuela’s economy as it experiences serious challenges.

Since last year, Turkey has been refining and certifying Venezuelan gold after Maduro switched operations from Switzerland over concerns that further sanctions against his country could see it impounded.

Venezuela recently turned to gold in a bid to shore up its depleted foreign currency reserves as the economy implodes and international sanctions restrict the government’s ability to raise foreign currency.

Russia, meanwhile, warned the US not to intervene militarily in Venezuela, saying its support for Guaido was a “path to lawlessness and bloodshed”.

The Kremlin, commenting on US statements, said on Thursday words about military intervention in Venezuela were extremely dangerous. It added so far there have been no requests for military help from Venezuela.

“We consider attempted usurpation of power in Venezuela as … a breach of the foundations of international law,” said Kremlin spokesman Dmitry Peskov.

“Maduro is the legitimate head of state.”

Nations that did so “show clearly the attitude of the progressive international community towards international law, sovereignty, and non-interference in the internal affairs of a country where it seeks a change in power,” Zakharova said.

Alexei Pushkov, chairman of the information committee at Russia’s Federation Council, called Guaido’s declaration “an attempted coup” backed by the US.

“It’s impossible to imagine that this was spontaneous,” Pushkov said on state-owned Rossiya 24 television station. “That was a preplanned action and it was certainly coordinated by the United States.”

Beijing supports “efforts made by the Venezuelan government for national sovereignty, independence and stability,” she added.

UN chief Antonio Guterres appealed for all sides to engage in talks.

“What we hope is that dialogue can be possible, and that we avoid an escalation that would lead to the kind of conflict that would be a disaster for the people of Venezuela and for the region,” Guterres said at the World Economic Forum in Davos.