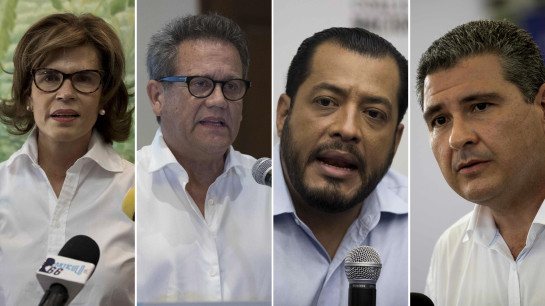 Luis Carrión Cruz, former commander of the Sandinista Revolution and member of Unamos, the new organization that emerged from the dissolution of the Movimiento Renovador Sandinista, a small dissident group led by the Nicaraguan petty bourgeoisie that won only 6. 4% of the votes in the 2006 presidential elections (since than it has no longer participated), is wrong when he claims that the president of Nicaragua, Daniel Ortega Saavedra, intends to negotiate with US President Joe Biden for the liberation of the ”13 hostages abducted by the regime.” Carrión made this comment in an interview published in Confidencial, the digital newspaper of self-exiled Carlos Fernando Chamorro, claiming that Ortega’s motivation for the release of the 13 ”hostages of the regime,” who in reality are transgressors of the Constitution, is the lifting of the US-imposed economic sanctions against Nicaragua in exchange of these criminals.

Carrión deliberately omits the real reason why the National Assembly of Nicaragua approved by majority on December 21, 2020, and put into effect, the Law for the Defense of the People’s Rights to Independence, Sovereignty and Self-Determination for Peace, known as Law 1055, the legal application of which led and will lead to jail those who violate it, as happens in any country in the world.

RELATED CONTENT: What Media Don’t Want To Tell About Arrests in Nicaragua

Law 1055 is the Nicaraguan government’s response to the Nicaragua Investment Conditionality Act, (NICA), enacted by the US in April 2017. Ileana Ross-Lehtinen, representative from Florida in the US Congress, and main promoter of this aggressive and interventionist NICA Act, assured that it would be a powerful tool that will put an end to the ”atrocities occurring in Nicaragua” and reverse the current trajectory of the nation.

This “tool” is being used by Washington to block loans that the Nicaraguan government may request from multilateral financial institutions. This act, designed by the champion of US style democracy, has been translated into economic sanctions, sanctions for violation of human rights according to the US with its imperialist vision (Guantánamo, among other aberrations, don’t count), and acts of corruption, according to the ethical canons of US politicians who are the personification of rottenness. Only two years after the law was put into effect, and with millions of dollars delivered to the new Nicaraguan contra, mainly by the United States Agency for International Development (USAID) and the National Endowment for Democracy (NED), an attempt was made on April 18, 2018, to overthrow the president of the republic who was democratically elected at the polls in 2016.

Today, the self-victimized aspirants for presidential candidatures are jumping into the limelight with six months to go before the elections. Since the agents of the US embassy in Managua could not manage to invest in a candidate of unity of the new contra, those who want to be candidates launched themselves into the mix to try to gain political advantage. But in their haste these politicians without a party became criminals by violating Law 1055, which is very clear: “Nicaraguans who lead or finance a coup d’état… who incite foreign interference… who call for military interventions, who organize themselves with financing from foreign powers to carry out acts of terrorism and destabilization, who promote and execute economic, commercial and financial blockades against the country and its institutions… shall be ‘traitors to the homeland,’ for which reason they shall not be eligible for elected office, without prejudice to the corresponding legal criminal actions established in the Penal Code of the Republic of Nicaragua.”

If all of these ”pre-candidates,” former Sandinista leaders and NGO managers do not agree with said law, there is the National Assembly where they could fight the political battle for its repeal. However, since they have no political strength inside (or outside) the Assembly, these delinquents claim to be victims of “Ortega’s dictatorial regime.”

The elders of these new contras have a very short memory; they do not remember the multiple Yankee invasions, including those of the 1980s. They clamor for the Yankees to return and “remove Ortega,” despite knowing that when the Marines (now Navy Seals) invade, they no longer leave (Iraq, Afghanistan) but stay there to impose a government, army and police in charge of perpetrating the savage capitalism of this era.