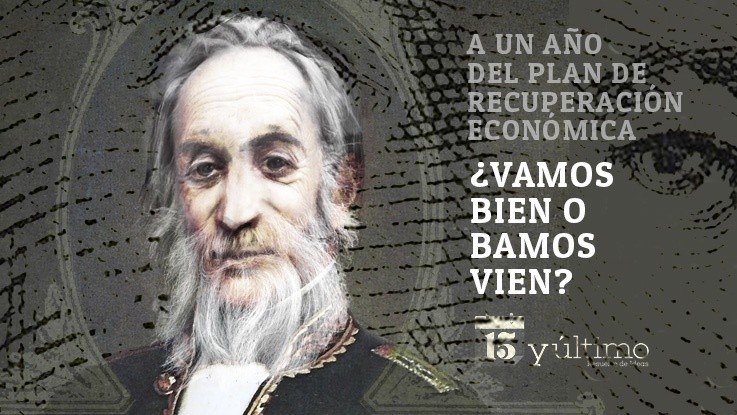 By 15 y Ultimo
Evaluating the performance of the Recovery Plan one year after its launch is not a simple task and several non-minor details should be considered when doing so: Its promoters and defenders immediately name the blockade as the cause things have not gone as they were planned or at least as we all expected them to go. It makes sense, but it is also an easy detour.
Although this variable cannot be ignored – already converted into a constant – the problem is that those who seem to have forgotten it are the designers and executors of the August plan. In this sense, to say that the Recovery Plan did not work because of the blockade, is equivalent to saying that a war strategy X did not work for a country Y because … there is war. Put as it is, the case is that the recovery plan should have foreseen not only the permanence of the blockade but its resurgence. And if it did not do it or by doing so it could not counteract its effects, then it is a plan that did not succeed.
For the rest, it should be remembered that on more than one occasion official government spokesmen said that this could not continue to be used as an excuse , “that economic warfare will always exist as long as the Venezuelan people have the will to be sovereign and independent”, that “we must concentrate on building our destiny”, on “creating conditions for economic stability” that “we cannot choose to “vencer” and die, it is necessary to “vencer”, etc.
For example, in the press conference of the Minister of Communication of August 18, 2018 , it was affirmed regarding the use of El Petro and the anchoring of it to the Sovereign Bolivar, “which meant the death of a parallel dollar and would serve to confront the sanctions and the blockade ”. In fact, the president himself at a meeting of the IV Congress of the PSUV on July 30 of last year , speaking of the plan (not yet revealed), said so:

What all this evidences is that they were not only well aware of the context of the blockade and the economic war, but clearly that the Plan emerged with the purpose of addressing it: it was a formal part of their offer.
But in our view, and this is the second, the blockade is not the only issue to consider when evaluating the performance of the recovery plan. There are also another couple of things, which may be obvious when they are told, but in reality they are not so:
1) Are we still able to acomplish it [recovery]?
2) What plan exactly are we talking about? Do we make ourselves clear?
With regard to the first, the point is that certainly since one year has passed after the announcements, given everything that happened to date and how the picture to come looks, doing a review and accounting arises as a necessity. However, this may be a need for us, the ordinary people, but not the government and those responsible for the plan, because, in honor of the truth, the few times we talked about concrete goals (which includes deadlines and not simple declarations of intention or desires), the results were placed in the short measure for two years and even five, which is why technically speaking we should not expect anything good from it.
In the speech of the IV Congress of the PSUV that we mentioned above, the president can be heard when he says: “I calculate about two years to achieve a high level of stability, that we can see the first symptoms of new, economic prosperity without abandoning protection and social security, in housing, in education, in health, in bonds, in pensions, in the Homes of the Homeland”. And later: “We now have the most advanced comprehensive program that we have ever had, in at least 5 years, for the economic recovery of the country, for the growth of the reproductive forces and through recovery and growth to achieve economic prosperity ”.

RELATED CONTENT: Tales of Resistance: No Growth or Prosperity
Although it is also true that in that same speech the president talked about achieving “early victories” “by hook or by crook” starting on August 20, especially when it comes to prices, there is no doubt that this is an aspect important to take into account when making an evaluation. And it is that in a strict sense, put this way, then it is still very early. We could perhaps claim the lack of early victories. Or to say that they were ephemeral, because if we are going to see the purchasing power (of ordinary Venezuelans) only recovered for a couple of weeks and rather as a result of the conversion (erasing 5 zeroes to the “Bolivar”) and meanwhile all the corresponding price adjustments were made, and when they adjusted all the prices, we lost all the gains.
But the problems surrounding this conclusion are more than obvious: do we Venezuelans have two or five years to wait? And what happens in the meantime? On the other hand, wait two or five years means what:
a) What will we progressively improve until we see results?
b) that we will go one step forward and two backwards?
c) that we must go through a scorching desert, of deficiencies and hardships by then within the proposed term and, almost as in a biblical account, the growth and prosperity will come?
This not asking us an even more relevant question: what would the type of society and economy be resulting at the end of the “Recovery Plan”?
Which brings us to the second point: which plan exactly are we talking about?
Indeed, more than all of the above – the blockade, the waiting time – we believe that the main difficulty in evaluating the Recovery Plan is that everything indicates that we are not talking about exactly one plan but at least two. And depending on which one we choose, we can talk about good or bad results, failure or success, etc.
This is something that we have been commenting on this page since the beginning of the August reforms , to which we made several observations, the constant being that most – if not all – looked trapped in a contradictory logic where not only the media and mechanisms put into practice tended to aggravate the problems raised as objective goals to be solved, but between the goals themselves there were deep contradictions, to the extent that at best they could be achieved separately but not together, and in fact, in more than one case, the failure of one would condition the achievement of another.
Thus, in our view in August, two plans were launched, as we said, a first that we could call “heterodox-progressive”, which dominated the scene contemplating the anchoring of the Sovereign Bolivar to El Petro and from it to the barrel of oil, recovery of purchasing power, agreed prices, etc. And an orthodox monetarist version rather in the background, which posed to combat hyperinflation by reducing the fiscal deficit and cutting monetary emission.
The case is that the first one lasted exactly three months and eight days, because since on the occasion of the famous “correction” of November 28, 2018 this plan was abandoned or relegated to the background to openly move to the Orthodox monetarist version. Already by then the law of illegal exchange had been eliminated . Of which we said that, among other details, it had to be ambiguous enough not to clarify whether the decriminalization of currency exchange meant only the formal exchange market or also involved current commercial transactions. What was visible at that time was the unanchoring of the Sovereign Bolivar from El Petro, as well as the formalization of this in two versions: one as a unit of account on which certain values were anchored but fundamentally the salary. And another as a speculative crypto-asset that would vary as the DICOM increased (in fact, the exchange rate was obtained by dividing the value of the crypto-active petro between 60 and vice versa, without giving any reason for it). There, the hunt by the official exchange rate of the black market dollar (dolar paralelo) began again, which even today does not stop after the definitive exchange rate liberalization that occurred between April and May of 2019.
In this regard, it should be added that an enormous effort of analytical condescension is required to say, as some do, that it was a mistake to leave wages anchored to El Petro as a unit of account, while all the rest was anchored to the dollar DICOM first and banking later. At that level of economic policy there are no such unforced errors: evidently it was a deliberate decision whose purpose was – and is – to compress wages in order to reduce consumption, slow down prices and “ñapa” (additionally), reduce the fiscal deficit, both decreasing in real terms the monetary mass and the public budget and shrinking the payrolls of the State, since the destruction operated on wages brought about that of formal employment and associated labor rights, which also reached the private sector by reducing the labor cost to the minimum.