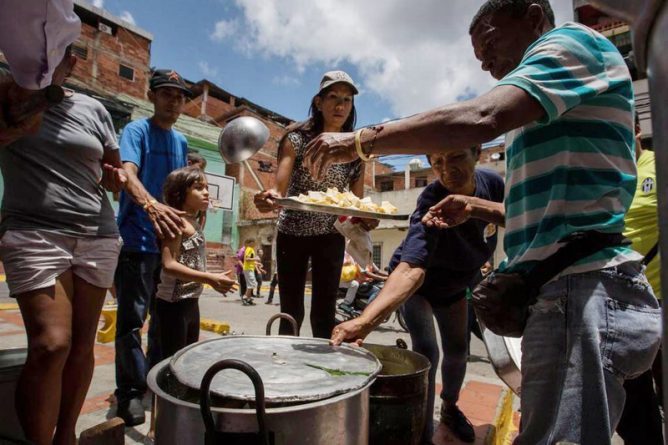 In Caracas, wonderful things happen daily and these things do not stop happening even in difficult moments. In fact, it is when the strength of an organized people that learned to overcome adversities shoulder to shoulder, or at least that’s what the common people do, those who, beyond criticizing, go out to find solutions and transform the realities that afflict them.

Since the Venezuelan people saw the need to communicate, back in 2002 with the attempted coup d’état against Comandante Chávez, popular communicators emerged. This exercise to report the reality of the neighborhoods strengthened the practice that many had been exercising within their communities.

That is the case of Gustavo Borges, a Caracas native who is convinced that the Venezuelan people have been historically strengthened by being in permanent resistance.

He is part of a group or collective that has been dedicated to inform the people from the grassroots, the “gariteo” is the practice of reporting and receiving information within the most vulnerable sectors and have a call: “Report your area, your neighborhood. Gariteo is Activated “.

In practice it is like this: many people got the water on Tuesday night and others did not, but where were those others? In the streets helping to pass the hose for others to fill, raising buckets, in full solidarity with the neighbors.

The “Caraqueño” (inhabitants of Caracas) is very aware and knows that this entire situation they have led us to will continue, but everything that has been happening shows that we can resist and that we are prepared for something stronger that may come.

– Has something positive brought the blackout?
– Beyond any analysis of the situation that can be chaotic, the balance of all this is positive because I see the attitude of my neighbors, the “Caraqueños” on foot (the common people), which had to face this blackout of three, four and five days, the points of (electronic) payment fallen, the Metro closed, all this shows that we still have the same solidarity as always and this is very positive because we had been managing a trend of opinion (in recent years due to the economic warfare) that this nice solidarity had been lost and that we have disassembled it with actions, in practice. We are still the same.

RELATED CONTENT: Venezuelans Working to Recover From the Blackout

Do you imagine all that force that has emerged at this juncture, aimed at transforming everything that afflicts us from the family, the neighborhood, the parish, the municipality, the State? It would be incredible, we have the strength to modify our reality. That gives us power, because our resistance has not been passive, it has been in grassroots action.

That is part of our identity that they have tried to collapse -media wise- in order to dominate us, and that identity was Chávez who gave it life, it was numb but historically we have been a brave and resistant people. It is very difficult to subdue the Venezuelan people.

– In the “barrio’ how is the contingency lived?
-It has even been enriching. The spontaneous political conversation has taken place in the neighborhood because it is already something natural in us and that is very positive.

Something we have to understand is that we are not robots, all this is something that overflows spontaneously, under many tools that Chávez left us because it is so, he incorporated many things in our codes that have helped us to resist.

There is a phrase that says that the Venezuelan people took to the streets on February 27 (1989) and has not returned, and that is true, we continue in that revolutionary action that remains standing.

There is something very important that I want to highlight and that all the experiences that I have received with “el gariteo” (this facebook initiative of reporting through facebook what is happening in the barrios all over Venezuela) have a common point and that is that we were always accompanied by family, friends, neighbors; is that we just would not have resisted. All the stories have a collective in endurance.

I feel very proud of being Venezuelan and I always say: “What an amazing sensation it is to be a Chavista!” – It is a feeling of strength too incredible.

Venezuela is now the center of attention worldwide for the resistance of Venezuelans, especially women, and I do not say it because you are interviewing me, it is real, women are the ones who tirelessly have stood up to the obstacles, my recognition to them.

They will not be able to cope with us under any circumstances. We were born hungry, we were born in darkness, we do not come from comfortable situations. Our condition of life we ​​forge ourselves with the construction of barrios. We are the ones who raise this country and that is not a secret, we have shown it.

With that passion expressed by Gustavo Borges, the feeling of what he experienced, as well as the communicator, knows how to do his work very well, and if they do not believe it, look for his chronicles in the portal of Misión Verdad, a space where he publishes experiences in a funny and intense way. He knows that the people are the only ones capable of saving themselves.

Gustavo Borges Bio: Gustavo Borges is a grassroots communicator from Caracas, he is also a “barrio” activist. His revolutionary practice is based from the grassroots movements. Currently he writes barrio’s chronicles for “Mision Verdad” and on his facebook account he initiated a practice call “GARITEO” in which Venezuelans from allover the country report (in a comment) the situation in their block when special circumstances affects or threaten to affects the Revolution.