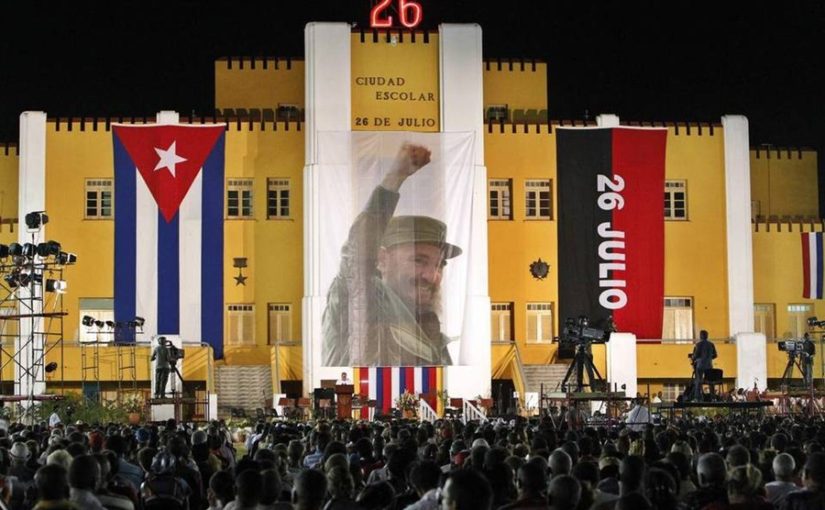 Cuba has a harsh and long history from the days of the Spanish colonisation, the killings of indigenous people, slavery, etc. that finally took a major turn for socialist gains in the mid-20th century.

Cubans fought two wars to become independent from Spain in the 19th century. Those wars were the crucible in which heroes were forged. José Martí was one such hero, killed in battle in 1895, that still symbolises today the courageous revolutionary spirit of Cubans.

When Cubans had practically achieved their goal to defeat Spanish domination with much human sacrifice at the end of the 19th century, the new coloniser from the North replaced Spain in Cuba for more than a half century of occupation and colonisation until the triumph of the Cuban revolution on January 1, 1959. The US created a deceitful false-flag incident in 1898 with the sinking of a US ship in the port of Havana that was used as a pretext to occupy Cuba. Similar types of deception, including hybrid warfare and color revolutions, have become the trademark of US foreign policy to this day, in order to establish their hegemonic ideology and imperialist control in the internal affairs of other countries.

Cubans finally got rid of US imperialism in 1959. However, they still endure the sting that the US left with the continued illegal occupation of part of the province of Guantanamo with a US military base. That territory has served as “storage of people”. The US has maintained at different times thousands of Haitians, Cubans, and more recently Muslims on the base away from the probing eye of their own constitution.

Reading the history of Cuba is like witnessing an account of self-determination, resolution, and passion for freedom and sovereignty. We must keep this in mind if we want to understand what is behind the resolution to resist after more than 60 years of criminal US blockade and the passive complicity of the Canadian government. Patria o Muerte (Homeland or Death) is not just a slogan. It is a collective reminder that there is no “third way”. But Cubans always choose Homeland and defy Death.

RELATED CONTENT: The Defense of the Cuban Revolution is a Struggle Against Fascism

A reaffirmation of that just happened last July 11 when Cubans gave a massive display of popular support for the Cuban Revolution – the trademark of their Homeland – and rejected the violent protests of a small disloyal group of individuals who chose to accept the US call to violence to express disagreement instead of choosing the democratic process.

The armed assault on the Moncada garrison in Santiago de Cuba, led by Fidel Castro, and the simultaneous assault on the Carlos M. de Cespedes garrison in Bayamo, on the 26th of July 1953 (68 years ago), did not succeed militarily. However, it had a tremendous social impact in galvanising oppressed and working class Cubans, which is considered to have contributed to the revolutionary victory of 1959. There lies its importance.

Much can be said about the reasons that lead to the assault and the aftermath of Moncada Day.

This was a genuine rebellion to the abuses of the cruel dictatorship of Fulgencio Batista, who effectuated a US-endorsed military coup on 10 March 1952 knowing that he would not win the planned elections. The objective conditions in the country were such that no other option was left except an armed rebellion under the leadership of Fidel Castro.

In fact, history proved that to be true.

More than 70 rebels were killed, some tortured before being killed. About 26 were imprisoned. Fidel was one of them.

While in prison, Fidel wrote a document addressed to the judges without the possibility of consultation since he was not allowed to use any material. The document became the legal basis of his own self-defense. But more than a self-defence, the document laid out Fidel’s vision of a Cuba following a victorious revolution. The document was smuggled out of prison and later reconstructed as we know it today by the title “La historia me absolverá” (history will absolve me). It was indeed a master plan that was followed to the letter after the triumph of the revolution.

The achievements following the implementation of the revolutionary plan, while at the same time building a new society, are astounding. The goals were achieved based on the solid principles of dignity, respect, self-determination, sovereignty and solidarity that have been a constant in Cuba’s demands to the international community.

Two paragraphs from “La Historia me absolverá” are good examples of Fidel’s vision of a socially just Cuba.

In reference to the different sectors of the economy he wrote:

“The land ownership problem, the problems of industrialisation, housing, unemployment, education and people’s health; there you have the six points to the problems we would resolutely direct our efforts to, together with the conquest of civil liberties and political democracy.”

“It is also declared that the Cuban policy in the Americas would be of close solidarity with the democratic peoples of the continent and that the victims of political persecution from bloody tyrannies that oppress our sister nations would not find persecution, hunger and betrayal, but generous asylum, brotherhood and bread in the homeland of Martí. Cuba is to be a buttress of freedom and not shameful link of despotism.”

Cuba harbours no secrets about its commitment and its expectations: dignity, respect, self-determination, sovereignty and solidarity.

There lies the importance of remembering Moncada Day after 68 years. But we must in addition learn from that memory and be thrusted into action today.

We must proactively use our remembrance of Moncada Day in the context of the July 11 events. The corporate mainstream media, which is by and large embedded with the neoliberal ideology that is forced upon us as the only social model, is the overt branch of imperial propaganda acting for the covert Deep State in the US and its accomplices.

The July 11 events were first triggered as an “innocent” call on social media but were later – predictably – magnified to the extreme of an infowar against Cuba.

Cuban principles of dignity, respect, self-determination, sovereignty and solidarity are universal principles that we must demand from our own governments and their protected media.