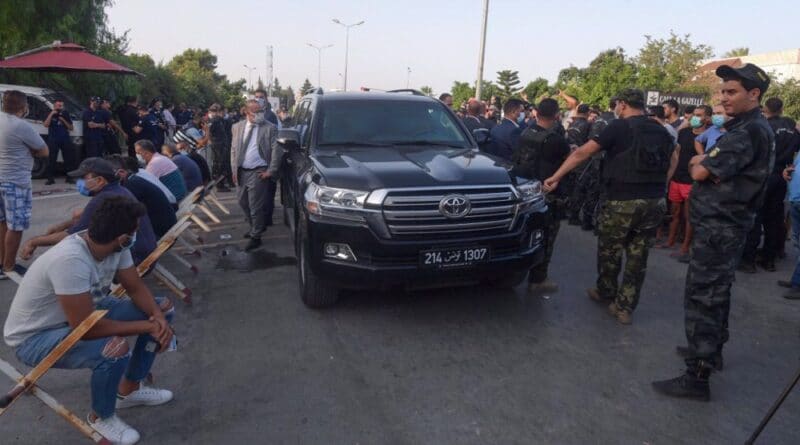 Tunisian President Kais Saied has dismissed the country’s prime minister and suspended parliament following a day of rallies against the ruling Ennahda Party, a move greeted with both celebrations and protests on the streets.

Saied announced on Sunday he would assume executive authority with the assistance of a new prime minister, in what is seen as the biggest challenge yet to the democratic system Tunisia introduced following a 2011 revolution that ousted former Western-backed ruler Zine El Abidine Ben Ali.

In a televised statement announcing the move, Saied warned against any violent response, saying, “I warn any who think of resorting to weapons… and whoever shoots a bullet, the armed forces will respond with bullets.”

The president added that his actions were in line with Article 80 of the constitution, and also cited the article to suspend the immunity of members of parliament.

“Many people were deceived by hypocrisy, treachery and robbery of the rights of the people,” he proclaimed.

The president’s supporters erupted in celebration over the move, but opponents in parliament accused him of staging a coup.

Earlier on Sunday, thousands of Tunisians marched in several cities protesting against the ruling Islamic Ennahda Party, slamming the government’s handling of a surging COVID-19 pandemic on top of the nation’s economic and social woes.

RELATED CONTENT: Kagame’s Push to Fight in Mozambique Runs Into Roadblock—Southern African Development Community Does not Want Rwanda’s Strongman in the Region

After Saied announced the suspension of parliament following an emergency meeting at his palace, the sounds of car horns and fireworks filled the central Habib Bourguiba Avenue — the epicenter of the 2011 revolution. The president also joined the protesters in the street, state television images showed.

However, the extent of backing for Saied’s moves against a fragile government of Prime Minister Hichem Mechichi and the divided parliament was not clear, as Parliament Speaker Rached Ghannouchi also urged Tunisians to come into the streets to block what he described as “a coup against the revolution and constitution.”

“We consider the institutions still standing, and the supporters of the Ennahda and the Tunisian people will defend the revolution,” Ghannouchi said, raising the prospect of confrontations between supporters of Ennahda and Saied.

After calling for people to take to the streets, Ghannouchi vowed that the parliament would meet in defiance of the president’s move.

Meanwhile, military vehicles surrounded the parliament building as people nearby cheered and sang the national anthem.

The parliament speaker led a sit-in protest in front of the legislature after the army blocked him from entering his office. He had tried to gain access to his legislative office from 3:00 am local time, hours after Saied suspended it.

Local media reported that the army had surrounded the state television building as well.

Police also used teargas to disperse protesters that attempted to storm the Ennahda headquarters in Tunis late on Sunday.

RELATED CONTENT: The Syria Deception: The Public Has Been Hoodwinked Yet Again into Supporting a Criminal War of Aggression – and One That Has Been Effectively Lost

Ennahda – which was banned prior to the revolution – is currently the largest party in parliament and has consistently been a member of successive coalition governments since 2011.

Ennahda plans to hold an emergency session to assess the latest political crisis in the country, according to local media.

The leader of another party, Karama, and former president Moncef Marzouki both joined Ennahda in calling Saied’s move a coup.

“I ask the Tunisian people to pay attention to the fact that they imagine this to be the beginning of the solution. It is the beginning of slipping into an even worse situation,” Marzouki declared in a video statement.

Years of paralysis, corruption, declining state services and growing unemployment had already agitated many Tunisians on their political system before the COVID-19 pandemic smashed the economy last year and infection rates surged this summer.

The president and parliament were both elected in separate popular votes in 2019, while Prime Minister Mechichi took office last summer, replacing another short-lived government. The parliamentary election delivered a fragmented chamber in which no party held more than a quarter of the seats.

Saied, an independent without a party behind him, swore to overhaul a complex political system plagued by corruption.

The president has been enmeshed in political disputes with Mechichi for over a year, as the country grapples with an economic crisis, an impending fiscal crunch and a waving response to the pandemic.

Featured image: Members of the Tunisian military prevent Assembly (parliament) speaker and Ennahda party leader Rached Ghannouchi’s motorcade from entering the parliament which they cordoned-off in the capital Tunis on July 26, 2021, following a move by the president to suspend the country’s assembly and dismiss the Prime Minister. (Photo by AFP)