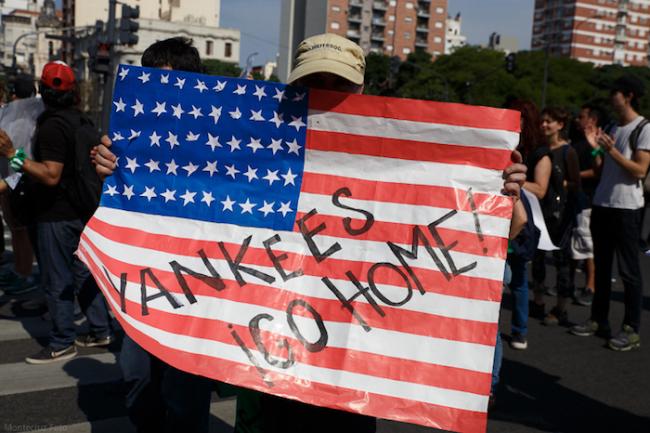 Sanctions and other forms of economic warfare have long caused serious harm for countries on the receiving end of Washington’s efforts to impose its policy agenda. Could a progressive U.S. administration marshal economic power at the service of people, not capital?

Various explanations have emerged. Several of the region’s governments claimed that Venezuelan and Cuban agents were behind many protests. These assertions—which were never confirmed by any sort of evidence—were echoed by Trump administration officials like special envoy for Venezuela Elliott Abrams as well as by Luis Almagro, the secretary general of the Organization of American States, who blamed sinister “Bolivarian breezes” for the regional upheaval.

Cooler-headed observers identified a more plausible culprit: the economy. Every country swept by protests—with the notable exception of Bolivia—was plagued by some combination of economic ills, including entrenched inequality, a downturn in growth, spiraling inflation, increased poverty, and price hikes that negatively affected middle-class and low-income families. Debate, however, continues over what spawned these economic problems; while some point to the fall in commodities prices, others highlight the policy errors of governments.

Largely absent from these debates is any discussion about the potential role the United States has played in regional economic developments. At most, pundits portray the U.S. government as too economically disengaged in the region and criticize it for failing to block China’s alleged hegemonic economic aspirations in Latin America. “With so little opposition from the United States, China’s Belt and Road Initiative will naturally and easily extend to Latin America,” wrote an alarmed analyst in the Diplomat. In reality, U.S. economic statecraft is alive and well in the region, and helped foment the dire conditions that sparked the recent wave of uprisings.

These varied tools of economic statecraft are all, according to official discourse, deployed with the objective of improving the lives of Latin Americans. Yet, they have made life harder for the majority of Latin Americans and contributed to the region’s failure to achieve inclusive growth.

Today as in the past, the U.S. government influences the economic and political trajectories of Latin American and Caribbean countries through sanctions, control of international financial institutions, trade policy, and aid programs. These varied tools of economic statecraft are all, according to official discourse, deployed with the objective of improving the lives of Latin Americans. Yet, they have made life harder for the majority of Latin Americans and contributed to the region’s failure to achieve inclusive growth. As U.S. progressives debate what a progressive foreign policy could look like, they would do well to set their sights on U.S. economic interventionism in the region.

Economic statecraft consists of using economic and financial means to achieve foreign policy goals. It is most frequently associated with sanctions, a tool much of the Washington establishment sees as a legitimate and effective way to pressure “deviant” governments. In recent years, the U.S. government has implemented punishing sanctions against three Latin America and Caribbean countries: Cuba, Venezuela, and Nicaragua. In all three cases, the official purpose of the sanctions is to advance human rights and liberal democracy and to weaken—and ultimately topple—the governments of a so-called Latin American “troika of tyranny,” in former national security advisor John Bolton’s words. However, in all three instances, sanctions have ended up violating the human rights of ordinary citizens while failing—so far—to produce the political change the U.S. administration advocates.

In Cuba, the U.S. government has maintained a near-total trade embargo since 1962. Though it is difficult to assess the economic damages, the United Nations has estimated that the embargo has cost Cuba about $130 billion in lost revenue. Until the late 1980s, the Soviet Union helped Cuba survive by purchasing much of the island’s sugar exports at higher-than-market rates. The Soviet collapse set off declining national production and consistently low growth rates, leaving Cuba with a dire economic situation. The embargo has also negatively affected Cuba’s healthcare system by blocking imports of life-saving drugs and medical equipment patented in the United States.

The economic sanctions targeting Venezuela, though much more recent, have arguably had a more dramatic impact, in part because the country was already in the midst of a major economic crisis. Venezuelan economist Francisco Rodríguez has demonstrated that a first set of financial sanctions in 2017 contributed to a sharp reduction in oil production—the country’s main source of revenue—which led to an estimated income loss of nearly $15 billion and prevented the economy from recovering. Subsequent measures, which include January 2019 sanctions on oil exports to the United States, have provoked an additional loss in income of at least $7.5 billion, according to Rodríguez.

These sanctions have had an enormous human cost. An April 2019 study by economists Mark Weisbrot and Jeffrey Sachs estimates that the reduced access to essential imports of food and medicine— caused by the sharp decrease in foreign currency inflows resulting from financial and economic sanctions—has resulted in at least 40,000 deaths. The number has no doubt significantly increased since.

In Nicaragua, U.S. sanctions introduced in late 2018 mostly received attention for targeting the assets of individuals allegedly involved in human rights violations or acts of corruption; their real bite, however, lies in provisions that instruct U.S. Treasury officials to block loans to Nicaragua from the World Bank, Inter-American Development Bank (IDB), International Monetary Fund (IMF), and other international financial institutions. For Nicaragua, these sanctions came at the worst time. Following a nationwide protest movement and subsequent violent clashes beginning in April 2018, the economy contracted by 3.8 percent. Though the country has recently stabilized, in part due to state-led repression, experts expect the economy to shrink an additional 5 percent in 2019. This crippling downturn is directly linked to a sharp decline in foreign investment fueled by U.S. sanctions.

Aside from human suffering, particularly among the most vulnerable low-income communities in these three countries, what have any of these sanctions achieved? Certainly not the sort of political change the U.S. government advocates. Cuba has experienced the longest trade embargo in modern history, but its Communist Party remains firmly in control. In Venezuela, sanctions were intended to spur the removal of President Nicolás Maduro, but his hold on power appears stronger than ever. Meanwhile, in Nicaragua, there’s no sign that President Daniel Ortega is going anywhere. Why, then, do sanctions continue to be an important part of the U.S. foreign policy arsenal?