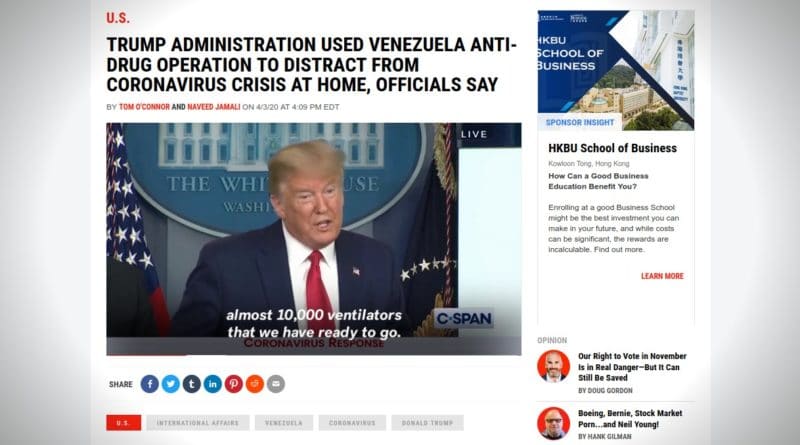 A piece published by Newsweek magazine, signed by Tom O’Connor and Naveed Jamali, highlights that the Trump administration now intends to show that the sending of military ships to the Caribbean Sea, to combat alleged drug shipments from Venezuela, is a measure to mitigate the spread of coronavirus. According to the US government, criminal organizations would seek to take advantage of the pandemic for their illegal activity, which also contributes to the spread of the virus. However, Newsweek’s investigation reveals that the “anti-drug” mission was developed in late 2019 – when the coronavirus was not yet known – and its real purpose was to pressure President Nicolás Maduro to resign.

Senior US officials revealed to Newsweek that the announcement this Friday is an attempt to “deflect criticism of the administration’s mishandling of the outbreak at home (US).”

For his part, a senior Pentagon official said Trump’s plans date back to December 2019 and talks between military personnel began in January 2020. Documents leaked to the magazine show that in February the design of the operation began under orders from the chief of the Joint Chiefs of Staff, Mark Milley; likewise, the course of action began to be evaluated by the commander of the Southern Command, Craig S. Faller.

“This was not supposed to go public until May,” the senior Pentagon official told Newsweek , adding that Trump “is using the operation to try to divert public opinion.”

Last Wednesday, Trump announced the operation, alleging that they are called to prevent “drug cartels from exploiting the pandemic to threaten the lives of Americans,” but this Friday an official claimed that the real reason -now- is to prevent the spread of the disease.

This operation was announced a week after the Justice Department charged President Nicolás Maduro and part of the Venezuelan State on alleged drug trafficking charges without presenting a single solid piece of evidence.

Later, the State Department launched a plan called “Democratic Transition Framework for Venezuela” with the aim of creating a consensus government, subject to US guidelines.

Internal criticism
In the North American country, voices have been pronounced against the announcement, calling it inappropriate, for trying to use federal resources when the country fights against the effects of the coronavirus on the American people which is quickly taking on catastrophic magnitudes.

Kassandra Frederique, managing director of policy and campaign advocacy at the Drug Policy Alliance, called the plan “an effort to distract Americans from the belated response to the COVID-19 crisis, which we now know probably would cost hundreds of thousands of lives.”

For her part, former Deputy Assistant Secretary of Defense Evelyn Farkas told Newsweek that “it was difficult to see these latest deployments of military force as more than an attempt to change the conversation about Trump’s mismanagement of the coronavirus pandemic.”