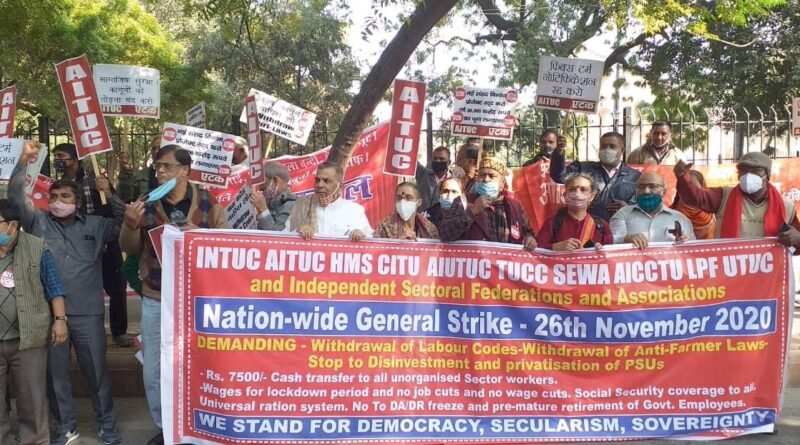 26 November, 2020 Despite repression, a joint general strike by workers and farmers has shut down India. Over 250 million workers took part in the 26 November strike.

All over the country, both public and private sector employees participated in the strike. The united front of the over 250 farmers organizations, All India Kisan Sangharsh Co-ordination Committee (AIKSCC), extended support to the trade union strike and the unions extended their support to the farmers’ “Chalo Delhi” (Go to Delhi) mobilization on 26 and 27 November. Farmers are protesting against recent anti-farmer laws which would withdraw the government’s minimum support price for farm products, with serious implications for farmers’ income and livelihoods.

Trade union leaders expressed concerns that, using Covid-19 as an excuse, the government has unleashed widescale repression. Police used violent means to attempt to stop hundreds of thousands of workers and farmers who are on their way to Delhi to demonstrate peacefully in the capital city on 26 and 27 November.

“Despite the severe police actions across the country, workers enthusiastically participated in the strike. The recent labour law changes, including the new codes on social security, wages and industrial relations, should be revoked as they fall short of protecting fundamental principles and rights at work.

“On many aspects they go against India’s commitments in the international human rights and labour rights forums. Mishandling of Covid-19 and anti-people economic policies pushed millions into misery. This strike and the joint action with farmers will send a strong message to government demanding workers’ and people-oriented policies.”

“We condemn the violent means used to stop the democratic expression of dissent. IndustriALL stands in solidarity with the Indian trade union movement and commends their effort in forming a broad-based alliance with famers and agricultural workers against anti-people policies.

“Indian trade unions demands are genuine, especially in today’s situation with high unemployment and job losses, which have been exacerbated by the pandemic ravaging the world, and in particular India. The government should listen to the trade unions and hold genuine dialogue to resolve issues.”

The IndustriALL executive committee, which met online on Thursday 19 November, expressed its full support and solidary with general strike.