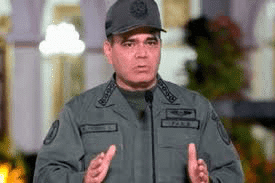 The Minister for Defense, Vladimir Padrino López, reported on Sunday that all electrical installations will be under the control and surveillance of the Bolivarian National Armed Forces, the announcement was made this afternoon in a statement broadcasted by VTV from the Miraflores Palace. He also stated that there is a logistical operation currently running that monitors all major electric transmisión lines.

He said that “all the logistical capacity and risk management agencies are at the people’s orders.” As an “act of full cowardice” described the attack on the National Electric System and made reference to the indignation of the Bolivarian National Armed Forces ( FANB) at such actions against the citizens of the country.

72 hours after the attack, he described it as a massive violation of the human rights of Venezuelans, because it not only affected the economy, industry and peace of the country, but the people’s access to their fundamental rights.

Also, he affirmed there were no major security issues to report but that those who, taking advantage of the energetic problem, try to engage in actions of violence, will be punished with all the weight of the law.

He assured that the entire Citizen Security System and the FANB are also active with the patrol at full force, “with the will and the indignation that we have inside, we are going to win”.

Padrino López also recognized the civility of the population that in a situation of enormous distress keep the calm and order in the country.