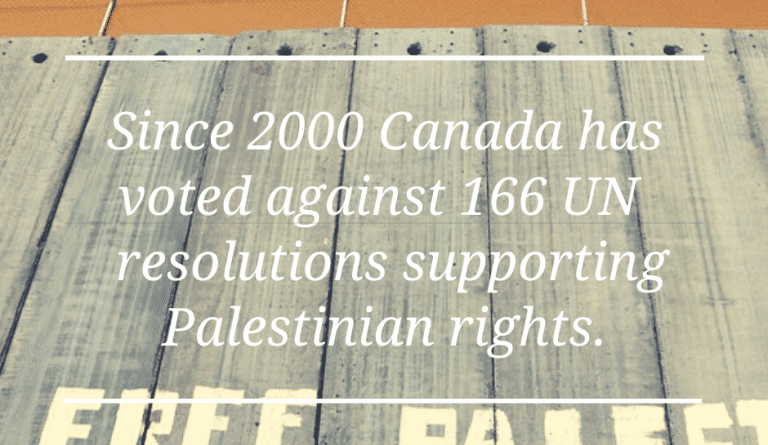 The Palestinian solidarity movement is unsettling Canada’s diplomatic apparatus. In the final week of their multi-year campaign for a seat on the United Nations Security Council they’ve been forced to respond to a strong, well-documented, campaign in defence of Palestinian rights.

Yesterday, Canada’s Permanent Representative to the UN, Marc-André Blanchard, delivered a letter to all UN ambassadors defending Canadian policy on Palestinian rights. Blanchard was responding to an Open Letter organized by Just Peace Advocates signed by more than 100 organizations and dozens of prominent individuals. Over the past week more than 1000 individuals have used that letter as a template to contact all 193 UN ambassador to ask them to vote for Ireland and Norway instead of Canada for two seats available on the Security Council.

Canada’s ambassador claims the Just Peace Advocates’ letter contains “significant inaccuracies”, but he doesn’t identify a single one of those “inaccuracies” (Blanchard probably hoped his letter wouldn’t be put online).

Here is the Palestinian solidarity letter sent to all UN ambassadors:

“As humanity reels from the Covid-19 pandemic, you will soon select the world’s representatives on the UN’s highest decision-making body. As organizations and individuals advocating in Canada and elsewhere for a just peace in Palestine/Israel, we respectfully ask you to reject Canada’s bid for a seat on the UN Security Council.

As you choose seats on the Security Council between the bids of Canada, Ireland and Norway for the two Western Europe and Other States, the UN’s historic contribution to Palestinian dispossession and responsibility to protect their rights must be front of mind. In these uncertain times, Palestinians are particularly vulnerable to Covid-19 due to Israel’s military occupation and violations of UN resolutions.

The Canadian government for at least a decade and a half has consistently isolated itself against world opinion on Palestinian rights at the UN. Since coming to power – after the dubious record of the Harper government – the Trudeau government has voted against more than fifty UN resolutions upholding Palestinian rights that were backed by the overwhelming majority of member states. Continuing this pattern, Canada “sided with Israel by voting No” on most UN votes on the Question of Palestine in December. Three of these were Canada’s votes on Palestinian Refugees, on UNRWA and on illegal settlements, each distinguishing Canada as in direct opposition to the “Yes” votes of Ireland and Norway.

The Canadian government has refused to abide by 2016 UN Security Council Resolution 2334, calling on member states to ‘distinguish, in their relevant dealings, between the territory of the State of Israel and the territories occupied in 1967.’ On the contrary, Ottawa extends economic and trade assistance to Israel’s illegal settlement enterprise.”

Canada has repeatedly sided with Israel. Ottawa justified Israel’s killing of “Great March of Return” protesters in Gaza and has sought to deter the International Criminal Court from investigating Israeli war crimes. In fact, Canada’s foreign affairs minister announced that should it win a seat on the UNSC, it would act as an “asset for Israel” on the Council.

When deciding who represents the international community on the UN’s highest decision-making body, we urge you to consider the UN-established rights of the long-suffering Palestinians, and to vote for Ireland and Norway, which have better records on the matter than Canada.”

In reality, the letter only touches on the current government’s anti-Palestinian record. They’ve also celebrated Canadians who fight in the Israeli military, threatened to cut off funding to the International Criminal Court for investigating Israeli crimes, protected Israeli settlement wine producers, added Palestinian organizations to Canada’s terrorism list, adopted a definition of antisemitism explicitly designed to marginalize those who criticize Palestinian dispossession and repeatedly slandered the pro-Palestinian movement. None of this is secret. In fact, Liberal MP and former chair of the government’s Justice and Human Rights Committee, Anthony Housefather, has repeatedly boasted that the Trudeau government’s voting record at the UN was more anti-Palestinian than the Stephen Harper government!

The Trudeau government has almost entirely acquiesced to Housefather, B’nai B’rith, Centre for Israel and Jewish Affairs and the rest of the Israel lobby’s positions. But, they understand that there is sympathy for Palestinians within the UN General Assembly. And they need those individuals to vote for Canada’s Security Council bid if they don’t want to suffer an embarrassing defeat.

To be forced to respond at this late hour in their Security Council campaign represents a setback to the Liberals. But, we won’t know how significant the damage is until after next week’ vote. In the meantime please send a letter to all UN ambassadors calling on them to vote for Canada’s competitors, Norway and Ireland, for the two non-permanent Security Council spots open for Western countries.

As Just Peace Advocates’ Karen Rodman has pointed out, “the letter is seeking to pull at the heartstrings of the individuals who cast the secret ballots for the Security Council seat. We want to remind UN ambassadors that Canada has consistently isolated itself against world opinion when it comes to the long-suffering Palestinians.”