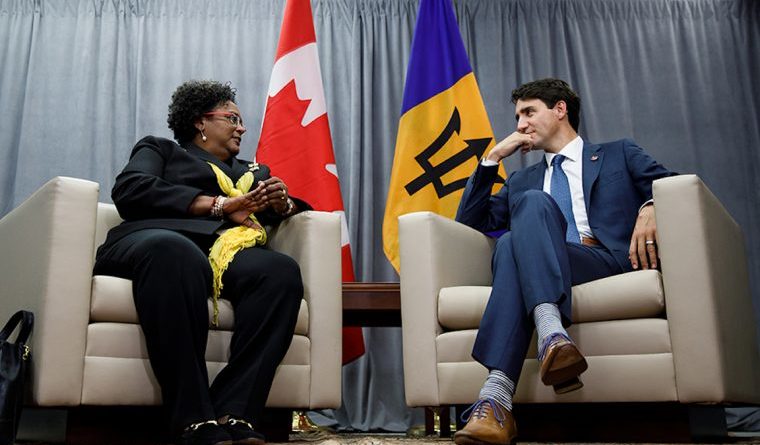 There are three contenders in the upcoming election for a seat on the UN Security Council. Unlike the other two, Norway and Ireland, present-day Canada represents the epitome of modern colonialism. Although the US is the quintessential post-World War II colonial power, Canada is not far behind. Canada is one of the most important foreign affairs allies of the US. Unlike Norway and Ireland, Canada is a G7 country and thus part of the group considered to be the de facto coordinating committee for international affairs. In reality, it is also the group coordinating colonial domination over the world.

Canada is a latecomer to the G7, having been admitted to this exclusive club only in 1976. However, successive Canadian governments since WWII, irrespective of the political party in power, have consistently “earned” Canada’s place in the “colonial sun.” This is largely due to its unconditional commitment to the US-led subjugation of the Third World. Had this not been the case, a country such as China might have been invited to the G7 instead. Of course, irrespective of one’s views on this country, China does not toe the US line.

Zeroing in on Latin America and the Caribbean, let us start with Haiti. This country had the first successful slave rebellion in the world. It established an independent black republic by throwing the French colonial regime out of the country. But in more recent history, Canada has been a key player in a coup d’état against Haitian president Jean-Bertrand Aristide. Since that 2004 event, Canada has been one of the leaders of a so-called Core group, along with the US and France, which continues to support the violent subjugation of Haiti to Western interests.

Yet, Canada is fully involved with the US in attempting to overthrow the Venezuelan government. Along with the US and Colombia, the Justin Trudeau government is at the head of this effort through the so-called Lima group. The Donald Trump administration is not in the Lima group, because Trudeau is doing their dirty work for them. Trudeau is the liberal poster-boy acting as a diplomatic front for Trump, while Colombian president Iván Duque represents the armed wing of the Lima group.

The Trudeau government also played a key role in the US-led coup against Evo Morales in Bolivia by immediately recognizing the unelected Jeanine Áñez as interim president. Canada also backed the now disputed electoral investigation by the Organization of American States (OAS) whose evident bias helped unleash a wave of racist massacres and oppression against Indigenous Bolivians.

Trudeau further supported the right-wing coup against Lula in Brazil by the racist Bolsonaro. He did not seem bothered by the catastrophic economic conditions and violent repression caused by the policies of the right-wing government of Mauricio Macri in Argentina. Trudeau went out of his way to show solidarity with president Sebastián Piñera of Chile while the military and police were violently suppressing huge demonstrations by students and Indigenous Chileans, recalling the Pinochet era.

As the finishing touches were being carried out to this article we just learned about another atrocity in Chile. The widow of the Chilean Mapuche leader Alejandro Treuquil, who was assassinated on June 4, confirmed that death threats were carried out against her husband in the period leading up to his assassination by the Carabineros, the Chilean military police seemingly supported by Trump and Trudeau.

Turning to a life and death issue for small island nations affected by climate change, where does Canada stand? While many small Caribbean islands risk devastation to coastal communities from rising sea levels, it is pertinent that both Ireland and Norway have per capita emissions that are little more than half of Canada’s. CARICOM States could attract a far more sympathetic ear to the two countries making a greater effort to contain climate change.

On nuclear arms, Caribbean countries signed a treaty making “Our America” (Latin America and the Caribbean) a peace zone free of nuclear arms, while Canada has refused to sign a UN treaty against the proliferation of nuclear arms (but signed by both Ireland and Norway, along with more than 150 other states). In the realm of development assistance to the Third World, Norway spends about one percent of its GNP, with less wealthy Ireland contributing 0.32 percent, while wealthy Canada spends a lowly 0.26 percent.

Canada may be geographically closer to CARICOM countries than Norway and Ireland. However, Ireland is also an island and has had its anti-colonial struggle against British colonialism. When Trudeau speaks to Caribbean countries on any subject, his mindset is 100 percent US-oriented or, completely imbued with a Eurocentric outlook, values and preconceived notions.

Whenever Latin American/Caribbean regional summits take place that include CARICOM States, I watch Caribbean leaders speak with clarity, passion and sincerity in support of Caribbean values and sovereignty against all attempts at foreign intervention in the region.

Tiny Islands with Voices of Giants need to look squarely at the issue of the elections for seats on the UN Security Council. Surely, after considering Canada’s role in the region and the world, it is impossible to fathom how it could be in the interests of CARICOM States to vote for a government such as the current one in Canada.

Trudeau’s foreign policy serves as camouflage for Trump’s policies, and the Monroe Doctrine which is still very much on the table today.

Malcom X famously said: “The white conservatives aren’t friends of the Negro, but they at least don’t try to hide it. They are like wolves; they show their teeth in a snarl that keeps the Negro always aware of where he stands with them. But the white liberals are foxes, who also show their teeth to the Negro but pretend that they are smiling”.