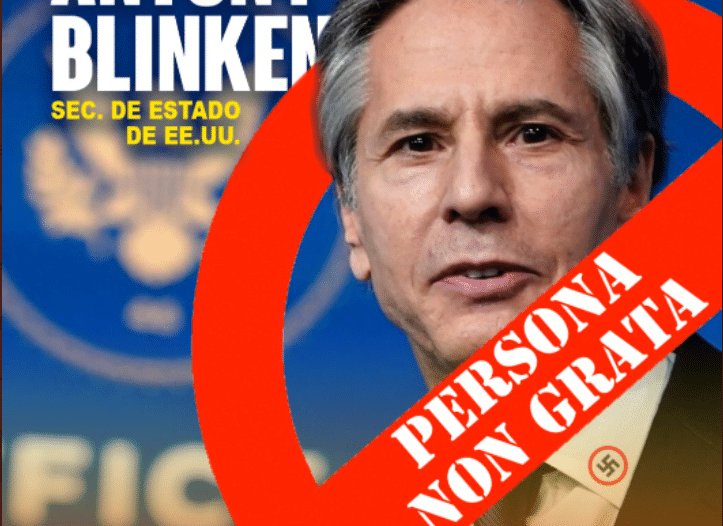 Featured image: Viral image on Instagram and Twitter with the face of US Secretary of State, Antony Blinken, behind a red sign that says 'persona non grata.' Photo: Twitter/@SipuFRENADESO.

Social movements in Panama have expressed their repudiation of the upcoming visit of US Secretary of State, Antony Blinken.

After the US State Department confirmed Blinken’s visit to Panama during April 19 and 20 to attend a regional meeting on migration, the National Front for the Defense of Economic and Social Rights (FRENADESO) declared the head of the State Department “persona non grata.”

Blinken will participate in the Ministerial Conference on Migration and Protection, which is expected to be attended by foreign ministers and defense ministers of a number of Latin American and Caribbean nations to discuss actions that “guarantee safe, orderly and humane migration” in the continent, something very far from the anti-migration, racist and xenophobic policies exercised by the majority of the countries in the region.

Experts question Washington’s discourse around this issue and allege that it has double standards, because certain nations, such as Cuba, do not have access to options for this type of emigration, with Cubans being encouraged to use irregular routes to reach the US due to the non-existent US consular operation in Cuba.

Other analysts in Panama have pointed out that the Washington delegation’s visit to Panama takes place a few weeks before the United States lifts border restrictions with Mexico, by repealing a rule that allows migrants to be expelled immediately, known as Title 42.

This decision, they believe, could increase the already high migrant flows in the first quarter of this year relative to the same period in 2021, according to records of the National Migration Service (SNM) of Panama.

SNM reports specify that from January to March, 13,425 people (17% of them minors) traveled through the dangerous Darien jungle, bordering Colombia, on their way to the United States, while in 2021, in the same period, 5,622 were reported.

Blinken’s agenda includes a tour of the Panama Canal and talks with representatives of multilateral development banks, international financial institutions and NGOs to assess economic recovery of Panama.

Mouynes reported on April 3 that Blinken would travel to Panama to participate in the meeting on migration issues. She added that Blinken also plans to assess the Trade Promotion Treaty between the two countries, which entered into force in October 2012, a few years after the gigantic defeat of the US Free Trade Agreement of the Americas (FTAA). FTAA was defeated in Mar de Plata Argentina in 2005 by Hugo Chávez, then president of Venezuela; Nestor Kirchner, former president of Argentina, and Luis Ignacio Lula Da Silva, former president of Brazil.

The government of Panama has expressed to the Joe Biden administration its interest in addressing the revision of the tariff reduction rate, after protests from national producers who assert that this norm threatens their jobs and income.

In the last seven days, in the middle of the Holy Week, a protest over the rise in fuel prices and the strike of truck drivers in the West Panama Province revealed popular discontent over the mismanagement of the economy by the Panamanian government.

After days of striking, the truck drivers went to the offices of the Land Transit and Transportation Authority (ATTT) summoned by the governor of that province, Sindy Smith, to negotiate at a dialogue roundtable, but their demands were not heard.

The protesters held Carlos Ordoñez, head of the ATTT, responsible for the new measures of pressure on the workers. They added that Ordoñez continues to ignore the demand of reducing fuel prices and of reviewing the current public transport ticket rates agreed 11 years ago.

Featured image: Viral image on Instagram and Twitter with the face of US Secretary of State, Antony Blinken, behind a red sign that says ‘persona non grata.’ Photo: Twitter/@SipuFRENADESO.