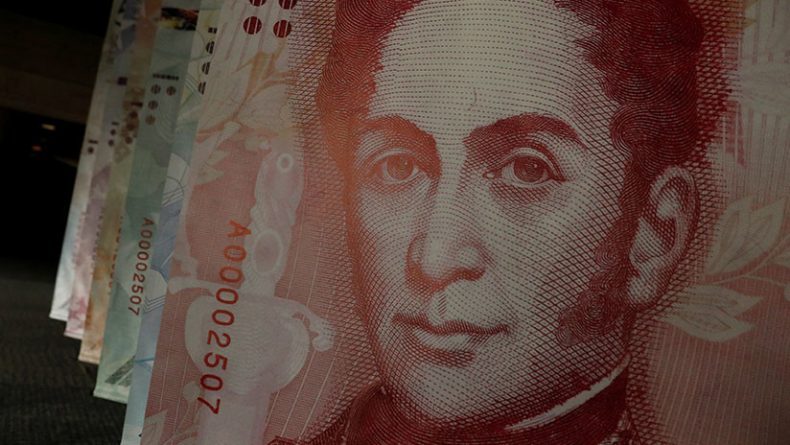 Editorial note: Although this RT analysis is quite good, it fails to mention the effect of the Dicom exchange rate in the use of international form of payments, like credit cards of debit cards from abroad. With the official exchange rate on a very similar level as the parallel market an important number of economic actors are using more and more their electronic forms of payment (in US dollars) to make purchases in Venezuela and that provides the BCV with an unusual access to dollars and contributes to the pressure reduction  on the parallel market price.

March ended and the illegal marking of the North American currency did not exceeded the 4,000 sovereign bolivars. Specialists offer some clues in this regard.

At the end of the first quarter in Venezuela, the so-called parallel dollar has made a ceasefire to the hyperinflation process that the South American country is experiencing. Although it already exceeded the official rate barrier (3,300 bolivars), the illicit price of the currency has not distanced too much with respect to the value set by the Central Bank of Venezuela (BCV), as has happened before.

The biggest upturn occurred at the beginning of the year, in the midst of the inauguration for a second constitutional term of President Nicolás Maduro, on January 10. Exactly, in the first 15 days of that month, the American currency skyrocketed from 780 to 3,100 bolivars , an increase of 300% according to calculations by the economist Pascualina Curcio, reviewed in an article in the portal 15 y Ultimo.

However, March ended and the rise in the price of the parallel did not exceeded the 4,000 bolivars for dollar. ¿ Why that happened ? Economists consulted by RT offer some reasons.

Dicom
For the economist and former Minister of Foreign Trade, Jesús Farías, the implementation of the new dollar rate in the Foreign Exchange Auction System (Dicom), which started at 3,200 bolivars per dollar, has “defined” the market price of currency in Venezuela.

The new official exchange rate, when it was launched on January 29, exceeded for the first time the illegal price of the dollar in the parallel market.

In fact, in the first three months of its implementation, parallel marking has moved between 3,000 and 3,700 bolivars per dollar on average, and has sometimes been equated to the amount of the official exchange rate itself.

“As the gap between the Dicom and the parallel market is not so wide, many choose not to buy and sell as many currencies as before, because there is a band of prices that are not so far apart,” says the professor of economics from the Central University of Venezuela (UCV), Andrés Santeliz.

Legal reserve
Economists believe that the legal reserve policy applied to the banking system may be one of the reasons.

The measure obliges the banks to freeze part of the deposits in the Venezuelan Central Bank  (BCV), as a reserve, with which the excess liquidity (bolivars) is limited and affects the slight “stabilization” of the illegal parallel price.

How does this phenomenon happen? Santeliz explains that the legal reserve limits banks’ provision of credits, an “escape valve” used by companies to buy foreign currency at a parallel market .

Since the last four months of 2018, the BCV has increased the legal reserve requirement, which generated the rejection of the chambers of commerce and industry (Fedecamaras and Conindustria, respectively), which allege ” stifling reduction ” of bank loans for “production “, and extraordinary payments for “replenishment of inventories”.

The legal reserve of the marginal balance of the banking system increased from 40% to 50% in November 2018.

Farías appreciates this policy applied by the BCV is right, considering that the reduction of loans in bolivars has reduced the possibility of being used as “fuel” for the acceleration of the parallel price of dollars.

For its part, Santeliz argues that the reserve policy of the BCV was applied too late, but argues that with its implementation there is an attempt “to intervene and put some brakes on exchange speculation.”

Tax payment
For some years, the season to pay taxes in Venezuela has been key for the cost of the parallel to “slow down” in the first quarter of the year.

The reason, economists say, is that companies use high amounts of bolivars to pay taxes and “inhibit” buying “large volumes of dollars,” until they meet the Income Tax (ISLR), which payment deadline in Venezuela closes on March 31.

However, the Integrated Customs and Tax Administration Service (Seniat) extended until April 30 the period to declare the ISRL. The reason for the extension was the blackouts that, according to those consulted, impacted on the “stabilization” of illegal marking, since the electronic operations necessary for the purchase and sale were interrupted for hours and days .

Santeliz adds that, in addition to the ISLR, it is necessary to include the payment in bolivars of the Value Added Tax (VAT). As he explains, since the stores register high sales in December, in the first quarter they do not ” move ” so many currencies because they need bolivars to meet the tax commitments that have to be paid in bolivars.

This behavior “slows” the demand for dollars and impacts their value in the parallel market. The trend has become so common that at the end of each year companies are assured, says Santeliz, of acquiring enough foreign currency to “support” the first months of the following year.

“When the expiration of the first quarter of the year is nearby, they go out to look for bolivars to comply with the tax,” says the university professor.

The challenge
Economists agree that, after April, the Government’s challenge will be to prevent the gap between the official rate and the parallel rate from expanding as in previous years. In the South American country it is usual the emergence of new and multiple illegal markers that establish the value of the currency, without obeying economic laws or rational parameters.

In this context, Santeliz assures that the perception of “collapse” of the Venezuelan economy promoted by some sectors opposed to the Government of President Maduro, may point to an upward trend in the cost of the currency.

“It may jump,” predicts Santeliz, but says that the possibility of distancing in a linear way “will be complicated,” because in his opinion that will depend on the number of bolivars available to meet the demand , which, with the application of legal reserve, will be “restricted”.

However, the economist Oscar Forero considers that this scenario does not depend on the availability of the local currency, since he maintains that the country is currently experiencing a “de-bolivarization”.

“The dollar will continue to rise because there is a progressive depreciation of the bolivar, and the population is increasingly demanding more currency , even for retail,” he argued.

Forero fears that what happened in the first quarter will suffer a ‘rebound effect ‘. That is to say, after this period in which the dollar in the parallel market remained stable and even went down, it will expand again.

“Unfortunately, in recent years this has been the sustained behavior of the parallel in Venezuela,” he said.