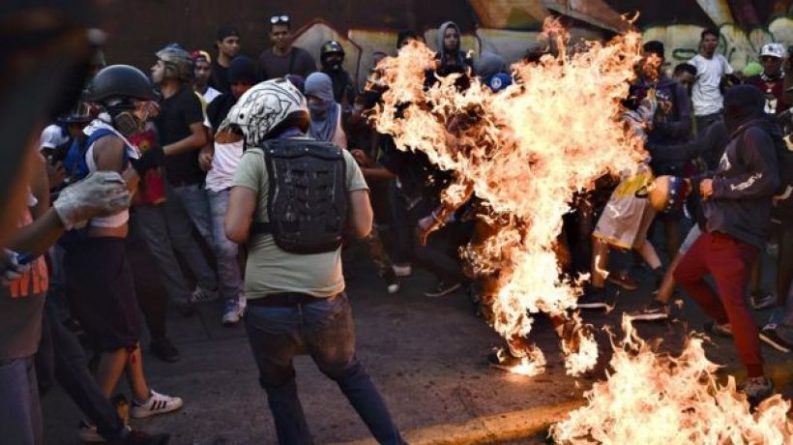 Since the activation in January of the coup assisted by the United States, new denunciations have been emerging about incitements to lynchings against the Venezuelan population identified with Chavismo.

This was stated by the Attorney General of the Republic, Tarek William Saab, at a press conference when he received a commission composed of victims of hate crimes and constitutionalists of the National Constituent Assembly (ANC).

Saab received in his office the first vice president of the ANC, Tania Diaz, and a commission of relatives of victims of hate who exhorted the Public Ministry (MP) to enforce the Law Against Hate, for Peaceful Coexistence and Tolerance in November 2017.

The attorney general said he has seen with concern the progressive escalation of these crimes after the Anti-Hate Law was passed, in response to the persecutions, assaults and murders that occurred during the revolution of colors promoted by Washington and the local anti-Chavismo of April to July of that same year (2017).

CURRENT CASES OF POLITICAL VIOLENCE AND ACTIONS OF THE ATTORNEY GENERAL’S OFFICE
The journalist of the Radio del Sur, Vanessa Gutiérrez, denounced the physical injuries suffered by her father on March 14, 2019 due to an attack she received from her neighbors for publicly showing her sympathy with Chavez.

The assailant of Luis Manuel Gutiérrez Moreno, who was initially released by a court, is being prosecuted for crimes of hate, as announced by Saab.

Another similar case attended by the MP was that of arson in the residence of the mayor of the municipality of San Judas Tadeo in Táchira state, Betzabeth Gandica.

The incident occurred on the night of March 9 (2019) and was reported by the protector of Táchira, Freddy Bernal. A group of violent protesters who after taking the Plaza Bolivar in the area moved to the residence of Gandica, beat her mother and proceeded to set her house on fire, endangering her life and that of seven children. Those involved in this act of public intimidation were later arrested by the Corps of Scientific, Criminal and Criminal Investigation (CICPC).

In addition to these direct violations, the MP is investigating in coordination with the Bolivarian Intelligence Service (Sebin) the instigation of hatred that has been unleashed on social networks.

For its part, Tania Diaz advanced evidence of violent behavior of individuals with thousands of followers on the social network Twitter, who currently use their profiles to instigate other Venezuelans to commit hate crimes, as they did in 2017, year in which It produced the creation of irregular groups that committed lynchings in the public light against dozens of people.

Another case to be highlighted is that of journalist Madeleine García, a reporter for the Telesur network, who denounced threats against her life made by users of the social network Twitter, who revealed private information, such as the address of her residence, among other details.

The attacks on Garcia intensified after her coverage of the events that occurred on the Simón Bolívar bridge on the Venezuelan-Colombian border in late February, when the opposition, which was being promoted from abroad, used the already famous pretext of “humanitarian aid” to enter with irregular groups to the country and install an agenda of chaos sufficiently denounced by the Venezuelan government.

Madalein García was responsible for capturing the first images of dismantling against the operation of false flag that tried to install on the border bridge violent opposition groups, who ended up burning the cargo trucks with supposed humanitarian aid, a fact that was later confirmed by the New York Times.

In the same way on March 15 from the state of Yaracuy, the same journalist denounced other situations that could be classified as hate crimes, where Chavismo militants were subjected to extremist messages. There opposition factors besieged the homes of local political leaders, recording images that pretended to create fear among them and their families.

IMMEDIATE BACKGROUND: THE RECOURSE OF HATE TO BURN CHAVISTAS
Just a few months separate the Venezuelans from the hundred victims who left the operation of a soft coup of 2017.

At least 30 people were killed by violent groups that received the approval of the opposition leadership and fanatical followers. The degree of aberration in the acts committed included the burning of people, the lynching and the stoning of incinerated corpses.

Precisely, this radicalization crossed the line with the murder of Orlando Figuera, stabbed, burned and beaten by members of  (right-wing) “La Resistencia” in the city of Caracas, after being identified with Chavismo solely because of his skin color. His death was followed by the testimony of 20 other burned people who survived the attacks of these death squads.

Another murder that tried to be hidden by the national and international media was that of Héctor Anuel, a Venezuelan motorcyclist, who, at the time of his lynching, was trying to cross an opposition barricade located in the city of Lecherías (Anzoátegui state). As with Orlando Figuera, the opposition groups burned alive Anuel and recorded the subsequent stoning of his remains to spread on the networks as a warning.

Other cases of political assassinations, such as the lynching of the Bolivarian National Guard, Danny Subero, (killed in Lara state when he went through the burial of a victim of street violence) and the death of the nurse, Almelina Carrillo, (impacted by a bottle of frozen water thrown from a building in Caracas) were those that gave impetus to the creation of the Law Against Hate, typifying this type of aggression as crimes incited by political intolerance.

Tarek William Saab, alluded to these crimes, noting that in some cases, investigations have been carried out identifying those responsible for leading the violent mobs to be prosecuted. He reported that one of those who acted in the murder of Figuera is fugitive in Colombia.

Twenty-two months after the most violent period in contemporary Venezuelan history, the legal instrument for coexistence and tolerance is activated to eradicate a new escalation.

THE EXTREMIST VIOLENCE IN THE FRAMEWORK OF THE COUP PLOT IN PROGRESS
The growing threats of death by hate that are now being denounced, are framed in the events triggered during the coup led by the White House as of January 23 of this year.

The false figures of deaths because the lack of electrical power in hospitals due to electrical sabotage, are added to the economic circumstances that Venezuelan society is going through, product of the blockade led by the US Department of the Treasury, where the consequences are redirected to the Venezuelan government.

These effects, for the opposition, represent an incentive to extremist acts of sabotage and disturbance of public order that directly affect the physical integrity of Chavismo or those who disassociate from violence.

It is not the first time that opposition leaders legitimize extremist positions, nor is it coincidence that they re-emerge at a time when war propaganda is constant and resonant in US foreign policy.

We must remember that the National Assembly in contempt fabricated a supposed amnesty law that promises impunity to anyone who submits to the plan of destabilization in the country, redressing the faults of crimes not yet committed.

That is why it makes sense that the reactivation of hate propaganda coincides with the creation of paramilitary cells recruited and trained abroad to enter and commit selective assassinations inside Veenzuela.

These operations stimulate, in their narrative, the followers of the Venezuelan opposition, especially via social networks and the Internet, which seek to normalize in the rest of the population a feeling of hatred against Chavismo.

RECYCLING OF COLLECTIVES AS FEAR PROPAGANDA
On April 1, John Bolton addressed the Minister of Defense, Vladimir Padrino López, to accuse the collectives of firing and suppressing the protests of the opposition sector.

General @vladimirpadrino: Illegal armed groups (‘colectivos’) were sent out by Maduro and Cabello to shoot at and repress the Venezuelan people. Why does FANB allow this? pic.twitter.com/aGQKFDH2XU

Just the weekend prior to the mention of the groups by Bolton, violent opposition groups tried to impede the water supply by trucks in the capital city, which due to the continuous blackouts has presented difficulties to reactivate the regular water supply. The Bolivarian National Guard coordinated with community leaders in each sector, were responsible for mapping routes to supply the population and, as a whole, protect these sabotage initiatives.

Bolton’s tweet mobilized the transnational media discourse, as on previous occasions, to take it to a deformed concept of the political movements of Chavismo that operate in the country, who work together with organized communities in search of solving the problems arising from the attack to the national electricity system, especially the distribution of drinking water in urban areas.

The impulse helped the National Assembly, in contempt, to bring the term “state terrorism” to these actions and that of “paramilitaries” to the organized Chavismo forces, legitimizing the international demonization of the collectives.

This also corresponds to the preparations of the “Operation Freedom”, announced for April 6 and where the central aspect is “the mobilization of the whole country to exert the necessary pressure so that the usurpation ceases”.

Featured image: Orlando Figuera, “for being black and chavista”, was killed by violent anti-Chavez on May 20, 2017 (Photo: AFP)