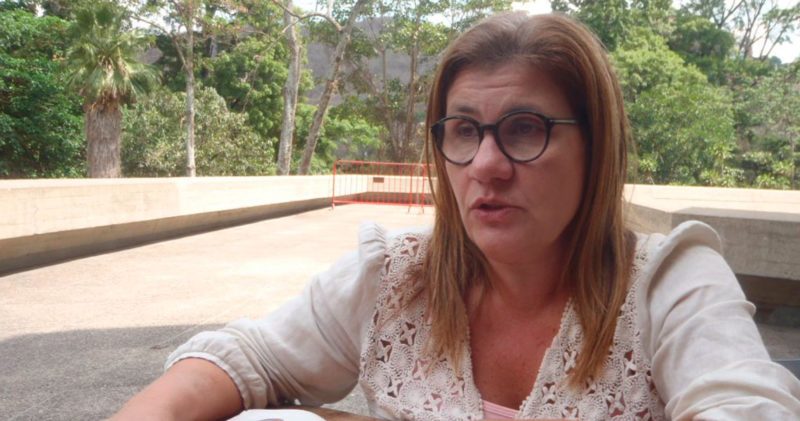 Each time the imperial economic attack intensifies against Venezuela, many glances are directed, by way of consultation, towards the economist Pascualina Curcio, one of the best analysts of the situation in the Caribbean country. Pascualina has been providing propositive guidelines on how to confront opponents who want to destroy Bolivarian Venezuela by attacking the currency, causing shortages and monitoring, as is happening today, through a criminal blockade.

We spoke with Pascualina Curcio a few days ago in Mexico, where she was a part of the Venezuelan delegation to the International Seminar of the PT of that country.

What is your opinion regarding the development of the brutal economic war that the empire is waging against Venezuela?

In the first place, we must not ignore that there exists a complex situation in Venezuela economically, even politically, because of the offensive that is taking place, the important thing is to identify the causes that are behind this situation. We know that since 1999, when Chávez’s mandate began, Venezuela became an unusual and extraordinary threat, not because we have the newest weapons in the world, but because we confront imperialism and resolve to be independent and sovereign. Since that moment we have been attacked and the attack intensified since 2013. I reiterate, our dignity in standing up to the empire is the fundamental cause, not the only factor, but this is what is determining the situation in which Venezuelans are living. This situation of shortages of certain foods and medicines originates in processes seeking to alter the distribution of these goods, distribute them to informal markets, and sell them at an inflated price.

The inflation has also affected the Venezuelan population, particularly the salaried working class, at a time when their incomes are deteriorating. Our enemies point out that this is due to a supposedly failed socialist model, which is false. Inflation is being generated, induced, through criminal manipulation of the exchange rate, they have manipulated the 3.5 billion percent exchange rate since 2013 until the present. That is not to say that nothing has happened in the country from the economic point of view, but by no means in such proportion as to explain why our bolivar has depreciated in figures of this magnitude. It is altogether a political manipulation that alters prices of imported goods and production costs and generates hyperinflation.

RELATED CONTENT: Bloomberg Publishes an Article by Guaido Imploring the Chinese for Support

Moreover, the unilateral coercive measures imposed by the United States, and also other countries, are not only against the government, the economy in disguise, but against the Venezuelan people.

Even against those who oppose Maduro’s government…

Against all, and hyperinflation also affects the entire population. If we want to view it from the class perspective, it has reached a point where, in particular, small producers of non-essential goods are complaining about the entire situation because it involves a significant price increase.

Also $1.2 billion in gold was blocked in the Bank of England, $1.6 billion in Euroclick. Then there is, for instance, the cost of keeping vessels carrying food and medicine at sea longer than expected to prevent them from entering a Venezuelan port. This involves freight costs, cost of products lost, the cost of the dollar migrating when the SWIFT exchange system blocks our currency, the cost of debt or Republic bonds lost. All this adds up to 21,000 million dollars and added to it is that we estimated the economic setback caused by the attack on the currency. When they attack the currency they not only generate hyperinflation, but also reduce production. If the currency had not been attacked in recent years we would have produced oil at an average price, even with 22 dollars a barrel, an additional 51 billion dollars. And they have also been working inside the oil company not just with prices, but also with production through internal sabotage.

Everything, coercive measures, the attack on the currency, losses due to oil exports total 114,000 million dollars. For the sake of reference, Venezuela’s gross domestic product for last year is around $130 billion. It is equivalent to an entire year’s production basically, but also means that with $4 billion, or a little more, we import medicines and food for the entire population for one year. If one divides the 114 billion by the 4 billion, it would generate an import of medicines and food for 26 years. This shows the impact of that economic loss in terms of goods and population access.

Such is the situation, and the important thing is to find out which is the determining cause, without ignoring the fact that there are faults, errors, which one expects to see because in the transition to a socialist model there are no manuals, especially if you are being attacked and besieged, as has happened to all the countries that have decided to move towards that model.

From this point of view, at this very moment, what would be the urgent proposals that would have to be made to confront this war?

On the issue of commercial transactions with other countries concerning the financial blockade and the trade embargo, there have been, not only proposals, but important advances: the strengthening of alliances with China and Russia, not just any country, and also with India in the area of medicines, Iran and Turkey. This is strengthening trade relations for supply in the current situation, especially in the area of food and medicines, which is the most urgent issue, but also agreements for domestic production. With regard to the financial blockade, in order to circumvent it we have migrated to transactions with the yuan and even bilateral agreements which are barter, but which enable us to sell oil and receive other products.

Internally, on the issue of hyperinflation and the attack on the currency, there is a proposal that we have been presenting that has two aspects. One is to increase international reserves in order to strengthen the currency. Our income is mainly from oil, but we also have a way to increase international reserves, which few countries have, from gold, because Venezuela is now the second largest gold reserve country. Not coincidentally, this siege is part of this, and to buy gold, which is held in reserve, you do not have to pay dollars or euros because you have gold in reserve. This strengthens the currency and, at the very least, reduces the risk of attacks on the currency.

The other is to back the bolivar in gold. That is, for a specified amount of bolivars being backed by gold that is in the Central Bank measured in terms of amounts. If there are 100 bolivars circulating and there are 100 ounces of gold, each bolivar is equivalent to one ounce, in monetary terms, depending on the price of gold that the international markets set. Venezuela can do that, because, among other reasons, it has enough gold to support it; just 5% of what is in the vault supports all the bolivars that are circulating. In addition, this is part of what appears to be the new international monetary system that is advancing apparently with a gold backing. China created the petroyuan based on gold, Russia has been buying a lot of gold, it is also a producer, with the prospect of backing the ruble in gold, the BRICS countries are moving towards a currency backed in gold, South Africa is one of the largest gold producers. And so, it is within that framework, within a new system with gold that counterbalances the paper petrodollar.

Can the government put this in place in the short term?

The conditions are in place. The most important thing is to have gold, which benefits us.

What would be the obstacle for it not to be effective?

I don’t know if there will be any obstacles, I believe we will go there at some point, especially with the new monetary order.

I say this in function of the fact that we all know what the daily life of Venezuelans is at this moment, the heroism of that people is indisputable. But it is also clear that empire, internal opposition in Venezuela are gambling on attrition, with the latest electrical attacks they are gambling on an uprising, which is not happening. But neither should we expect everyone to endure life like this.

There is no doubt that quick answers must be given. But this is like a chess board, the government moves a piece and they also have a response. For example, when the CLAP were created the production levels of the companies were always maintained, but when the government told them that since they were altering the distribution of food they were going to buy it and they had to give them 50% of their production, they knocked down production. But there is no doubt that at this juncture urgent responses must be given.

The resistance of the Venezuelan people is something that imperialism does not understand, which is why they are desperate, after six years they have applied all available methods to overthrow democratic governments, now they are in the last chapters of every manual. There are a number of elements, in addition to the patriotic consciousness, there is the civic-military union, which imperialism does not comprehend, a legacy of Comandante Chávez. There are many factors that do not appear to be included in the manuals, but there is no doubt they are trying to exhaust us and we must ensure that the situation is stabilized.