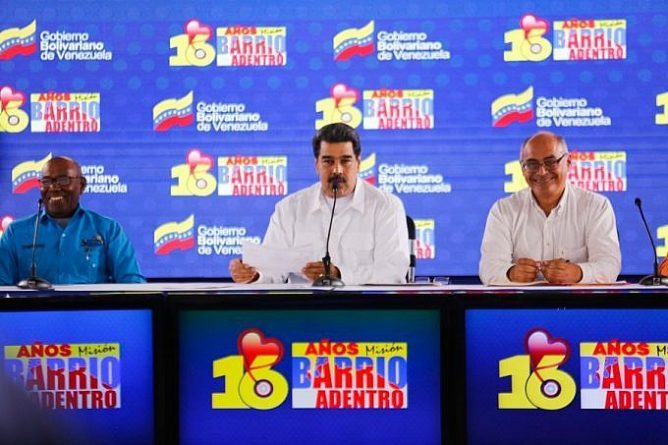 The Venezuelan president affirmed that he will accept all the aid that enters the country in coordination with his government, when greeting the first batch of humanitarian technical assistance that arrived in the country on Tuesday, with the assistance of the International Red Cross. “Legally, through the port of La Guaira, through the Maiquetia airport, in coordination with the constitutional and legitimate government of Venezuela which I preside over, all the humanitarian aid that wants to come in is welcome,” President Maduro said in a celebration of  16 years of the Barrio Adentro Mission.

On Tuesday, the first shipment of humanitarian technical assistance brought by the International Red Cross and the Federation of Red Cross and Red Crescent Societies arrived in Venezuela. Among the supplies, medical material to serve 10,000 people and 14 small generators that will be installed in hospitals to deal with electrical outages.

He recalled that his country has already received humanitarian aid and has firm, solid and complementary agreements with countries such as China, Russia, India, Belarus, Iran and Cuba, among others, “in a timely, legal, organized way, complying with international protocols” which allows the arrival of medicines every week. “All this help arrives in an organized manner, complying with international protocols, prior security, review of materials, medicines and medical-surgical equipment.”

President Maduro recalled that he met with Francisco Rocca, president of the International Federation of Red Cross and Red Crescent Societies, and then with Peter Maurer, president of the International Committee of the Red Cross, and both came to agreements. “By mutual agreement, yes. By agreement, everything. By what is legal, constitutional, everything.  By force, nothing. Never again!”

He welcomed the help brought this Tuesday and pointed out that the delivery should be done without politicization and without manipulations.

16 years of the Barrio Adentro Mission

In his speech the president explained that a total of 1,975,618 consultations have been made by the Barrio Adentro Mission since its start in 2003.

“The Barrio Adentro Mission is the largest humanitarian operation that has been known in Latin America and the Caribbean, bringing preventive and family medicine every day for 16 years,” said the head of state from the Military Circle in Caracas.

The national leader celebrated on Tuesday the 16th anniversary of the creation of Barrio Adentro Mission, founded on April 16, 2003, by the commander Hugo Rafael Chavez Frias in cooperation with the government of Cuba, at that time, in the charge of the leader Fidel Castro, to provide preventive and free medical care to Venezuelans.

Barrio Adentro Mission will be in charge of strengthening and expanding the Humanized Birth Plan, announced President Maduro. “The Humanized Birth Plan is one of the most beautiful things the Revolution has created. That is why I give them to you, to give you love and to train all women,” he emphasized.

The President said that the 20,000 doctors who work daily in the Barrio Adentro Mission will attend the entire gestation process of the more than 500,000 pregnant women currently registered in this social program. “We must attend to all women in their pregnancy so that they feel happy and not feel that it is a suffering but one of the great happinesses that a human being can have,” said Maduro.