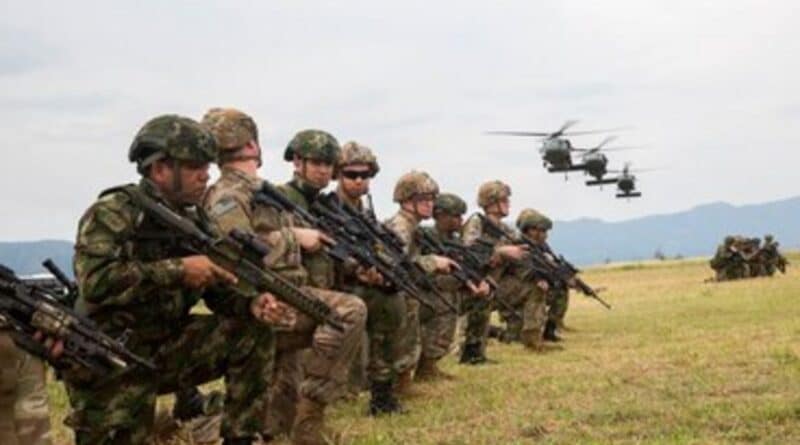 A presentation by the chief of the US military’s Southern Command (SOUTHCOM) and a report drafted by the US Army War College’s chief expert on Latin America have been issued back-to-back in the last two weeks, both making dire warnings of growing Chinese influence in the region. Together, they amount to a brief submitted to an incoming Biden administration, arguing that Washington must escalate its drive to assert imperialist hegemony over the lands to its south as part of its preparations for a global confrontation with China.

The head of SOUTHCOM, Admiral Craig Faller, told Pentagon reporters Wednesday that US imperialism’s “competitive edge [in the region]…is eroding, particularly when it comes to the Chinese influence.”

Faller presented this challenge largely as a matter of China’s failure to “play by global rules,” by which he means the rules imposed over the course of the 20th century underpinning US global hegemony.

“They’ve come in with the same type of infrastructure deals, loans, that they have used globally to gain influence,” he said. “[T]hey come in with deals that no one can compete with because US industry has to compete fairly by law.”

Who does he think he is kidding? US corporations have used criminal methods to dictate terms to Latin American countries—and helped overthrow governments that failed to accept them—since the beginning of the last century, from the United Fruit Company in Guatemala in 1954, to ITT and Anaconda Copper in Chile in 1973, to the role of Big Oil and US finance capital today in the drive for regime change in Venezuela.

Faller acknowledged that, while four years ago only one government in the region had signed on to the Belt and Road Initiative—Beijing’s huge global infrastructure program aimed at linking China’s markets to Eurasia and beyond by land and sea—now, 19 have.

China has become Latin America’s foremost lender and investor and is poised to overtake the US as its chief trading partner. It is already the number-one partner of Brazil, Chile, Peru and Uruguay, and is the second largest for many other countries

Total trade between China and the region has increased from $17 billion in 2002 to almost $315 billion in 2019. In the midst of the COVID-19 pandemic, the recovery of China’s economy has led to a continuation of this growth, even as trade with the US, Europe and Japan has fallen off sharply.

In addition to insinuating that the growth of China’s economic influence in Latin America could be chalked up to fraud, bribery and extortion, Admiral Faller insisted that Beijing’s primary interest was in developing “seaport infrastructure” and “deep water ports,” noting that China had “signed 40 commercial port deals in SOUTHCOM’s area of operations.” These deals, he charged, were primarily of military significance.

“What does it look like if China has a strategic control of the Strait of Magellan, or the Panama Canal, the approaches to the Gulf of Mexico through a Caribbean port? What does that look like in a global conflict?” Faller asked. “The Panama Canal is a significant global choke point. We were concerned as we watched China working port deals on either side of the canal.”

“Certainly in a global Chinese fight, that would be one of the key considerations: how do we defend that canal?” Faller said.

What hypocrisy! US “human rights training” did nothing to stop the Colombian military—granted $448 million in US aid this year alone—from murdering tens of thousands in its so-called “false positive” campaign of deliberately targeting civilians and then claiming that they were armed insurgents. Over the past half century, similar crimes and worse have been carried out across Latin America with the direct aid of the Pentagon.

“We’ve even found them teaching a course on why the US is not a partner of choice for the military taught by the PLA to partner nation militaries here in the hemisphere,” Faller added. “That I find alarming and shocking.” Shocking! As if the Army’s School of the Americas did not offer decades of courses in anti-communism, reinforcing and legitimizing the fascist ideology of Latin American military officers who led CIA-backed coups and murderous dictatorships.

An even more chilling expression of the way in which the Pentagon perceives Chinese influence in Latin America was provided by the US Army War College’s expert on the Western Hemisphere, Evan Ellis, in a paper published two weeks after the November 3 presidential election by the Center for Strategic and International Studies (CSIS), a Washington-based think tank with close ties to the US military and intelligence apparatus.

Ellis placed the question squarely within the context of the Pentagon’s preparations for a new world war between the US and China, both nuclear-armed powers.

“In the context of large-scale hostilities with the United States…PRC military relationships in the region would likely be used in all stages of the global-scope campaign necessary to wage that conflict,” Ellis writes.

He continues: “In the event of a prolonged fight in Asia, the PRC could persuade or intimidate one or more actors in Latin America to permit the PLA to use its ports, air fields, or other facilities in support of operations against the United States. Although difficult to imagine today, such permission could be less unthinkable in a future scenario in which the continuing growth, quality improvement, and operational experience of the PLA causes some Latin American and Caribbean governments to question the ability of the United States to prevail or to sustain a costly conflict. … If some Latin American governments decided to ‘bet against the United States’ and permit the PRC to use their facilities for military purposes, the accumulated PLA knowledge of Latin American military leaders, forces, organization, infrastructure, and operating environment would increase the speed and effectiveness with which it could establish a wartime presence to conduct operations against the United States.”

Underlying this grim perspective is the protracted attempt by US imperialism to offset the erosion of its global hegemony by means of escalating militarism. This drive will only continue under an administration led by Biden and the Democrats, who campaigned against Trump on the basis that he has been too “soft” on Russia and China.

The Pentagon sees Latin America as a battlefield in a coming World War III and is preparing accordingly. It is seeking to shore up its ties to the region’s armed forces, including, as in the 1960s and 1970s, through the promotion of military coups and dictatorships to confront the rising revolutionary challenge from the working class.