Pedro Castillo supporters protesting near the Peruvian Congress and calling it a rat nest. Photo: AFP.

This Wednesday, December 7, the president of Peru, Pedro Castillo, was arrested, after having dissolving the congress to call elections in order to develop a new Constitution. The Peruvian Congress, which had been dissolved hours before, responded by approving a motion of vacancy to dismiss President Castillo for reasons of “moral incapacity.”

According to the decision of the Peruvian congress, the vice president, Dina Boluarte, will be in charge of the executive. Boluarte was sworn in as president later in the day. Boluarte accused Castillo the same afternoon of “perpetrating the breakdown of the constitutional order” and executing a “coup d’état,” failing to mention that the Peruvian Constitution provides for such a measure in its Constitutional Article 134.

The President of the Republic has the power to dissolve Congress if it has censured or denied its confidence to two Cabinets. The dissolution decree shall contain a call for the election of a new Congress. Such elections shall be held within four months of the dissolution of Congress, without any alteration of the existing electoral system.

The third motion of vacancy against Castillo was scheduled to be debated this Wednesday, but the Peruvian head of state surprised legislators by announcing the dissolution of Congress and the establishment of an emergency government. “In response to the citizen claim, throughout the country,” Castillo said, in a televised address to the nation, “we made the decision to establish an emergency government aimed at restoring the rule of law and democracy.”

The announcement hastened the vote in Congress on the resolution without a debate. The vacancy motion reached 101 votes in favor, when 87 were needed. In past votes, the opposition did not achieve the votes needed, but Castillo’s decision to dissolve the Congress apparently changed the perspective of its members.

The head of the Board of Directors of Congress, José Williams, referred to Castillo’s measure as a “coup d’état” a few hours after his possible dismissal occurred. Many local and international media outlets took the same stance, as did some of Castillo’s ministers who were closer to the right of the political spectrum.

Detention
Subsequently, Pedro Castillo was arrested and taken to the headquarters of the Lima Prefecture. Peru’s attorney general, Daniel Soria Luján, filed a criminal complaint with the national prosecutor against Castillo “for the alleged commission of the crimes of sedition, abuse of authority and serious disturbance of public tranquility.” 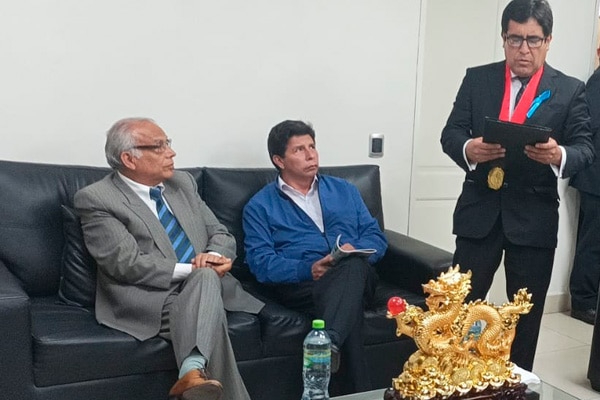 Vice President Dina Boluarte was sworn in as president in a session of Congress scheduled for 3 p.m. (local time). It is the first time in the history of Peru that a woman is in command of the Executive Power. Boluarte was expelled last January from the ruling party, Perú Libre, for indiscipline. Perú Libre holds 32 of Peru’s 120 Congress seats, the largest share of any party.

Castillo’s measure
Before the parliamentary debate that planned to remove him, Castillo surprised everyone this Wednesday, issuing a message to the nation in which he announced the dissolution of Congress and the formation of a “provisional government.” He said that a new constitution would be drafted within nine months, and he issued a curfew from 10 p.m. to 4 a.m. (local time).

According to the president, the measure was to include:

The president explained that, as of that date, and until the new Congress of the Republic is established, it will be governed by “decree laws.”

This was the third time that Congress sought to remove the president. The first motion was dismissed in December 2021, while the second was rejected last March.

In his message, Castillo accused the majority of congresspersons of being identified with “racist and elitist interests in general,” and of “disastrous obstructionist work.” He added that they “have managed to create chaos in order to control the government, bypassing the popular will and constitutional order.”

“We have been in a continuous and stubborn campaign of attacks against the presidential institution for more than 16 months, a situation never seen before in Peruvian history,” he said, stating that the “only agenda of Congress” since July 29, 2021, “has been and is the presidential vacancy, the suspension, the constitutional accusation or the resignation at any price.”

Call to “support” the decision
Castillo called on all civil society institutions, associations, peasant rounds, defense fronts and all social sectors to “support these decisions,” which, in his opinion, would have allowed the country to “direct” “toward its development, without any discrimination.” The president commented that in this “interregnum,” “the economic model [would] be scrupulously respected, based on a social market economy, which is based on the principle that states ‘as much market as possible and as much State as necessary.'”

“Private property, private initiative, freedom of enterprise with active participation of the state in protection of workers’ rights, and the prohibition of monopolies, oligopolies, and any dominant market position,” he said, “are to be respected and guaranteed, preserving the environment and protection of vulnerable Peruvians.”

The president further stated that the Organization of American States (OAS) would be informed of the decision taken.

Ministers resign
After the president offered his message, seven ministers out of 19 submitted their resignations:

Reactions
Francisco Morales, president of the Constitutional Court, said, “nobody owes obedience to a usurper government, and Mr. Pedro Castillo has carried out an ineffective coup.” The National Prosecutor, Patricia Benavides, rejected the president’s measure, which she described as a “breach of the constitutional order.” Opposition congressmen rejected it as a “coup.” One such opposition congressman, José Cueto from Renovación Popular, summoned the Armed Forces to “defend democracy.”

In some local outlets, analysts have noted that current events in Peru point towards recent loss of confidence in only one minister last November, Aníbal Torres. The constitutional article does not provide the time scope for such an analysis. More ministers from Castillo’s cabinet have been subjected to such decisions by Congress over the last 18 months.

Even before Pedro Castillo’s inauguration, the Peruvian oligarchy—that control not only the Congress, but local media, the judiciary and the military—decided not to grant him a minute of rest to allow him to govern the South American country. Pedro Castillo has Indigenous roots and hails from humble origins in Peru’s impoverished Cajamarca department. As such, he represents all the values that the racist Lima elite despise.