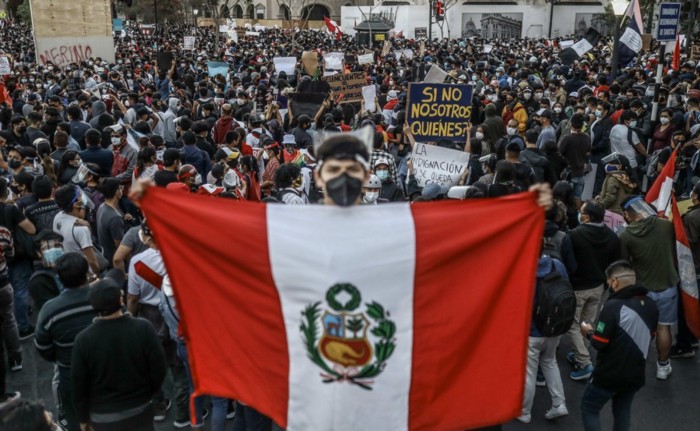 Peru was rocked by protests following the dismissal of President Martin Vizcarra on November 9. Vizcarra was the fifth in a succession of Peruvian presidents accused of complicity in scandals related to Brazilian construction conglomerate Odebrecht. A massive display of discontent faced his successor, Manuel Merino, who swiftly resigned. On November 17 centrist Francisco Sagasti was appointed as president. This week protests continue, characterized by anger at Peru’s neoliberal policies and clear demands for a new Constitution.

The Birth of Neoliberal Peru

In Peru, the implementation of neoliberalism by force, and its triggering of violent uprisings, bears striking similarities to Chile’s recent history. The neoliberal model was implemented in Peru by President Alberto Fujimori, who gained office in 1990 following the presidency of Alan Garcia of the American Popular Revolutionary Alliance (APRA). Garcia’s moves to nationalize banking and his strong anti-imperialist stance had made him an immediate target of international finance. As in Chile under Allende, or in Venezuela today, hyperinflation resulted. Peru was unable to weather the crisis.

Less than two years after taking office, Fujimori exploded the democratic process, closing the doors of Congress, suspending the Constitution, and purging much of the judiciary through a process called a “self-coup” in April 1992. Like Pinochet, Fujimori massacred communists and leftists, attacked Peru’s Indigenous population, and committed a spate of human rights violations, for which he was arrested years later.

Fujimori ordered the Barrios Altos massacre of November 1991, in which at least fifteen people were murdered by a paramilitary death squad of the Peruvian Armed Forces. The attack was intended to strike Peru’s Marxist-Leninist Sendero Luminoso (Shining Path) organization. The self-coup effectively prevented investigation of the crimes. In May 1992 forty-one prisoners, alleged Shining Path members, were murdered by Peruvian police in jail. Fujimori was also convicted of authoring a massacre at La Cantuta University in which a university professor and nine students were tortured and killed in July 1992. Three thousand Peruvians were killed in political murders during his first term of office.

Meanwhile, the U.S. presidency of George H.W. Bush quickly recognized Fujimori’s unconstitutional coup government, while U.S. media extolled Fujimori for re-integrating Peru into the world economy. With language echoing their praise of Pinochet, for example, Washington Post wrote in 1995 that “by any objective measurement, Fujimori has wrought miracles in Peru.”

Fujimori’s implementation of neoliberal policies mirrored those of Pinochet. “He implemented a radical programme of free-market reforms, removing subsidies, privatizing state-owned companies and reducing the role of the state in almost all spheres of the economy,” wrote BBC more recently. “Though this shock therapy brought great hardship for ordinary Peruvians, it ended rampant hyperinflation and paved the way for sustained economic growth in the second half of the 1990s.”

“More than any other Latin American leader, Fujimori had subscribed to neoliberalism in chapter and verse,” confirm Poole and Rénique.

This year’s protests sounded the familiar call for constitutional reform. In Peru, like in Chile, the Constitution was disfigured in order to allow neoliberal policies to enrich transnationals and the Peruvian oligarchy. Peru’s current Constitution was promulgated in 1993, at the height of the Fujimori dictatorship. Fujimori “assembled a handpicked constituent assembly to rewrite the Constitution,” Poole and Rénique detailed.

“It is clear that we have nothing, we have no healthcare, we have no jobs, we have no pensions, we have absolutely nothing,” explained Peruvian activist José Carlos Llerena. “The people link it to a neoliberal regime that has the 1993 Constitution as its basis, which was carved out in an authoritarian manner.”

Significantly, Vizcarra had taken steps to reform Peru’s Constitution. “Upon ascending to power without formal support from any party,” related Patricio Navia, “he boldly convened a referendum on constitutional reforms. Peruvians overwhelmingly supported Vizcarra’s position.” On November 23, Lima bore witness to a march of thousands of students, professors, and workers gathered around the demand for a Constituent Assembly.

The popular will of Peruvians is clear: like Venezuelans in 1999, they call for a Constituent Assembly, selected by voters, to create a new Peruvian Constitution and end their neoliberal nightmare. With their vocal support for a new Constitution Peruvians follow a path recently taken by other Latin American countries. In October 2020, eighty percent of Chileans voted for a new constitution created by an elected assembly.

Hugo Chávez started this movement in 1999, creating an elected Constituent Assembly that minted a new Constitution for Venezuela, reversed the country’s corrupt “democratic” neoliberalism, and made them a beacon of hope for the region. Ecuador followed suit in 2008, approving the world’s first Constitution to “recognize legally enforceable Rights of Nature, or ecosystem rights.” Bolivia followed in 2009, enshrining the plurinational status of the nation — a model that would suit Peru, where a majority of the population has some Indigenous ancestry. Cuba made major changes to their Constitution as recently as 2019. Far-reaching public consultation characterized all these processes.

Latin American Rises Up Against Neoliberalism

In Chile, Bolivia, and Venezuela, mass mobilization of protesters and social movements were required to formulate, initiate, and defend these political decisions.

In Bolivia, the landslide election of new president Luis Arce of the Movement For Socialism (MAS) party in November dealt a much-celebrated “blow against neoliberalism.” Under President Nicolás Maduro, Venezuela continues on an anti-imperialist, anti-neoliberal trajectory launched in 1998, and defended in 2002 when hundreds of thousands of Venezuelans descended on Miraflores Palace and overturned a coup, demanding the reinstatement of their newfound democracy. One of the first — and only — actions of coup President Pedro Carmona was to cancel the 1998 Constitution. Chávez was reinstated a few days later.

When Lenin Moreno gained the presidency of Ecuador in 2019, he reversed the left-leaning programs of his predecessor Rafael Correa, embracing neoliberal policies including the acceptance of a $4.2 billion loan from Washington, DC’s International Monetary Fund. By October 2019, as widespread public mobilization in Ecuador generated a “mass movement against neoliberalism,” Moreno was forced to backpedal, cancelling austerity measures to quell the protests. The 2017 electoral victory of Andrés Manuel López Obrador in Mexico was largely due to his bold promise to end the “long dark night of neoliberalism.”

The struggle for dignity, sovereignty, and a true and functioning democracy for Latin American nations won’t be concluded at the stroke of a pen — as the reversals in Venezuela and Ecuador, or the one-year reign of the illegitimate Áñez regime in Bolivia clearly demonstrate. However, if a true and functioning democracy is to thrive in Latin America, this revolutionary wave shows that it cannot occur under the aegis of neoliberal policies or the Constitutions that were promulgated under their auspices. Unlike in the U.S or Canada, for example, mobilizations demanding constitutional reform and repeated prosecution of politicians offer hope for Peru.

[read Part One of this two-part series: “Chile: Ground Zero for Neoliberalism”]