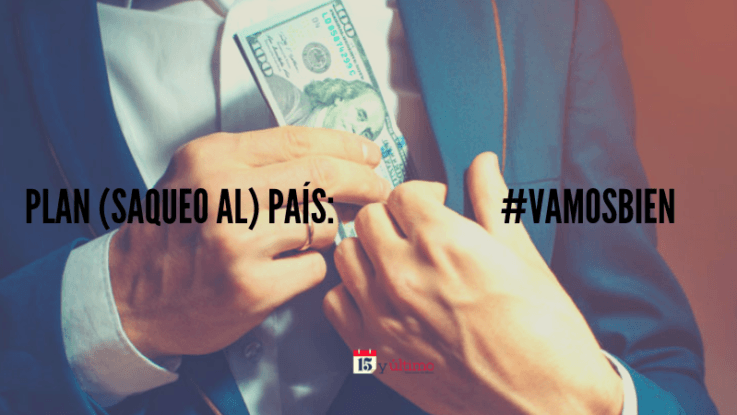 Economy Opinion
May 28, 2019May 28, 2019 orinocotribune CITGO, looting, US Imperialism, US Sanctions

On February 3, in the heat of the self-proclamation of Juan Guaidó as interim president (sic), we affirmed in this same space that the economic plan presented by the Taliban oppositionism entrenched in the AN and which he currently heads, instead of “Plan País” should be called “Plan Looting the Country”.

What happened between then and now has proved us right.

We pointed out that the guaidozano tried to become a proconsular occupation agency, a form of imperial government in the occupied territories used by the Romans and revived by the Gringos in Iraq under the figure of Paul Brenner. However, as is well known, the crux of all proconsulato has always been to control a territory to profit economically, so the necessary condition of the second is the first. To all lights, this has not been the case of the guaidonato.

Now, the fact is that not controlling any territory has not prevented the opposition from advancing in its agenda of plundering the country anyway. And by virtue of this, it is committing crimes that in any court of the world, beginning with those of the United States themselves, would be judged as treason to the fatherland.

The main crime has been the theft and dispossession of assets of the nation, repeating here a crime committed in 2003 against Iraq, in 2005 against Iran and in 2011 against Libya, assets that only in the case of Iran under the agreements by the Nuclear inspections have been partially recovered. The aggravating factor is that in the theft of Iranian, Iraqi and Libyan assets, the Americans and Europeans involved did not count on internal collaboration from the affected countries. In the case of Guaidó and his family, this collaboration has been active, public and notorious.

In this way CITGO was snatched from the country; they have frozen accounts, confiscated reserves and prevent essential payments, including health payments for patients (even children) that wait for surgery procedures and / or depending on complex treatments outside the country. For this reason, at least two minors have already died.

Non-compliant, they are now trying to prevent boats with food from arriving in the country, which would complement the air blockade decreed in recent days by the United States Department of Transportation. All for the sake of raising a medieval siege (as happened in the famous television series of which many of the followers of these abuses are fanatics), seeking to starve the besieged population and then enter to snatch, given that they send letters every day to the Southern Command.

But the most recent cherries on this cake are observed this week that just passed.

First, with a fraudulent payment of PDVSA bonds, the famous 2020. And we say fraudulent for the obvious reason that they have no power to do so, so they are usurping functions and misappropriating funds, violating the Constitution and several laws. But in addition, the payment of these bonds shows the nature and rationality of the interests of the guaidonato in the last instance: being in the National Assembly, they made grandiloquent declarations about the “swindling of the Nation” that they represented, “fruit of the corruption of the Chavista regime” that has brought us to the current bankruptcy of the country”. Well, barely attaining the opportunity, they wasted no time in cancelling them. That is to say: in the middle of his speech on the humanitarian emergency, they chose to privilege the payment of bonds that until recently were considered fraudulent and corrupt. This action also highlights the power of the holders of these bonds, which even enjoyed a safe conduct from the US court that ruled against CITGO last year and now enjoy the rush of the guaidonato. “A powerful gentleman is Mr. money”, said a poet once. And in this case the gentlemen who own these bonds would not be “reds” (even if there are any), otherwise the move would not make sense.

The second icing, which makes the previous one pale, is the appointment of lawyer Lee Buchheit, specialist in litigation and debt negotiations as an ad-honorem adviser to the guaidonato in matters of restructuring the external debt. Here, the same: it is an illegal appointment within the framework of the usurpation of functions. But what is really serious, is that they are hiring him to defend the interests of Venezuela, a subject who comes from a whole career and retired at the beginning of this year, at the law firm that represents the majority of the holders of the bonds of the Venezuelan debt.

That is, when Buchheit sits down to negotiate the restructuring of the debt in the name of our Republic, on the other side of the table will be his boss at the Cleary Law Firm, Mark Walker and his colleague Richard Cooper, both representing the clients that Last February Buchheit himself defended as Cleary’s partner.

There is hardly such a serious antecedent of conflict of interest in debt negotiation as this one that is intended to be forged. And notice that we are talking about external debt, in whose negotiations historically almost everything has been seen. However, there is a precedent: the claim of Francisco Rodríguez -the Venezuelan representative of the other pack of forks in his firm Torino Capital- to become the economy minister of the government of Henry Falcón to pay from there the clients whose interests he represents. By the way, he was one of the first to come out in his defense before the complaints made about it.

The third icing was the illegal operation carried out against the Venezuelan state-owned company Monómeros, located in Colombia. It is a company owned by PDVSA-PEQUIVEN, which owns about half of the fertilizer market in Colombia and exports to several countries, including ours. But beyond the seriousness of the matter, as denounced by the information blog La Tabla, in the appointment of the “Board of Directors” of occupation are characters with records provoking caution. Just to mention three: Jon Mirena Bilbao Barona, named president and who was fired from PDVSA in 2003 for his active participation in the oil sabotage. Mireya Ripanti, who in addition to being fired for the same cause, was accused in 2018 of a fraud scheme continued since 2002, through a foundation formed with employees and former employees of the state oil company and that cost the industry more than 5 one billion US $. And finally, but no less serious: Yadid Jalaff Reyes an ex-football player and criminal lawyer turned into a businessman in the city of Barranquilla. This lawyer, whose only known case of litigation was as defender of the Canadian ex-wrestler and drug dealer Steven Douglas Skinner, sentenced to life imprisonment for a homicide in his country and accused by another in Colombia, where he was linked to the trafficker and paramilitary “the crazy Barrera” ( captured in 2012 in San Cristóbal) for the shipment of liquid cocaine to the United States.

While it is understood that the impunity with which they are acting is due in part to the threats of invasion that are looming over the country, we must be clear that, as mentioned in a recently published article here, within the framework of the dispute over political power, a series of processes of appropriation and distribution of public wealth have taken place through arbitrariness, with an enormous burden that is harmful to the country both immediately and in the future. It is difficult to know where this is going to stop, between the irresponsibility of some and the omissions of others. But the truth is that what we are seeing borders on a level of dangerousness that can not continue to be tolerated, if we want to continue living in society and not in an arena where the most criminal -in this case acting as a suit and tie- do whatever they want to do.