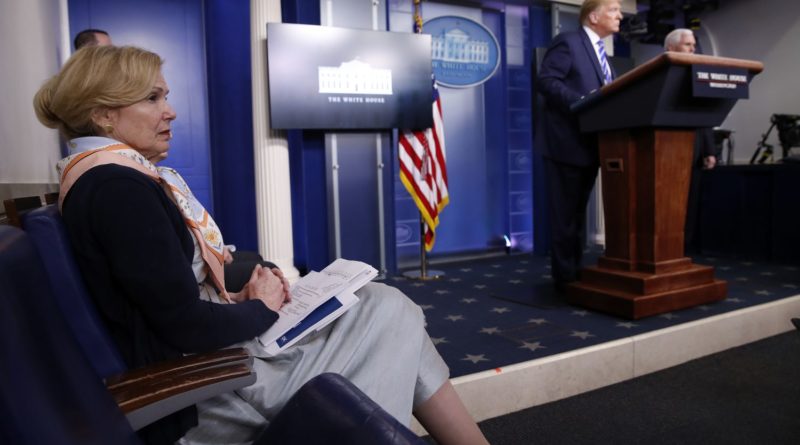 “Please do not eat detergent tablets or inject any kind of disinfectant.” The message was broadcast on Twitter by the Washington State emergency service on Thursday afternoon, after listening to the daily press conference of the country’s president, Donald Trump, about the coronavirus catastrophe in the US. Trump had once again entered swampy science gardens. Marveling at the destructive power that certain disinfectants, as well as sunlight and UV light, had demonstrated against the virus in the air or on a surface, he wondered what they could do to combat the “invisible enemy” inside a human body.

“Suppose we hit the body with tremendous ultraviolet light, or simply with very powerful light,” he said. “That said, suppose you bring that light into the body, through the skin, or in some other way. Then I see the disinfectant, which KO the virus in a minute, is there any way we can do something like that by injection? Because you see that it enters the lungs and does tremendous damage to the lungs, so it would be interesting to try it.”

Trump made this dubious contribution to the debate after Bill Bryan, director of the Science and Technology Division of the Department of Homeland Security, held a presentation on certain measures to prevent the spread of the coronavirus.

Ultraviolet lamps can harm people if they are used in the wrong way. And you only have to read the directions on the packaging to know that bleach and other disinfectants, in addition to killing viruses, can kill people. But the president did not hesitate to speculate on its uses, without scientific support, and sought the approval of Deborah Birx, coordinator of the response to the coronavirus in the White House, asking if she knew the success of light as a tool against viruses. The elegance of the doctor in containing expressions of amazement during the press conferences that she shares daily with the president are admirable.

“Not as a treatment,” replied Dr. Birx. “I mean, the light is certainly good. When you have a fever, it helps your body respond.” Trump cut it short and insisted that it is “a great thing to research on.”

The clarifications by the scientific community occurred on social networks and from various forums. “For those who need to hear this tonight: the products you use to directly kill viruses and bacteria usually kill healthy human cells as well,” said Dr. Ryan Marino, a toxicology expert at Cleveland University Hospitals, on Twitter. “Please don’t do that. Sincerely, all toxicologists,” tweeted Harvard professor Bryan D. Hayes. “Injecting or ingesting any type of cleaning product,” recalled pulmonologist Vin Gupta on NBC, “is a common method for people who want to kill themselves.” Brands of various common disinfectant products became trending on Twitter. Even some manufacturers were forced to make public statements clarifying that no one should ingest their products.

RLATED CONTENT: Pompeo Threatens WHO with “Regime Change” or Withdrawal

The warnings are not trivial. The president has already said that the virus would disappear “miraculously” with the arrival of the heat and has also fueled previously unsubstantiated scientific hypotheses. The danger is evident. A man died in March, in Arizona, when he self-medicated with a fish tank substance that contains hydroxychloroquine, the same active ingredient as the antimalarial drug whose use against the coronavirus, not supported by science, the president promoted alleging that “there is nothing to lose”.

This Friday, the Food and Drug Administration (FDA) warned that people should not take chloroquine or hydroxychloroquine to treat covid-19 outside of a hospital or clinical trial, citing reports of “serious heart rhythm problems. ” “We will continue to investigate the risks associated with the use of hydroxychloroquine and chloroquine for covid-19, and when we have more information we will communicate it publicly,” the agency explained.

Two hours of a daily press conference, a complex scientific matter, an electoral year and a president with a legendary lack of humility and besieged by criticism of his management of the crisis. It is an explosive combination, which has often produced friction with the scientific community and its own experts, forced to juggle to nuance their boss’s claims without infuriating him.

With extensive experience in reality TV, Trump has turned his daily appearance before the cameras into a real reality show that reveals the tense dynamics that underlie the management of the coronavirus crisis by the White House. That of a group of experts, including Dr. Birx herself and the epidemiologist Anthony Fauci, subtly trying to maintain a scientific narrative in the midst of a political team, led by a president without filters, permeable to multiple theories indiscriminately and tending to listen more to economic advisers whose priority is the urgency to resume activity in the country.

Featured image: The coordinator against the pandemic, Deborah Birx, at the press conference this Thursday of the American president, Donald Trump. Photo: Alex Brandon (AP)