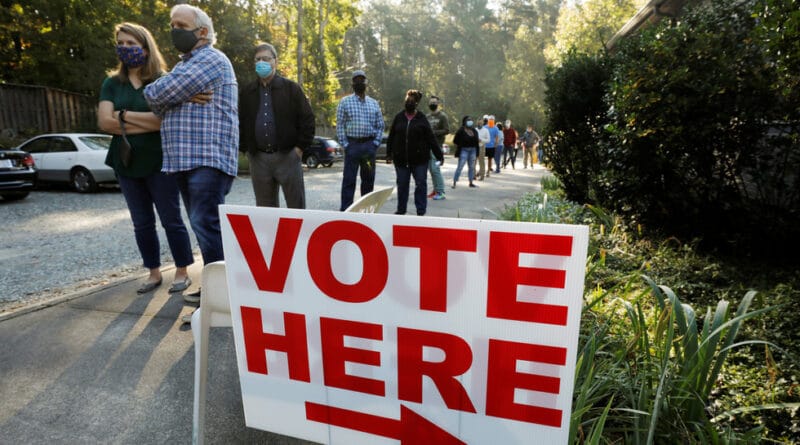 October 16, 2020.-  Less than one-sixth of US voters believe that American democracy is working “very well,” while most Americans seem to agree that their society is extremely divided about its core values, a new survey has shown.

Almost three quarters of registered voters believe the nation “is headed in the wrong direction,”says a poll conducted by the Associated Press-NORC Center for Public Affairs Research, the latter being a self-described non-partisan research group at the University of Chicago. It’s based on interviews with 1,121 eligible voters from all the US states and the District of Columbia.

The absolute majority, or 85 percent, said that the American society is “greatly divided” over the most important values and just over one third expects things to get somewhat better in the coming years.

The poll also revealed a perceived sorry state of US democracy, with only 15 percent of the respondents saying it still worked “extremely or very well.” Another 36 percent said it still is keeping afloat while a total of 49 percent admitted it either does not look particularly good to them or is no good at all. Supporters of President Donald Trump appeared to be much more confident in US democracy than those of his Democratic opponent in the November 3 election, Joe Biden.

The partisan divide was also clearly showing in predictions of the future, with 76 percent of Trump supporters believing a Biden election victory would only worsen the existing divisions and 91 percent of Biden backers saying the same of a Trump win. Neither candidate is seen by the majority of respondents as capable of uniting the nation or strengthening its democratic principles.

A significant number of respondents were also concerned about potential violations at the upcoming elections. More than a half of Biden’s supporters are more or less confident that the vote count would be accurate. This figure, however, falls down to just 28 percent when it comes to Trump’s backers.

The pro-Biden respondents also appear to be more concerned over potential voter suppression, while those supporting Trump cite voter fraud and an ability of supposedly non-eligible people to vote as the major problem. A Pew Research poll held back in early 2020 showed that almost 60 percent of Americans were dissatisfied with the way US democracy was working at that time.