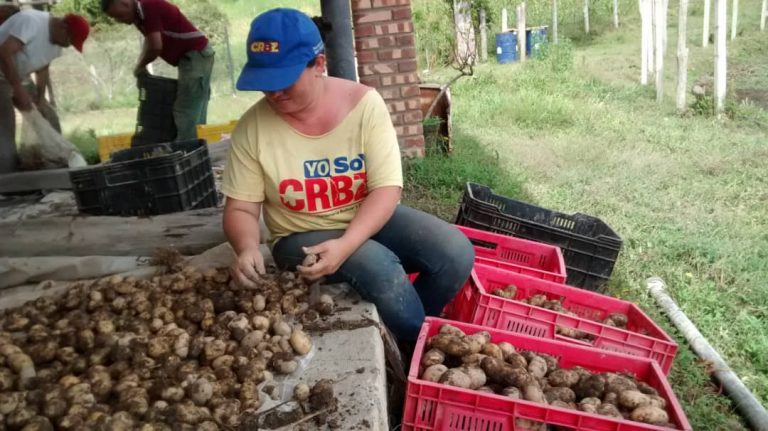 A momentous event occurred in Táchira this week: the first of the potato seed mills that promoted and organized the National Productive Alliance, located in Michelena, successfully carried out the first harvest of two types of native potato seed (granola and Andinite), an item that for its caloric and nutritional qualities is strategic for the food of our people.

The fact that people of our field have organized to work methodically and systematically in the reproduction of native seed, cultivated completely in an organic, sovereign way, not dependent on the agribusiness transnationals, implies a fundamental step to achieve a productive development of the field that really points to the defense of the sovereignty of the country, although the excellent result of its work does not imply for now the extensive planting of these potato varieties. It is also important that it is not an isolated event, but that it is part of an alliance between the people organized in the National Productive Alliance, the Ministry of Science and Technology, represented directly by Minister Gabriela Jiménez, the partners of the Association of Integral Producers of the Paramo (PROINPA), the Technical Unit for Research, Training and Extension (UTICEX) of the Ministry of Agriculture and Land. The alliance consists of a project for the adaptation and diversification of these potato seeds so that they can be developed on smaller land parcels so that they can increase the planting area of this item and increase their production.

RELATED CONTENT: The US Approves Bill That May Legislate Hybrid Warfare on Venezuela

The numbers of this first harvest of Michelena’s core speak for themselves of the potential and scope of this initiative. From the granola variety, a total of 278 kilos were harvested (90 kg large, 100 kg medium, 68 small and 20 million); of the Andean variety, 135 kilos (60 kg large, 60 kg medium and 15 kg mil) were harvested. In total there were 413 kg between the two varieties, of which 90% are in optimal healthy conditions. 100% were worked with agroecological techniques. This was reported by Rubén Rodríguez, state head of La Corriente and the National Productive Alliance, and member of the Agroproductive Cabinet articulated by the Psuv and the Táchira protector, Freddy Bernal.

What is coming now for the National Productive Alliance in this line of work? All that seed is now going to be sown again by the same nuclei of semilleristas and by new core groups that will be formed in other municipalities of the state to continue reproducing the seed and adding more organized people to this project. This, in addition to new seed that continues to be delivered by the Ministry of Science and Technology, as happened in the recent Seed Exchange meeting held in Cárdenas, Táchira. We are facing a concrete fact that demonstrates with excellent results what the key formula is to achieve the goals of recovering field production, developing it to the fullest and continuing to fight for the sovereignty of Venezuela in the face of the criminal blockade of the United States and the multifaceted crisis that the country lives. What is that formula? A strategic alliance between the people who know how to produce (peasants, small and medium producers) and state institutions so that, together, building serious and viable proposals, giving space to the participation and power of the people and strengthening them with technical support, resources and support for that organization of the people, concrete steps are taken.

It is like this: with people who have no other interest than to produce for Venezuela and that allows for a dignified life, it is with them a broad and democratic alliance must be built to move towards the productive, mixed and humanistic agrarian model that Chavez proposed and promoted.