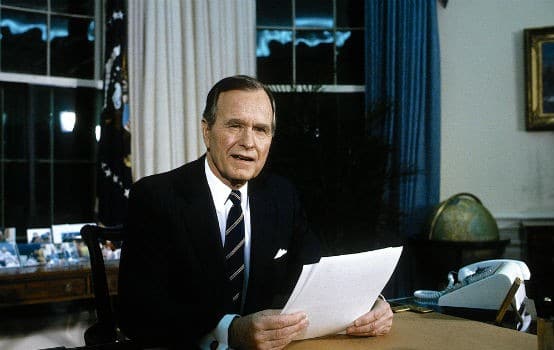 Panama marked the 30th anniversary of the US invasion with an official day of mourning for the first time this year:

Panama declared a day of national mourning for Friday, the 30th anniversary of the U.S. invasion that ousted dictator Manuel Noriega and resulted in hundreds of deaths in the Central American nation.

The measure approved Wednesday by members of President Laurentino Cortizo’s Cabinet, a first for the country, has been a main demand of relatives of those killed in the military operation, who see it as a symbolic step toward justice for the deaths of Panamanian civilians and soldiers.

The invasion of Panama was the first regime change war of the last thirty years. No one realized it at the time, but it marked the start of an era of hyperactive militarism that has not ended yet. It is the first U.S. war that I can remember, and it is sobering to consider that the U.S. has been engaged in hostilities somewhere in the world almost every year since then. President Bush had questionable legal authority to launch the invasion, and Congress certainly never had time to debate or authorize it. Because the war was short and has been overshadowed by larger military interventions since then, it has faded into obscurity, but we should remember it for the damage that it did and for the precedent of arbitrary presidential warmaking that it set. It was the first in a series of wars against small, outmatched countries that posed no threat to the United States.

The invasion killed hundreds of Panamanian civilians. During the run-up to the invasion of Iraq, The San Francisco Chronicle reported from the neighborhood in Panama City destroyed during the invasion:

Bernabela Vargas, 53, concedes that Noriega’s ouster remains popular despite the destruction wrought by war and subsequent looting. But she said the ferocity of the attack, which involved U.S. Marines, a Ranger regiment and the 82nd Airborne Division pitted against a weak military force with scant resources, was excessive.

“This was not the way to help us,” said Vargas, who says some of her shell- shocked neighbors still flinch at loud sounds.

“The problem was the magnitude,” he said. “To get one person, you didn’t need so many deaths.”

The invasion of Panama was obviously a war of choice, and it is difficult to see how Operation Just Cause was actually justified at the time. Noriega was undoubtedly an awful ruler, but did his removal from power really require the deaths of hundreds of innocent people?

RELATED CONTENT: Another US Regime Change Operation is Taking Shape in Mexico

Three decades later, many of the relatives of those killed during the invasion are still seeking answers:

“Finally there are important signals for the victims as the 30th anniversary approaches,” Ayola said. “The national mourning and the possibility for other families to identify their own so they can be buried properly. They cannot remain in oblivion.”