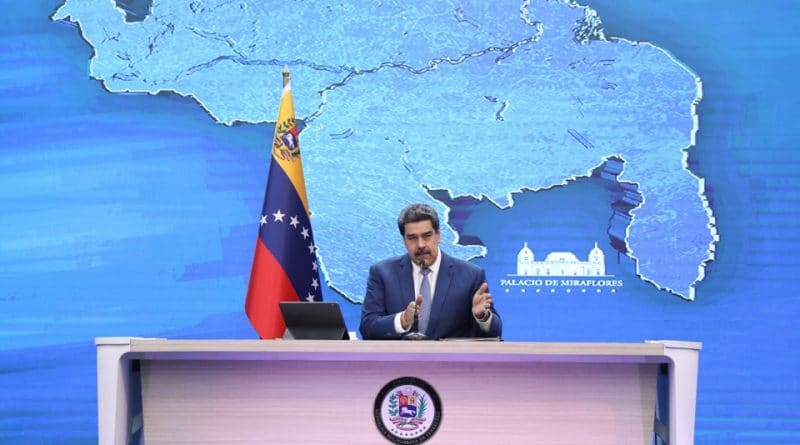 The warmongering and interventionist policy of the United States empire has failed, as evidenced by the “pathetic” situation in which Afghanistan was left following the 20-year U.S. occupation, according to Venezuelan President Nicolas Maduro.

What’s more, the Venezuelan President said that the misinformation given by U.S. intelligence just days prior indicates that they’re either tragically misinformed “or someone within the United States intelligence apparatus is conspiring” to try to sink the U.S. President.

President Maduro told international press, from the Ayacucho Hall of the Miraflores Palace, that Washington’s strategy in Afghanistan was the vision they had for Venezuela; “A military intervention to bring us a civil war” using the principle of the Responsibility to Protect (R2P), sponsored by the extremist opposition and the Organization of American States (OAS).

In an appeal for peace, President Maduro said that after 20 years of war, Venezuela hopes that the people of Afghanistan can solve their own problems in peace, dialogue and without foreign intervention.

“We are preparing ourselves with a powerful Bolivarian National Armed Forces, with more than 4,500,000 armed militiamen throughout the national territory, to tell any empire in the world: if you come to Venezuela, you’ll get in, but you won’t get out. To enforce respect for this land glorious (…) Venezuela wants peace and tranquility,” he said.

Below is a translation of the statements made by President Nicolas Maduro to foreign press when asked about developments in Afghanistan, during Monday’s press conference in Caracas.

“Those images that we have seen.. terrible. The United States withdraws from Afghanistan and leaves a country in civil war. 20 years later, they had said that they had built an army of 300,000 soldiers with the best weapons in the world. Lies! Six days ago the President, sorry, U.S. intelligence said for the Taliban to take Kabul it would take 90 days. They are either well misinformed, about a country that it has intervened in like Afghanistan, well misinformed—which speaks volumes about the decline of the U.S. empire—or someone within the United States intelligence apparatus is conspiring to misplace and harm Joe Biden. With the experience we have I say, someone in the United States intelligence apparatus gave recommendations to sink Joe Biden, because you can see the calls of the U.S. right and Trump yesterday for the resignation of the President of Biden. They begin to develop a coup strategy that we know here in Venezuela. The images of truth, of the situation of chaos, decomposition, the destruction of Afghanistan that the United States left after 20 years, are pathetic!”

“And what happened in 20 years in Afghanistan? Wars, bombings, destruction, bombs. What did the US military intervention in Afghanistan solve? What did it solve? How did it help the people? Deaths, and deaths, and deaths. How did military intervention help the people of Iraq? How many dead? More than a million in Iraq. How many deaths were there in Libya? How many died in the civil war and the bombings in Syria? How do we see what happened in Afghanistan? That the warmongering and interventionist policy of the United States empire in the world has failed! And that they should draw very clear conclusions in their threats to the other regions of the world.”

“In this same room, in October 2001, after the horrific terrorist attacks against the Twin Towers in New York, Commander President Hugo Chávez said: ‘Violence cannot be fought with more violence, terrorism with more terrorism, not like that,’ said Commander Chávez. Look for the recording. And he showed the cover of the newspaper 2001 for that day, there is the date. On the front page of the newspaper 2001 a man appeared in Kabul, the capital of Afghanistan, in his destroyed house, with his children killed as a result of a bomb dropped by order of George W. Bush in his air strikes against Afghanistan, and Commander Chávez spoke from your heart. He said: ‘not like this, not like this, you can fight terrorism with more terrorism, violence with more violence.’ He said it more than 20 years ago and that led to the threats of the George Bush administration that led the United States government to order the opposition and the Venezuelan right to begin their preparations to overthrow Hugo Chávez. That gave rise to the plan that culminated in the coup on April 11. Find out, you are very young, find out, there are the declassified documents.”

“You saw the airport, you have seen it, there are images that little have been known. Terrible, terrible, terrible. Starting the planes of the United States, there are the people of Afghanistan, subjected to 20 years of war, destroyed, abandoned, then running, to leave desperately on plane, from their own country. There are some terrible images, that we are not going to pass, of some Afghans who managed to hang themselves from the landing gear of the plane, and when the plane starts, when it is taking height, the bodies of the Afghans fall, as Afghanistan falls, before history. What lessons is the world going to draw? Who calls for more military intervention in the world? Who asks for it, who supports it? This is what they wanted with Venezuela, a military intervention to bring us a civil war. This has us recalling the images of Vietnam, the year 1975 and the escape from Saigon. We follow this news, live and direct, in real time on Sunday morning. I woke up at 8, 9 in the morning watching this news, surprised at what was happening and the threats of sanctions continue, Antony i Blinken came out to threaten more sanctions against Afghanistan. Not enough for you? The deaths, the civil war, terrorism, the wounded, the pain, the chaos and the despair of Afghanistan to continue to threaten it with sanctions. In the 21st century, the world of sanctions, of military interventionism, of war, has to end, the U.S. hegemony. It has to end in the 21st century. The United States will always be a great power, but hopefully, we aspire to be a power of peace, the people of the United States want it.”