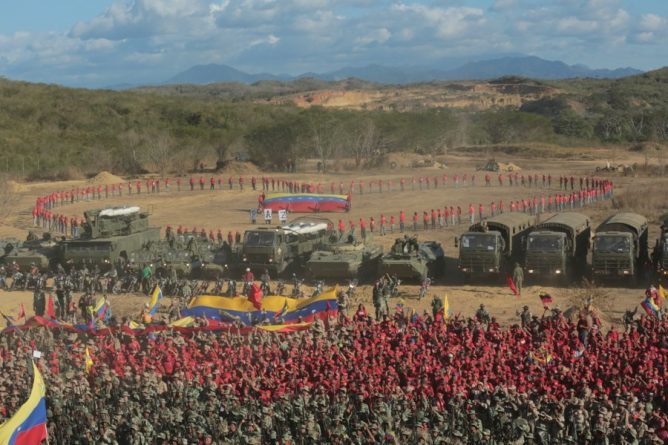 The Angostura 2019 Military Exercises began today; the President of the Bolivarian Republic of Venezuela and Commander-in-Chief of the Bolivarian National Armed Forces (FANB), Nicolás Maduro, oversaw the Caracas air defense system at the facilities of Fort Guaicaipuro , Miranda State, on Sunday.

Accompanied by members of the cabinet, the president inspected weapons such as 25-meter anti-air missiles, anti-aircraft system Igla-s and ZU23. At the site, a mobile control station with a 60-kilometer radar was also displayed, as well as a control vehicle capable of selecting targets.

To demonstrate the potential of the equipment, a short-range anti-aircraft artillery round was fired by the Air Defense Brigade. The officials recreated a situation in which they tried to neutralize a group of SPECOPS, with the mission of sabotaging an electrical station in Caracas, the enemies were neutralized with an ambush and use of the ZTU-23 system.

The soldiers of this maneuver gave as a gift the first missile shot by a militiaman, trained in the Bolivarian Revolution, to the President. “I congratulate the entire CODAI (Comprehensive Aerospace Defense Command), its soldiers, officers, militiamen because it has designed an anti-air defense system with the correct vision, the civic-military union. The professional and scientific strength of our Bolivarian National Armed Forces and the passion to give their lives for the country and our people,” said Maduro.

He affirmed his duty to equip the Fanb with the best aerial armament and to make the skies of Venezuela impregnable.

“I receive this gift as a commitment and I will return it by thousands,” he said, referring to the Igla-s missile received as an offering from the union between the people and the Fanb. “We are going to invest enough so that Venezuela has its entire air and missile defense system,” he said.

He reiterated that Venezuela is a territory of peace, where external interference will not be allowed, specifically from the Government of the United States.