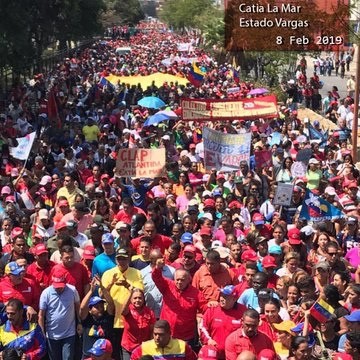 The President of the Bolivarian Republic of Venezuela, Nicolás Maduro, recognized the massive participation of the Venezuelan people in the recent mobilizations against the foreign intervention on Venezuela, promoted by the government of the United States.

“A deep patriotic feeling has been awakened among the people, who have taken to the streets in defense of sovereignty and the Constitution. The mobilizations of Catia la Mar and Porlamar were extraordinary, full of love, commitment and loyalty for the Homeland. Thank you!” said the national president in his Twitter account.

This Friday, in the states of Vargas and Nueva Esparta, the first vice president of the Socialist Party of Venezuela (PSUV), Diosdado Cabello Rondó, led mobilizations of men and women who came out to ratify their commitment to defend Venezuelan sovereignty.

On January 29, from the Miraflores Palace, the head of state exhorted the Venezuelan people to permanent mobilization in the face of US pretensions to invade the country using the excuse of supposed humanitarian aid

“I tell all the fighting men and women, the youth of the whole country: this is our flag, this is our true north, this is what we will defend: the sacred symbols of a country that has to be respected, our flag of a beautiful homeland that should wave victorious, always free, in the standards of the liberators,” President Maduro said at that time.