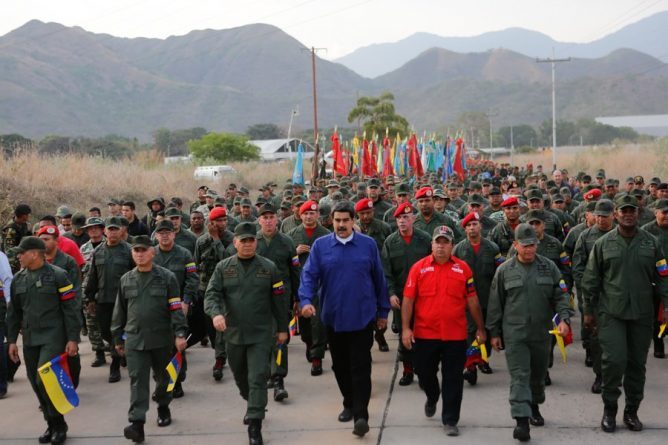 On Friday, the Venezuelan President Nicolás Maduro, led the March of Military Loyalty with the General Staff of the Bolivarian National Armed Forces (FANB) and members of the Integral Defense Zone (ZODI) stationed in the state of Aragua. The route of 2 kilometers unwound in the valleys of the central state, to demonstrate the loyalty of the military body to its commander in chief and reaffirm their commitment to defend the Venezuelan territory from any harassment and threats internal and external.

During the event the head of state awarded medals to officers of the military institution for their outstanding work in carrying out their duties to ensure the defense of the homeland, especially their actions during the events of April 30 near the airbase Generalissimo Francisco de Miranda of La Carlota.

The commander-in-chief of the FANB said to some 6,500 military personnel that in Venezuela there will be no more betrayal or coup plotting because “the Bolivarian National Armed Forces will continue to travel the path of the Republic, the union, of cohesion and construction of the future. You are the backbone of the Republic. ”

RELATED CONTENT: “Minister Jorge Rodriguez and Governor Hector Rodriguez Came Back With Good News” – Talks with the Opposition in Norway

Maduro told the audience that the military entity should be constantly strengthened.

“We need to have a complete and powerful Navy, Air Force, Army and National Guard,” he said, referring to the order given that the militiamen and militia youths be incorporated as official troops in the Bolivarian National Armed Forces, as a complement “to ensure that our country in any circumstance remains in peace as a maximum value”. He also urged the military body to redouble efforts to prevent foreign governments and radical political opposition factors from affecting the institutional and patriotic consciousness of the FANB.

“We must increase our vigilance so that imperialism and the golpista oligarchy do not enter one iota into the heart of any soldier; defeat the blockade (the conspiracies) and say that in the Bolivarian National Armed Forces there is no treason, there are no coup plotters; there are revolutionaries, Chavistas, socialists, because the Bolivarian National Armed Forces will continue to travel on the path of the Republic, of union, cohesion and construction of the future,” he said.