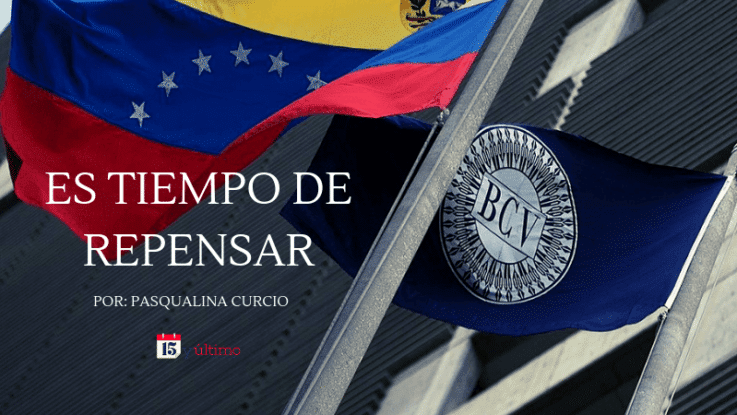 In the Central Bank of Venezuela (BCV) they thought that by decreasing the amount of money they would stop hyperinflation. Trapped in the monetary paradigm, they said that prices went up because the monetary mass increased. They acted accordingly. From August to date, the amount of money in relative terms decreased by 41%. During the same period the prices increased 8326% and have not stopped rising.

They also thought that the “depreciation” of the bolivar is due to banks allocating their surplus reserves to buy foreign currency, which increases the exchange rate. They established a 100% legal reserve, but the exchange rate keeps rising. It went from 60 Bs / US$ in August 2018 to 6000 Bs / US$ today.

RELATED CONTENT: The Exchange Game of Thrones: Notes on the “end” of DICOM (I)

On the corner of Carmelitas (BCV) they thought that by releasing the exchange market, Dolar Today would disappear. They said that the market with its supply and demand would be in charge of “balancing” the exchange rate. Since September they made it more flexible. Yesterday they finished erasing it. What they did not think of is that they would be opening a gap for the flight of capital. Meanwhile Dolar Today continues and will continue to manipulate the exchange rate because it is an imperial weapon.

With encrypted thinking, it occurred to them to anchor the bolivar to the petro, which ended up being the anchor of the bolivar to DICOM, which in turn has been chasing the exchange rate politically manipulated by Dolar Today. They did not think that this paradox, instead of strengthening our currency, would force a greater depreciation.

In response to President Maduro’s rectification call, let’s rethink that hyperinflation is induced by the criminal manipulation of the exchange rate. Let’s strengthen the bolívar by increasing the international reserves in gold and making good use of the currencies that enter for oil. Let’s end the gold mafias in the mines. Establish an automated, public and transparent system to control the use and allocation of foreign currency. Let’s think about backing the bolivar in gold.
Let’s not think twice when raising wages and financing investment and public spending. The working class is the historical subject of this revolution and the human being is the center.

Let’s keep thinking about independent Venezuela, sovereign, powerful and above all, socialist.