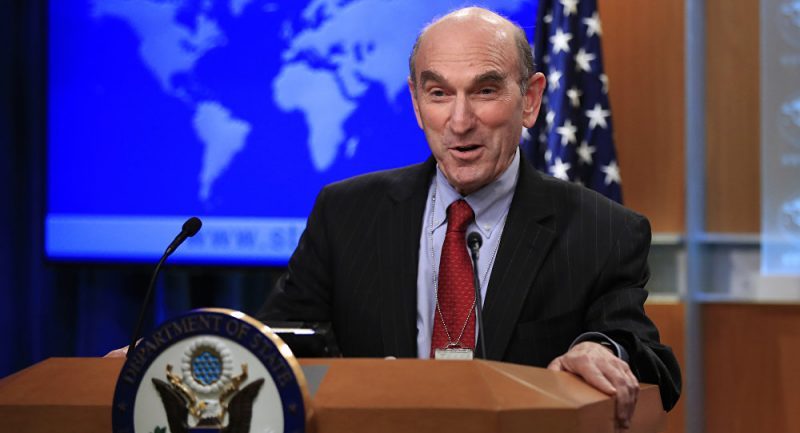 International News
April 27, 2019 orinocotribune Chavismo, Elliott Abrams, President Maduro, The US is lost in the space, US Imperialism

The Venezuelan president lambasted Donald Trump’s Special Representative for Venezuela Elliott Abrams after the diplomat appealed to members of the pro-Maduro governing party to join the opposition and call for elections. Maduro accused him of trying to deceive the Venezuelan people when recently talking about “defending the legacy of Hugo Chavez”.

President Nicolas Maduro has launched a war of words against US Special Representative for Venezuela Elliott Abrams, saying that the latter was trying to confuse and divide the Venezuelan people, “putting on a mask of a Chavista”.

The Venezuelan president slammed Abrams as “an old hawk of the Cold War” during his meeting with teachers in Caracas, broadcast by the country’s state TV.

“Eliott Abrams surprised the world and came out as a defender of the legacy of Commander [Hugo] Chavez … he claims to be an advocate of Chavismo and Chavez’s legacy… is this credible? Why is he taking that turn? Why do you mean to say that now Maduro is the bad guy?” the incumbent president noted.

He also noted ironically: “Should we obey him, this chief, vice-king of the Venezuelan lands?”

Maduro emphasized that Chavez’s idea was fighting against US imperialism and defending the sovereignty of Latin America, stressing that Abrams is not compatible with these principles.

The anti-Abrams rant came a day after the US diplomat reportedly called on young Chavistas and members of the pro-Maduro United Socialist Party (PSUV) to join the opposition and call for elections, stressing that the military in a post-Maduro Venezuela would need to “be well paid” and left out of politics.

“If you want Chavismo to be part of your country’s future, and not just its past, it cannot be imposed by force. When the PSUV accepts that it must act solely as a democratic political party, and seek the votes of citizens in free elections, solely through argument and debate, Venezuela will be well on the way to democracy”, Abrams said at an event hosted by the Atlantic Council in Washington, as cited by the Washington Examiner.

When Abrams was speaking, Ariel Gold, Code Pink’s national co-director, stood up with a sign reading “No Coup in Venezuela”. However, security pushed the woman out of the room. The activist yelled “Elliott Abrams is a war criminal” as she passed the stage.

Activists have formed an Embassy Protection Collective and, at the invitation of Caracas, have slept overnight for weeks in the building to prevent it from being seized.

The political crisis in Venezuela broke out in late January when opposition leader Juan Guaido proclaimed himself the country’s “interim president”, just weeks after President Nicolas Maduro’s inauguration for a second term.

The US immediately endorsed Guaido, called on Maduro to step down, and seized billions of dollars’ worth of the country’s oil assets. Several other countries have followed suit, facilitating the takeover of Venezuelan diplomatic missions by Guaido’s representatives.

Caracas is describing the situation as an attempted coup d’etat. Russia, China, Cuba, Serbia, Syria, South Africa, Turkey, Iran, and dozens of other countries have protested the move at the UN, and urged the US and its allies not to meddle in the Latin American country’s internal affairs.