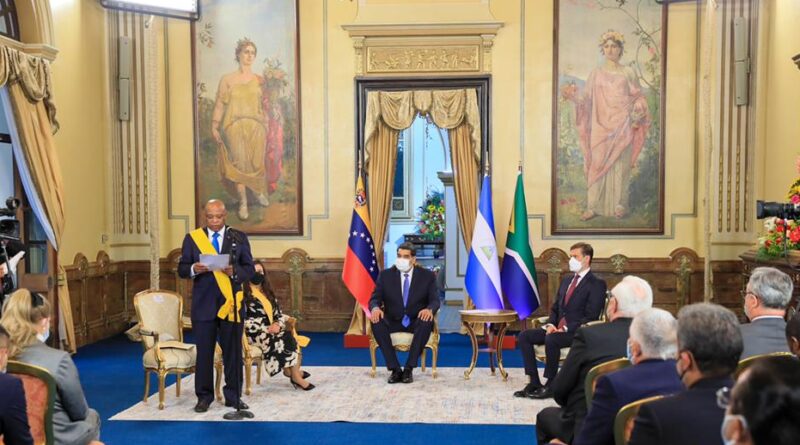 On Wednesday, March 30, the president of Venezuela, Nicolás Maduro, highlighted his country’s struggle for a multipolar and multicentric world during the farewell ceremony for the ambassadors of South Africa and Nicaragua, Joseph Khehla and Yaosca Calderón Martín, respectively, held in the Simón Bolívar Hall at Miraflores Palace in Caracas.

“Venezuela has been, is, and will be the epicenter of the struggles for a new world, an egalitarian world, which can already be seen on the horizon,” said the president, recalling the anti-colonial and anti-imperialist legacy of the South American continent.

At the ceremony, the dignitary highlighted the excellent relations between Venezuela, South Africa, and Nicaragua, nations that have rejected the aggression that Caracas has suffered from at the hands of the United States and the European Union.

“We are a people who know how to give our hearts, we believe in a world of justice and equality, in the world for which the peoples of Nicaragua and South Africa fight tirelessly, a multipolar world,” said Venezuela’s head of state.

High-level meeting between Nicaragua and Venezuela
President Maduro announced that in the coming weeks a high-level joint commission meeting will be held in Managua, the capital of Nicaragua, to address issues such as food production, energy, trade, and scientific cooperation, and to review various common projects with Russia. China, Turkey, and India.

The Venezuelan president took advantage of the occasion to send greetings to his Nicaraguan counterpart, Commander Daniel Ortega, to Vice President Rosario Murillo, and to the Nicaraguan people.

“On behalf of our people, government, and personally, I congratulate you for the mission you have fulfilled in the Bolivarian Republic of Venezuela,” the president told Nicaragua’s Ambassador Yaosca Calderón Martín.

RELATED CONTENT: As Inflation Hits US Workers Hard, do Argentina and Venezuela Provide a Heterodox Toolbox to Confront It? (Part I)

For his part, Calderón thanked the Venezuelan people “for welcoming me as one of their own” and praised the unity and friendship that exists between the nations of Nicaragua and Venezuela.

“The work of Ambassador Joseph guides the historical, cultural, political, and economic relations between South Africa, Africa, and Venezuela,” said President Maduro. “Today Venezuela has the best relations we have ever had, with the brother government and people of South Africa.”

“Venezuela has a very close relationship with South Africa,” reiterated President Maduro through his Twitter account, “we love and deeply embrace the legacy of Nelson Mandela. Very soon we will visit this sister nation to continue building a fraternal relationship of cooperation and friendship with mother Africa.”

President Maduro highlighted the role played by South Africa on the African continent while rejecting the aggression and conspiracies of Western powers that seek to “divide it to impose their interests.”

Likewise, the Venezuelan dignitary asserted that both nations have been developing investment projects in the fields of mining, oil, and for the increase of trade between the two economies.

“I arrived in Venezuela four years ago and I have witnessed how the ties of friendship and union between South Africa and Venezuela have not only expanded, but also strengthened and solidified,” said Ambassador Kelha. “At the end of my official duties, I feel happy and honored to have participated in this process.”