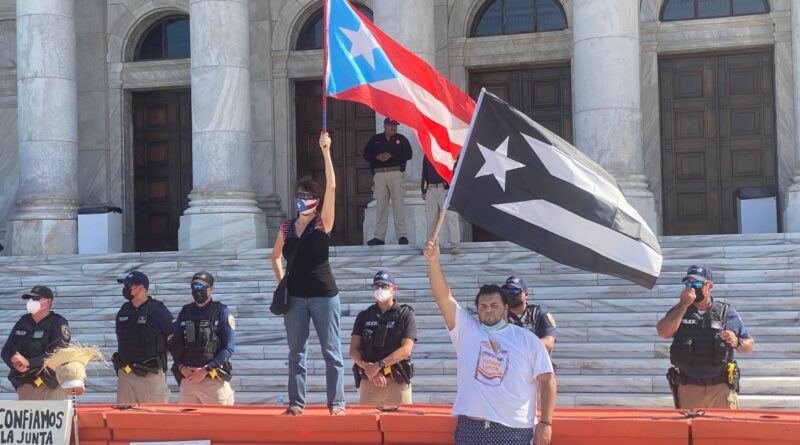 SAN JUAN, Puerto Rico — Gov. Pedro Pierluisi signed the controversial PC1003 bill into law in the late hours of Tuesday, October 26, after weeks of deliberating, voting, and opposition from protesters.

PC1003, now Law 53-2021, seeks to restructure Puerto Rico’s debt as part of the Financial Oversight and Management Board for Puerto Rico’s (FOMBPR) debt restructuring plan, but many have argued that it only serves to establish multi-generational austerity measures that will increase the island’s debt, feed vulture funds, and make Puerto Rico unlivable for the working class.

PC1003, as it was originally proposed, was set to cut pensions by 8.5 percent as well as funding to the University of Puerto Rico, among other public benefits. Protests became a permanent feature of Puerto Rico’s Capitol as PC1003 made its way through the legislature.

After being approved by the House earlier in the month, the Senate was originally supposed to pass the PC1003 on October 18, but pressure from protesters outside the Capitol seemingly achieved its intended goal when the bill did not have enough votes to pass that day. The Senate continued deliberating in the days following but could not reach an agreement, eventually calling for a recess that was set to end on Tuesday, October 26.

The FOMBPR issued the Senate an ultimatum when they announced their recess, saying that they needed to approve PC1003 by Friday, October 22 at 2 p.m. or Puerto Rico would face the continued effects of bankruptcy. The Senate let the FOMBPR’s deadline lapse.

On Tuesday, October 26, after a majority of protesters had left, the Senate approved PC1003. Gov. Pierluisi signed the bill into law almost immediately after it was passed, calling it “a great step forward to end the bankruptcy and get out from under the Fiscal Oversight and Management Board.”

Meanwhile, Reinaldo Colón Vega, president of the Conservation, Technicians, Maintenance and Surveillance Chapter of the Puerto Rican Workers’ Union, calls PC1003 a “detriment to the working class and the direct services that the country receives from the Puerto Rican government.”

“That’s why San Juan Bautista is pointing at them with his finger outstretched,” he said, referring to the statue of Saint John the Baptist that stands in a condemning position across the street from the Capitol. “They have put liberty and dignity under shame.”

Alongside the Capitol protests, students in eight out of the 11 University of Puerto Rico campuses declared short-term strikes to protest PC1003. They specifically called out the university budget cuts that could permanently close at least one university campus.

Mere hours before PC1003 was signed into law, over 3,000 UPR-Mayagüez students decided to call for an indefinite strike with the goal of forcing the Puerto Rico government to deny PC1003 and for the public university system to be classified as an “essential service” so that it could receive guaranteed funding from the FOMBPR.

In the five years since the FOMBPR was instituted by the Puerto Rico Oversight, Management, and Economic Stability Act, it has not declared a single public utility or benefit an essential service.

“This is only the beginning,” said Alondra Belaval, co-secretary of the Youth Wing of the Puerto Rican Independence Party. “The youth is organizing a national movement at the archipelago level to construct the country we deserve.”

Hours after Gov. Pierluisi announced he had signed PC1003, people were already calling for protests and strikes with one flyer calling for people to gather at the street that leads to La Fortaleza, colloquially called “Calle de la Resistencia” (Resistance Street) by protesters.

The Puerto Rico debt restructuring confirmation hearings are set to be held on November 8.