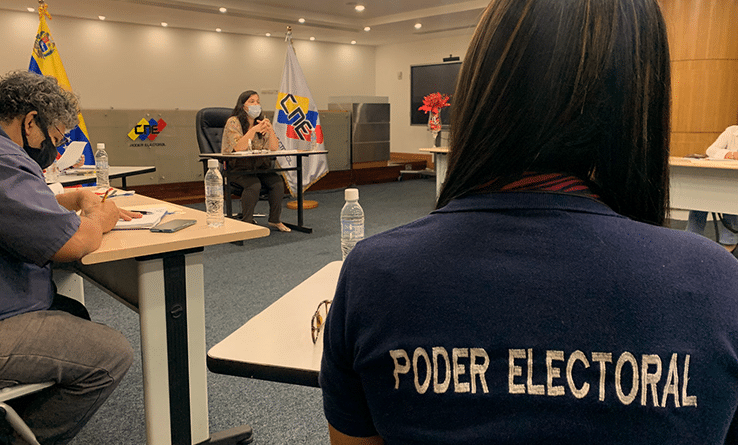 The governing body of the National Electoral Council (CNE) met with members of the Special Commission for Attention to People with Disabilities to fine-tune the measures which will guarantee the capacity to vote of Venezuelans with disabilities in the upcoming regional and municipal elections on November 21.

The president of the CNE, Tania D’Amelio, reported the following statements via twitter.

Furthermore, she explained that the following officials participated in the meeting: Pedro Infante, Deputy of the National Assembly, Moraima Cazola of the Ministry of Education, Beatriz Luque and Yolanda López of the Education for the Deaf organization, and Soraida Ramírez, Carolina Rojas, Yan Carlos Rivas, and Natasha Díaz of the Ombudsman’s Office.

RELATED CONTENT: The Broad Agreement that Has Made 21N Mega-Elections Possible

In an interview carried out on the program Aquí Con Ernesto Villegas, recently aired on Venezolana de Televisión (VTV), D’Amelio mentioned that 447,000 registered voters have some degree of disability, and that the CNE would provide each one with all of the guarantees and conditions necessary for them to be able to exercise their right to vote. She also mentioned that a pilot plan has been designed for this purpose.

In this regard, she commented that in the electoral stations Table 1 will be available for these individuals during the voting process. She also noted that these persons will have the full support of the officials operating the election tables.

She highlighted that these individuals would receive the specific support that they needed throughout the election process.