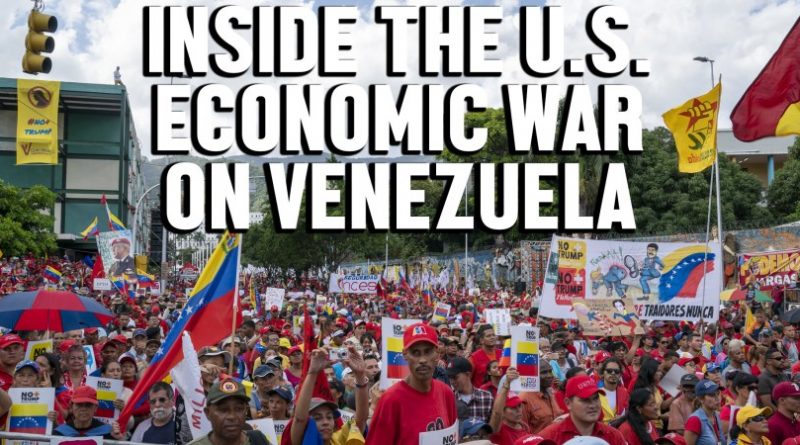 Ben Norton speaks about his reporting in Venezuela, where he investigated how bipartisan US sanctions and Trump’s embargo are making lives hell for civilians.

Guest: Ben Norton, journalist from The Grayzone, who just returned from reporting for two months in Venezuela.

AARON MATÉ: Welcome to Pushback. I’m Aaron Maté. I’m here with my colleague Ben Norton, a reporter at The Grayzone.

Ben, at The Grayzone we’ve been covering the US-backed coup and economic warfare attempt on Venezuela since the start. You have just come back from Venezuela after a few months. Talk to us about your impressions.

BEN NORTON: Yeah this was my second trip to Venezuela this year. And I will say that in some ways nothing really has changed, which is a good sign. There’s peace; there’s political stability; people have enough to eat; they have enough to survive; they’re getting the bare necessities.

But at the same time the economic situation is more difficult; it’s absolutely true. And you know corporate media outlets say Venezuela is a “humanitarian catastrophe”; there is this new Jack Ryan series; it’s all just ridiculous propaganda. But it’s true that there is a major economic crisis going on in Venezuela.

And for a lot of average Venezuelans, prices are out of control; inflation is really bad. And of course one of the main causes of this, not the only cause, but the largest factor behind the economic crisis is the embargo.

And people are really feeling the impact.

And in the eastern rich part of Caracas known as Chacao, a different district with a different local government which is controlled by the opposition, there is staunch opposition to the government.

But ironically at the same time the faction that the US government has chosen behind the coup, the Juan Guaidó folks, are actually quite unpopular, increasingly unpopular. And we at The Grayzone have reported on their corruption.

But what’s actually wild is I went to an opposition rally and there were like 50 people there. The opposition, the coup attempt has really fizzled out, and the opposition is not unified by these figures like Juan Guaidó, many of whom are in exile, opposition figures in Miami, in Colombia, who are lobbying for aggressive sanctions that are hurting average people. And it’s pretty clear, the effects are quite obvious.

AARON MATÉ: Speaking of sanctions, the US keeps imposing them on different aspects of the Venezuelan state. Recently again the Trump administration imposed new sanctions on CLAP, the Venezuelan food program that gives boxes of food to millions of Venezuelans every single month. Explain what’s going on there.

BEN NORTON: The CLAP food program is extremely important. More than 80 percent of the public in Venezuela receives these regular CLAP food boxes. And I went to a distribution site when I was there on this trip; we’re gonna have a report at The Grayzone showing how every single 15 days in some communities, or every 30 days in other communities, the government helps provide these giant boxes [or bags] of food with major staples — wheat, corn, condensed milk, lentils, oil, things that people rely on, the staples, to eat to survive.

And it’s not just government supporters that receive these boxes; it’s the vast majority of the population, more than 6 million families.

And Venezuela is still heavily reliant on food imports. But a new development that’s interesting: Now actually — so we were in Venezuela in February and March, and I returned in the last two months, in August and September — and what’s interesting is that the food boxes under the CLAP program have increased in size; there’s more of them; they’re bigger in frequency as well.

And also what’s interesting is that now the food-organized communities, the way the CLAP program is organized, is very efficient. Because thousands upon thousands of people, volunteers who are not paid, have worked together to organize their communities, to make sure people are not going hungry.

And it’s actually an example of the community stepping up and working in hand with the government; it’s not just the government doing this top-down approach; it very much is bottom-up.

And it has been very impressive to see that, as the crisis has gotten worse, the community has actually stepped up and organized, in alliance with the government.

AARON MATÉ: You mentioned earlier the fact that the support for the coup-plotters is declining, their protests seeing smaller numbers. Meanwhile you have negotiations going on between the Venezuelan government and other factions of the opposition.

There was recently some agreements made between the Maduro government and about four Venezuelan opposition parties, including the release of one prominent opposition member.

Guaidó and his faction were very upset about this. Do you think that they can hold on? Do you see, what do you see is their next move to try to keep their coup going?

BEN NORTON: The Trump administration has made it clear that it does not want any negotiations whatsoever with the government. This is in the words of Mike Pompeo a “maximum pressure strategy.”

And it’s really a strategy that sees diplomacy as a form of, as a concession. They want really diplomatic war; they want complete isolation diplomatically.

So it’s actually very important that elements of the opposition have made an agreement with the government. And it’s very telling that in response to that agreement, instead of welcoming this new peace and diplomacy, the prospects for actually trying to find a solution to the political crisis, the Trump administration released a statement saying that they refuse to recognize this “illegal” agreement, what they said is illegal.

Of course the irony is that they recognize this government that controls nothing. Juan Guaidó was barely known before the coup attempt was initiated. Something around 86 percent of Venezuelans had never heard of him, before he self-declared “interim president.” And he controls nothing.

Meanwhile when I was in the country, I saw many of the incredible projects that are still going on by the government, that is still very much in power, of Nicolás Maduro.

And I’m gonna have a report showing how this massive construction project is being overseen by women Chavistas, by feminists; 80 percent of the people building it are women themselves, 20 percent are men. And I have seen many of these other incredible projects.

Another thing that is a major problem going on in Venezuela right now is that this country is not food sovereign. It has, it really relies on imports. But in fact in the past several months I have seen the transformation, in this last trip just over six months. Now I have seen that in supermarkets, pretty much everything is made domestically.

The thing is it’s made domestically by a lot of private companies, and it’s in the private hands of these right-wing capitalists who support the opposition, who are price-gouging, who are hoarding goods, who are speculating.

So there are a lot of economic problems, and the sanctions are making things worse for average Venezuelans. So at the end of the day what it comes down to is that the US government has made it clear that it is not going to accept any kind of negotiation.

So the question is who in the international community is going to finally say to the US that you can’t continue to strangle Venezuelan civilians, that you have to be able to support some kind of diplomatic process to bring people to the table?

Norway sponsored the most recent peace talks that completely fell through because of the US declaration of the embargo. So until the US government, which is the one that is actually sabotaging the diplomacy and peace negotiations, until the US government actually takes a step back and allows this new process, and allows the new mechanisms to solve the economic problems in the country, I think things are going to continue as they are.

And they are very difficult. People are hanging on; there’s not a humanitarian catastrophe. But there is definitely an economic crisis, and it is really hurting average Venezuelans more than anyone else.

The sanctions are a war on the entire civilian population.

AARON MATÉ: And stay tuned for more of Ben’s reporting from Venezuela at thegrayzone.com. Ben Norton, thanks very much.

BEN NORTON: Thanks for having me