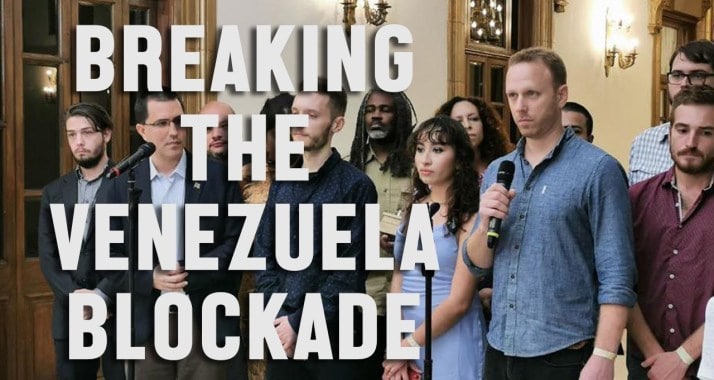 The Grayzone’s Max Blumenthal and the Embassy Protection Collective address the media after meeting with President Nicolás Maduro at Miraflores palace in Caracas, Venezuela.

Transcript
I am representing, alongside my colleagues Anya Parampil and Ben Norton, an independent media organization with no formal relationship to this government or any other government.

We are here because our government, and a corporate media which acts as an arm of its foreign policy, is pursuing a dangerous and catastrophic policy of siege and regime change.

RELATED CONTENT: US Activists Fought for Respect of International Law

We have seen the catastrophes that this same policy has caused for Central America, for Iraq, for Libya, for Syria, and for so many people across the world, in Korea, and elsewhere. And we are here to renounce this policy.

We are here as citizens and also as journalists, to break the blockade that our government has put not only on this government, but on relations between the American people and the Venezuelan people seeking to build a new society through the Bolivarian Revolution.

And it is for that same reason that we participated in an Embassy Protection Collective to not only defend the Venezuelan embassy, but to defend the principles of international law and the basic truth about this regime change policy.

We have absolutely no fear of any attack that occurs in the media or from our own government because we decided that the people of Venezuela, who are suffering under siege, should have relations with the people from America, and that we should listen and have a dialogue with each other.

RELATED CONTENT: “You Don’t Have Any Rights”: CBP Agents Interrogate US Citizen and Seize his Phone after Attending Sao Paulo Forum in Venezuela

We have no fear of any of the intimidation. And as you saw, when we were inside and outside the embassy, there was absolutely no fear of any attack or intimation.

So because our government, including many self-proclaimed progressives, refuses to sit down in dialogue with this government, and because our media refuses to go to the barrios and to meet with the campesinos who are suffering under sanctions, it is our job to do that for them.

We have come here in the spirit of peace and diplomacy, and we will return to our country to tell the truth about the crushing effects of sanctions, but also the gains of this revolution.

Nuestra lucha es la misma. Este es nuestro mensaje a usted. (Our struggle is the same. This is our message to you.)