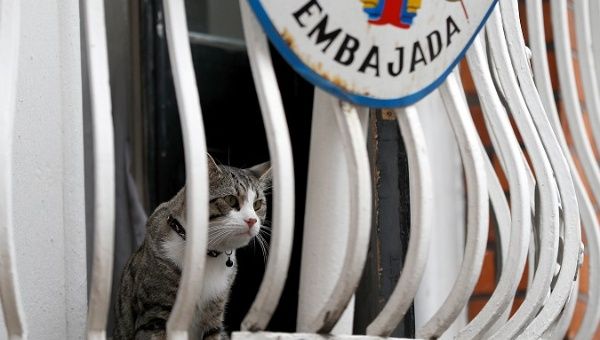 A U.S. journalist was locked in a room when she went to meet Julian Assange in the Ecuadorean Embassy in London.

Cassandra Fairbanks, a journalist from the United States said she was locked in a room in the Ecuadorean embassy in London when she went to interview WikiLeaks Founder Julian Assange who has been staying in the embassy for the past seven years and has been treated as a prisoner for the past two years under the government of Lenin Moreno.

Fairbanks also said she heard an intense argument between Assange and the staff when the latter prevented Assange from talking to the journalist.

It is the journalist’s third embassy visit in a year where she said, “the environment is getting worse and worse.”

Even though the journalist’s visit was pre-approved, she was locked in a room where she was supposed to have an interview in the presence of two surveillance cameras.

She also said the Ecuadorean authorities demanded the “brand, model, serial number, IMEI number, and telephone number” of her mobile as she was not carrying her phone.

“When Assange tried entering the room, he could not get in. The embassy staff demanded he undergoes a full-body scan with a metal detector before allowing him to enter the room,” said Fairbanks, adding that she had never seen anything like this during her previous visits.

“I do not want to do the body scan, it’s unworthy and it’s not appropriate, I’m just trying to have a private meeting with a journalist,” Fairbanks heard Assange say.

The door was closed immediately from outside preventing her from leaving.

“That’s when I realized that Ecuadorian officials had deliberately imprisoned me in a room… I found myself locked in a cold, surveillance room for over an hour by Ecuadorian officials, as a furious argument raged between the country’s ambassador and Julian Assange,” she said.

Later, the argument between Assange and the diplomatic staff started growing: “What are you afraid of regarding my meeting with a journalist? What is the embassy afraid of?” Assange asked according to the journalist.

Fairbank was then asked to leave as Ambassador Jaime Marchan wanted to meet with Assange. She could hear some parts of Assange’s conversation with the ambassador despite the staff’s attempts to conceal the debate.

“This is how you treat a prisoner, not a political refugee,” Assange complained to the ambassador, who said, “It’s for our protection and to protect you.”

“I am trying to have a private conversation with a journalist,” added the WikiLeaks founder, adding, “How can I safely convey the abuse and illegality that is happening to me here while I am under surveillance?”

At this point, he was asked to “shut up” by the ambassador.

“I know you want me to shut up, the Ecuadorian president has already gagged me,” Assange said in reply, adding that Marchan is “acting as an agent of the U.S. Government.”