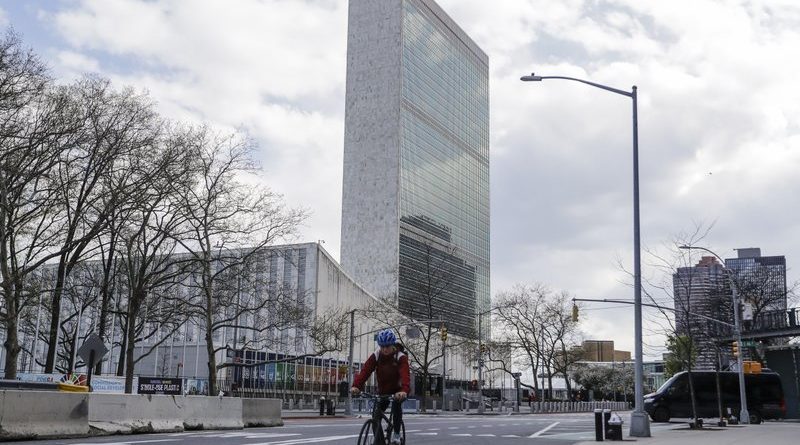 UNITED NATIONS (AP) — Russia is trying again to win U.N. General Assembly approval for a resolution on the coronavirus pandemic, dropping a call to end unilateral sanctions without U.N. Security Council approval but still calling for an end to protectionist practices.

The 193-member world body has until noon EDT on Wednesday to consider the revised Russian draft resolution, which is called a “Declaration of solidarity of the United Nations in the face of the challenges posed by the Coronavirus disease.”

The General Assembly instituted new voting rules because it isn’t holding meetings as a result of the pandemic. Normally, assembly resolutions are adopted by majority votes or by consensus, but now if a single country objects a resolution is defeated.

The original Russian draft resolution, which was co-sponsored by Central African Republic, Cuba, Nicaragua and Venezuela, failed to win apporoval on April 2. Diplomats said the European Union, United Kingdom, United States and Ukraine objected to it.

The revised Russian draft resolution, which was sent to member states Friday by General Assembly President Tijjani Muhammad-Bande, significantly increases the number of co-sponsors to about 30, drops a call to end trade wars, and adds a number of new provisions.

One addition expresses grave concern at “the negative impact of the spread of COVID-19 on public health and the global economy,” and makes a commitment to pursue “coordinated and decisive actions aimed at defeating the pandemic, guided by the spirit of solidarity and international cooperation.”

Another welcomes the April 3 statement by the Group of 77 and China — the main group of developing countries at the United Nations which now has 134 member states — on COVID-19, calling it “a strong message of solidarity in the face of the pandemic from the developing world.”

RELATED CONTENT: Putin and Xi Reject Politicization of the US COVID-19 Outbreak

The G-77 statement includes a call on the international community “to adopt urgent and effective measures to eliminate the use of unilateral coercive economic measures against developing countries,” saying that at this juncture they have “a negative impact” on the ability of countries to respond to the pandemic.

The General Assembly adopted a resolution on COVID-19 on April 2 sponsored by Ghana, Indonesia, Liechtenstein, Norway, Singapore and Switzerland. It recognizes “the unprecedented effects” of the coronavirus pandemic and calls for “intensified international cooperation to contain, mitigate and defeat” the COVID-19 disease.

Muhammad-Bande, the assembly president, sent a Mexican-drafted resolution to member nations on Thursday calling for global action to rapidly scale up development, manufacturing and access to medicine, vaccines and medical equipment to confront the coronavirus pandemic. Member states have until 5 p.m. EDT on Monday to object.

South African and Egypt are also reportedly preparing draft resolutions on COVID-19 to put before the assembly.

Some diplomats believe the world body should draft an omnibus measure instead of considering many separate ones. Its resolutions are not legally binding but are an important gauge of world opinion.

The more powerful 15-member Security Council, whose resolutions are legally binding, has not adopted a resolution since the pandemic began circling the globe, infecting more than 2.1 million people and killing more than 140,000 worldwide, according to a tally by Johns Hopkins University.

Its five permanent members, who have been divided on how to address the pandemic, are discussing a French-drafted resolution while its 10 elected members have their own draft. Diplomats said discussions have started on merging the rival texts.